A LARGE group of mostly young people gathered in central Bratislava on March 15 to protest against fascism, racism and xenophobia. 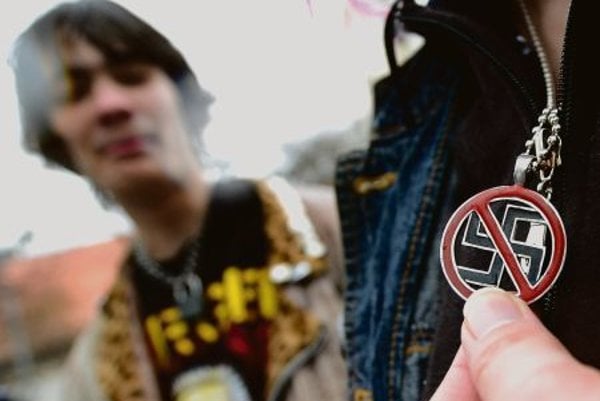 A LARGE group of mostly young people gathered in central Bratislava on March 15 to protest against fascism, racism and xenophobia.

The protest, entitled ‘Together against Fascism’, was held to mark the 75th anniversary of the creation of the wartime Slovak state (March 14, 1939), and according to one of the organisers from the Bratislava Without Nazis initiative, Robert Mihály, their aim was, first and foremost, to prevent a neo-Nazi march through the city of Bratislava to the grave of the president of the wartime Slovak state, Jozef Tiso.

While the TASR newswire reported 100 attendees, the SITA newswire recorded about 300 protesters.
Mihály said the protesters succeeded in preventing the annual neo-Nazi march, which has always been held on the anniversary of the creation of the wartime Slovak state.

The protesters sought to recall the horrors of the Second World War.

“The protest, however, is also a reaction to recent events in our country, as for example, the recent attacks by neo-Nazis in Nitra,” Mihály said, as quoted by TASR. “Today’s march is a clear ‘no’ to fascism in all of its forms. It publicly rejects nationalism, neo-Nazism, anti-Semitism and, on the contrary, voices the message of a tolerant and inclusive society.”

The march against fascism was supported by many public figures, including Bratislava Mayor Milan Ftáčnik, on whose initiative Bratislava City Hall flew a flag with a crossed-out swastika from the balcony of the Primate’s Palace.

“We believe it is important for this silent majority to express its opinion and I personally also very expressly and clearly avow to the anti-fascist tradition that our Slovak Republic is built on,” Ftáčnik told the crowd, as quoted by SITA. He added that the wartime Slovak state cannot be celebrated because it was a state that relegated a portion of its population to the status of second-class citizens.

The crowd then marched through the streets of Bratislava’s historical centre to the Holocaust memorial near the SNP Bridge.

Meanwhile, Banská Bystrica Regional Governor Marian Kotleba, who has a history of making fascist statements and whose election to the post in the fall of 2013 shocked the country, participated in the celebrations of the wartime state anniversary in Nitra. He used the occasion to announce that he had the EU flag removed from the regional office.

“These occupational blue rugs should not remind us anymore of how we totally lost our national and state independence,” Kotleba told the crowd of about 60 people, as quoted by SITA. He said that not even Hitler dared to do what the EU does now, since none of the public offices in Slovakia displayed the German flag at that time, apart from the German embassy.

Kotleba also announced that his People’s Party-Our Slovakia is planning to run in the European Parliament elections, as well as in Slovakia’s next parliamentary elections. He criticised same-sex partnerships, teaching English in schools and the promotion of multiculturalism in education.

The European Commission (EC) has repeatedly warned about the dangers of increasing populism, xenophobia and the spread of anti-European sentiments, the Representation of the EC in Slovakia’s spokesperson Andrej Králik said, as reported by SITA.

“Before the European Parliament elections in May, the democratic political forces in the member states should join in the interest of the European project and the values that the community of European states is based on,” Králik said, adding that the EC will stand in the first line of those who support the basic European rights, freedoms and values.