Will Procházka make it big?

IT WAS well past midnight when Radoslav Procházka and his wife stepped in front of the cameras on election night, appearing rather tired and slightly disappointed. They missed the run-off by some 3 percent of the vote. But hardly anyone in Slovakia would deem his result a failure. 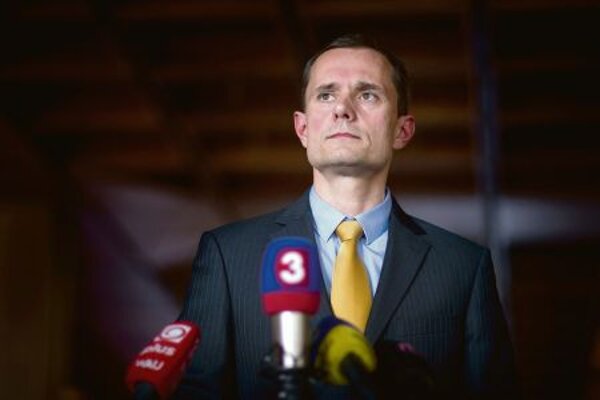 IT WAS well past midnight when Radoslav Procházka and his wife stepped in front of the cameras on election night, appearing rather tired and slightly disappointed. They missed the run-off by some 3 percent of the vote. But hardly anyone in Slovakia would deem his result a failure.

Procházka’s disappointment was not the sort that Robert Fico experienced when the election results were published. While Fico saw his support decline dramatically since the 2012 parliamentary election, Procházka saw his electorate swell from the 8-10 percent forecast by the polls, to over 20 percent.

The election campaign, especially its final stage, changed everything for Procházka. Before that, his Alfa project, which observers appreciated for its clear vision for the country’s future, was nevertheless a political underdog with little support in political circles, mainly due to Procházka’s reputation as a lone wolf. With his vote gains in the election, however, many believe he has shed his underdog status.

“Procházka received such a decent number of votes that he can be considered in the future as a relevant political personality,” political analyst Juraj Marušiak told The Slovak Spectator. “It will now depend on him, on how he will be able to make use of this result and whether he will be able to build up some team of collaborators and become a real leader. That’s important for every politician, that there is no leader without a team.”

Procházka spoke along the same lines when he gave a press briefing in parliament on March 18.
“I understood a long time ago that politics is no place for soloists, that it is made for teams, for strong compositions, for team games, and that’s the way I want to go,” he said.

When asked about his political future, Procházka, who currently serves as an independent MP, said he has scheduled several important meetings for the rest of the week and he will inform journalists shortly about whom he met with and the results. He did not rule out talking to former prime minister Iveta Radičová.

The names of Slovak Democratic and Christian Union (SDKÚ) defectors Miroslav Beblavý and Lucia Žitňanská were also mentioned during the press briefing, but Procházka did not comment on them.

He repeated his previous claim that he was not going to establish a new political party as long as he is serving as an MP – but failed to specify whether he was going to leave his parliamentary seat.

“I want to be the provider of an honest, professional service to people, and that cannot be done another way than by participating in political competition and winning a political mandate; winning the trust of the citizens,” Procházka said during the press briefing. He refused to be more specific about his future plans, and he several times repeated that politics needs to be turned into a service for people rather than a tool for personal gain.

When asked whether his ambitions reached as far as becoming the prime minister, he said: “I haven’t visualised and materialised that idea yet, but I feel that if I did so, I wouldn’t be alone with that idea.”

Most political analysts cited Procházka’s high placing in the election as among the surprises of the first round.

Martian Slosiarik of the Focus polling agency ascribed Procházka’s high result to his campaign’s finale, which he believes was better than those of the other candidates.

“He apparently appealed to undecided voters too, not only those who hesitated between [Andrej] Kiska, Procházka and [Milan] Kňažko,” Slosiarik told The Slovak Spectator.

Grigorij Mesežnikov of the Institute for Public Affairs believes Procházka’s success was driven by his performance in the televised debates, but also by his intensive campaign, during which he travelled around Slovakia and met a lot of voters.

Additionally, the fact that the partisan candidate Pavol Hrušovský was a weak one helped the non-partisan candidates, mainly Procházka, who had the biggest potential to appeal to the supporters of the KDH, especially the less conservative ones.

“He is an interesting man, he shined in the debates with his good preparation, and his expert stances were convincing,” Mesežnikov concluded.

Marušiak added that Procházka did well to distance himself from the ‘old’ centre-right, which probably improved his support.

Procházka votes for Kiska, but what about his voters?

On election night Procházka told journalists to wait 48 hours until he would answer their questions about his future and whether he would support Kiska, who advanced to the second round to face Robert Fico.

“I will vote for Andrej Kiska,” Procházka said on March 18, adding that he must honour his pre-election pledge to support any rightist candidate who will make it to the run-off.

He admitted that Fico might be the best candidate to represent Slovakia internationally, but Slovakia needs balance and a counterweight for the ruling power.

Regarding Procházka’s support for Kiska, Slosiarik noted that voters do not automatically behave as their candidate tells them to, “but it is a certain political gesture that serves as a sort of basis for the mobilisation of voters for the second round”.

All the political analysts and pollsters that The Slovak Spectator spoke with agreed that Procházka’s stance is very important in that sense, but that does not mean Kiska can count on those 400,000-plus votes that Procházka received in the first round unconditionally.

“If they go to vote, I think they will vote for Kiska, but it is quite possible that not all of them will go to vote,” sociologist Pavel Haulík told The Slovak Spectator, adding that Procházka’s stance will not be the only factor that will matter, but also the campaign leading up to the run-off will decide whether Kiska manages to convince Procházka’s voters that he is a competent candidate for this office.

Procházka said during his press briefing that his voters proved in the first round that they had minds of their own and followed their own decisions when they voted for him, despite the rather low numbers he was getting in the polls.

“My voters were stubborn, they voted freely, with courage, and I have huge respect for that,” he said, adding that the respect means he knows they are not a flock of sheep that will vote for whomever he recommends.