THE NUMBER of Slovaks filing for personal bankruptcy set a new record in 2013 and is expected to rise even more this year, yet fewer people are taking advantage of this option than in neighbouring countries. Experts and market watchers say excessively demanding laws are behind the low numbers, but the Justice Ministry is working on changes to ease the personal bankruptcy rules. 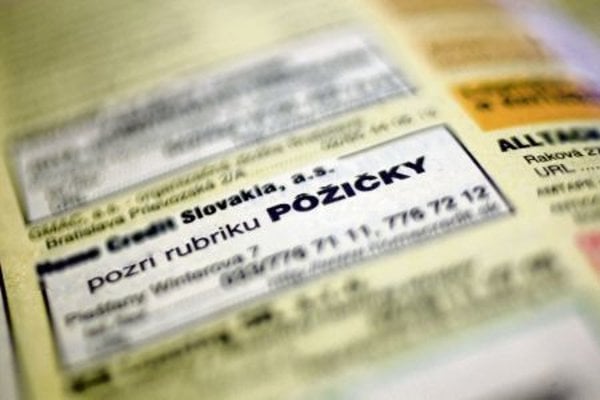 People sometimes get into a vicious circle of debt. (Source: SME)
Font size:A-|A+0

THE NUMBER of Slovaks filing for personal bankruptcy set a new record in 2013 and is expected to rise even more this year, yet fewer people are taking advantage of this option than in neighbouring countries. Experts and market watchers say excessively demanding laws are behind the low numbers, but the Justice Ministry is working on changes to ease the personal bankruptcy rules.

In 2013, 353 individuals filed for personal bankruptcy in Slovakia, representing 114 cases or 47.7 percent more than in 2012, based on statistics of the CRIF – Slovak Credit Bureau. At the end of 2013, the number of personal bankruptcies more than doubled when compared with 2011, when the CRIF – Slovak Credit Bureau registered its first significant rise, up 55.66 percent to 165, which it ascribed to the economic crisis.

“The reason for the increase in the number of personal bankruptcies in Slovakia was the growth of the inability of private individuals to settle their financial obligations,” Jana Marková, chief analyst at CRIF – Slovak Credit Bureau, told The Slovak Spectator.

The Právne Centrum law firm confirms a growing interest among individuals in filing for bankruptcy.
Recently, Slovaks have become increasingly interested in resolving their financial problems through personal bankruptcy, Katarína Bystrická from Právne Centrum told The Slovak Spectator, adding that “the most numerous group are people who have gotten into a difficult financial situation as a consequence of taking on a disproportionate number of loans and credit with banks or non-licensed financial companies, often accompanied by the loss of regular income.”

Bystrická specified that in the beginning most clients are not aware of all the legal requirements that come with filing for bankruptcy.

“It happens that after becoming familiar with the conditions, their initial interest decreases and they drop the idea [of filing for personal bankruptcy],” said Bystrická.

Prvá Oddlžovacia, which provides services to people who are unable to manage their debt, agrees that Slovaks know little about filing for bankruptcy as a way to get out of their desperate financial situation. This means that for some it is too late, as they no longer have the minimum assets required to successfully file for bankruptcy.

Under financial obligations, the CRIF – Slovak Credit Bureau considers all debts, not just bank loans, mortgages or forms of credit taken from non-licensed financial institutions, but also all debts for delivered but unpaid goods and services. Marková explains that in some cases these debts may gradually become unmanageable and result in a situation from which the debtor cannot escape. The exact level of debt in such cases can vary from person to person – ranging anywhere from €10,000 to €100,000.

Slovakia’s current legislation does not set a minimum level of debt for filing for bankruptcy – this is left entirely up to the debtor. The law only sets a minimal value for the debtor’s assets, €1,659.70, as a condition for declaring bankruptcy. If the value of the debtor’s assets is lower, the court would halt the proceeding. The debtor also must be able to cover any fees linked with the bankruptcy proceeding.

Marková explained that Slovaks typically fall into debt because they have lost their job or are working less due to illness, but low wages, a consequence of stagnant wage growth, also prevents people from being able to cover rising living costs.

“Slovakia does not differ in terms of the most commonly cited reasons for personal bankruptcy from other countries,” Marková said.

According to Bystrická, the advantage of filing for bankruptcy is that once a debtor successfully completes the entire two-phase process, he is no longer responsible for any unsettled debts, which are part of this process.

The disadvantage is that the debtor has to sell all of his property, while the whole process, which takes place under close scrutiny of the court, is time-consuming and financially draining.

Prvá Oddlžovacia considers it an advantage that after successfully completing the whole process, one gets a second chance and can start again from the beginning. The disadvantage is that the current personal bankruptcy scheme is not even an option for a person in material need.

The process of filing for personal bankruptcy is considered to be especially demanding, as debtors are required to sell all of their property and then allocate a significant portion of their income for the next three years to settle their debts. In some countries the process is simpler, whereby debtors can decide whether to sell their assets, and creditors do not have a claim on their future income, or debtors keep their assets and pay most of their income to creditors for a set period of time, the SITA newswire wrote.

Yet, the ministry is currently working on an amendment to the existing personal bankruptcy legislation, and plans to introduce the changes - which could become effective in late 2015 - later this year. Justice Ministry spokesperson Alexandra Donevová explained that the changes are to tie in with the European Commission’s efforts to devise within the EU comparable rules for cases when, as a consequence of a poor business decision, a private individual is not allowed a second chance.

“The main aim of the change to the Act on Bankruptcy and Restructuring, which is under preparation, is making the scheme of personal bankruptcies functional,” Donevová told The Slovak Spectator, adding that comparisons of statistical data indicate that the number of personal bankruptcies in neighbouring countries is several times higher than in Slovakia. “We believe that the situation of consumers in neighbouring countries does not differ so much [from that in Slovakia] to explain such a high difference.”

The fact that a consumer cannot eliminate his debt without selling all of his assets, and is at the same time required to prove that he is actively looking for a job or starting a new business, is considered by the Justice Ministry to be one of the chief shortcomings of the current law, and the reason why comparatively few people file for bankruptcy. However, to do this, he needs to have at least met the minimum requirements in terms of home or business-related assets, said Donevová.
According to Bystrická, eliminating those legal conditions should encourage more people to file for bankruptcy.

Prvá Oddlžovacia also views Slovakia’s personal bankruptcy process as too demanding, and hopes that the new legislation will make it available and affordable to more people.

When comparing bankruptcy statistics of the CRIF – Slovak Credit Bureau in Slovakia and the Czech Republic, the number of personal bankruptcies in both countries has been increasing in annual terms since 2008, but the growth patterns differ. While Slovakia registered the biggest annual increase between 2010 and 2011, up 55.66 percent, in the Czech Republic the growth dynamics of bankruptcies has been decreasing since 2009, except for a year-on-year change between 2012 and 2013 (up only 13.03 percent), but still remained higher than in Slovakia.

Marková said more debtors in the Czech Republic file for bankruptcy than in Slovakia because the process in the latter is more stringent.

In Slovakia when a debtor files for bankruptcy, his assets are sold and the revenues are used to settle any enrolled debts. But the debtor must pay hundreds in fees. Next, the debtor enters a three-year probationary period during which he must meet additional obligations ordered by the court, which can include allocating up to 70 percent of the debtor’s income toward his debts. Once these conditions are met, any remaining debts at the end of the probationary period can then be cancelled by the court.

According to Marková, in the Czech Republic personal bankruptcy is considered to be the most convenient way to eliminate debt.

“The main reason is the relatively low financial demands,” said Marková, adding that the debtor needs to settle 30 percent of his debt during a five-year period, and is obliged to pay fees to an insolvency trustee. After this period, the debtor is no longer required to pay the remainder of his debt.

The CRIF - Slovak Credit Bureau in Slovakia expects a further increase in personal bankruptcies in 2014.

“Even though outlook prognoses for development of Slovakia’s economy in 2014 are in most indicators more favourable than they were for 2013, and a faster economy, a moderate drop in unemployment as well as bigger growth of the nominal wage in the country’s economic growth are expected, we assume that the number of personal bankruptcies will also increase in 2014,” Marková said. “Citizens took out loans to a bigger extent in a period of favourable economic development, and their financial problems grew gradually. Many of them have already used up their financial reserves, and improving their financial situation, even in the case of fulfilment of the prognoses, has not to be sufficient for covering their obligation in full.”