FEW OF world-famous Czech artist Alfons Mucha’s works have been exhibited outside the Czech Republic, especially those owned by the state. Now, a comprehensive exhibition at the Bratislava City Gallery (GMB) can satiate one’s hunger for the works of a man who helped launch the Art Nouveau movement. 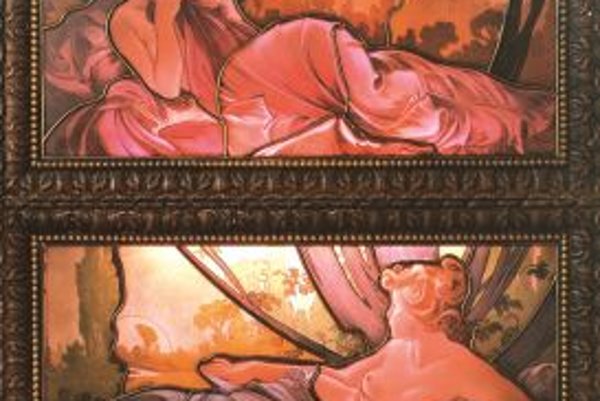 FEW OF world-famous Czech artist Alfons Mucha’s works have been exhibited outside the Czech Republic, especially those owned by the state. Now, a comprehensive exhibition at the Bratislava City Gallery (GMB) can satiate one’s hunger for the works of a man who helped launch the Art Nouveau movement.

The exhibition at the GMB’s Mirbach Palace can offer something to those who saw the collection of Mucha’s works in Prague last year, as only five of the works are repeated here. The selection is also comprised of some of his lesser known works, like banknotes designed for the new Czechoslovak state, postage stamps and the first state emblem. Spread across an entire floor, the exhibition presents his work dating back to his studies in Munich through his stays in Paris and the US, and his return to his homeland.

“It took us more than a year to collect all these works,” Czech curator Jan Kukal said at the opening. All 73 of them were culled from 12 galleries and many private collectors. Even famous pieces that are familiar to casual fans can surprise visitors when seen up close, like the popular poster Gismonda, on display here in a colourful tempera version. In addition to studies of paintings from his renowned Slav Epic cycle, the exhibition includes works from the equally extensive but lesser known series The Blessed.

“We were very lucky,” Kukal said. “Slovakia signed immunity against confiscation – and thanks to this, all these could have been brought here. Several years ago, our state lost an international arbitration and three works were confiscated based on this, and since then, none of Mucha’s artworks were allowed to leave the Czech Republic. This made galleries eager to show their exhibits abroad, and made it easier for us to borrow them.”

Mucha led a turbulent life, and he died in 1939 after rough interrogations by the Nazi Gestapo. His work might well have been forgotten after the Second World War were it not for his son, writer and journalist Jiří Mucha, who helped restore his father’s fame. The current exhibition, Alfons Mucha - The Road to Glory, is dedicated to his son.

The accompanying 50-page catalogue contains an introduction in Slovak and English and photographs of some of the exhibited items reproduced on high quality paper. It costs €10, as well as each of the three posters that are on offer.

“We have seen a lot of Mucha lately,” connoisseurs of the artist said in the Mirbach Palace, “but his works shown here are really different: a big, exceptional collection showing all the various facets of his mastery.”

When asked by The Slovak Spectator why this exhibition – which clearly has the potential to attract many visitors – lasts only until May 11, 2014, gallery director Ivan Jančár explained that the works on paper cannot be displayed for longer than three months, and have to be taken down and stored in the dark for some time afterwards. More detailed information can be found on the gallery’s website, gmb.sk.