FOR NEARLY 200 years, from the early 16th century through the early 18th century, the Kingdom of Hungary was more or less in a constant state of war. First, the country was ravaged during the conflicts with the Ottomans, and later, anti-Hapsburg revolts further contributed to the devastation. 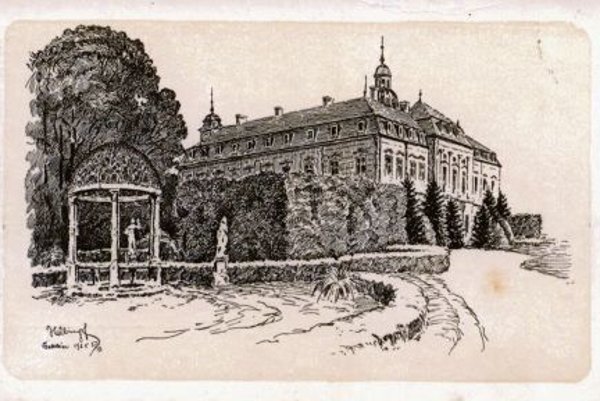 As elsewhere, periods of destruction in Hungary were typically followed by a construction boom. One monument built in a period of calm is a palace located just outside Bratislava, in Bernolákovo. The Esterházys, one of the most influential noble families in the region, had it built near the ruins of the medieval Čeklís castle. Construction took place between 1714 and 1722, resulting in a Baroque estate. The mansion was designed to co-exist harmoniously with its surrounding environment - a novel concept at the time.

A vast park was created around the palace, containing numerous statues, which unfortunately were not preserved. But we can see one of them in this postcard dating back to 1925. The postcard is a replica of a painting by an unknown artist whose signature is illegible.

The 20th century was hard on such palaces. However, the Bernolákovo mansion was lucky, although it did not go completely unscathed. It was first hit by a big fire in 1911, which destroyed its Baroque murals. In 1945, it was damaged again during the Second World War. Fortunately, the mansion was restored after both disasters.