Living in a multigenerational household 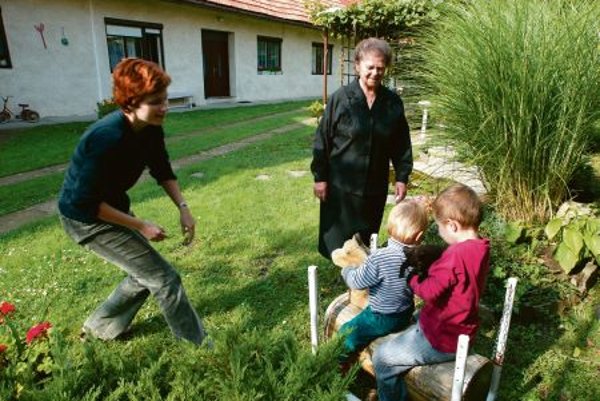 WHILE young people with a partner usually leave their parents’ home there are still thousands of households with multigenerational families in Slovakia. While such households lessen the effects of economic hard times, the loss of privacy and unclear roles threaten even the most tolerant relationships.

“I see the cohabitation of multiple generations as a uncomfortable for all sides,” Katarína Sirotná, the 30 years old state administration employer who has been living with her parents and grandparents since childhood, told The Slovak Spectator. “Yes, they may help to each other but relying on my own experience, I think it is rather harmful.”

There were 201,020 households in Slovakia with three generations of people who are in parents-children-grandchildren relation, according to data from the census conducted in 2011, Statistical Office spokesman Marián Jánošík told The Slovak Spectator.

Young couples usually live together with one of their parents until they find their own house or make enough money to buy it, Bernardína Bodnárová a researcher of Institute for Labour and Family Research, a state funded organization, told The Slovak Spectator. The country’s tough economic situation makes some more hesitant to leave their parents than they otherwise might be, she said.

Slovaks have traditionally lived in multigenerational households as well, because life was often bounded to manual work and the more potential workers the better. It was simply advantageous for such families to have many people under one roof, psychologist Dagmar Kopčanová from Research Institute for Child Psychology and Pathopsychology told The Slovak Spectator.

However, families, who decided to live in such households in the present, should have enough space and privacy if they want to coexist with another family peacefully, Martin Miler, president of the Slovak Psychologists Chamber, told The Slovak Spectator. Such households should have a form of separated housing units, but under one roof. In such cases the joint household can bring advantages while also maintaining some sense of privacy.

“After some time my parents even lowered the number of visits in our house because our relatives were disturbing grandma and grandpa,” Sirotná said.

Tensions occur since older family usually adopts a role of the household ruler. While mother or mother-in-law usually wants to be “queen of the kitchen” the father or father in law “rules” the rest of household, Miler says.

The Slovak culture moved from traditional multi generational living to modern western way of life and the opinion of older people is not so highly valued as it used to be in past, he says.

“In our culture we prefer independence,” Miler adds.

The situation and atmosphere in multigenerational families much depends on whether the arrangement is necessary or it is voluntary between both families. Families who live together more or less involuntarily have great potential for escalating conflict, according to Bodnárová.

“Every [family] member has their own needs, a different daily schedule and otherwise good relationships could worsen,” Bodnárová said. “There will be problems which would not occur in cases of separated living.”

Before she moved to Bratislava, Kristína, a 23-year-old student, was living in family house in Považská Bystrica with her parents on ground floor and grandparents on the first floor. Living with grandparents brought her family a lot of conflict situations, she said. For example, Kristína’s family had a small field in its backyard and Kristína’s mother had to till the soil despite wanting to have lawn instead. It was because her-mother-in law wished it, Kristína told The Slovak Spectator.

Miler explained that conflicts are very often present in multiple-generations households in cases when relatives do not agree on common rules in advance.

Naturally, the multigenerational household affects a child’s upbringing as generally speaking the wider and richer a social environment is, the more stimulation a child receives, Kopčanová said.

Such households may be pleasurable environment for children as they usually enjoy company of older people, and vice versa, according to Miler.

Moreover, busy parents of small children may no longer need a babysitter. Older people are usually much more patient with kids and give much more love to their grandchildren than babysitters for hire, Kopčanová said.

As a little girl, Kristína loved to be with her grandparents since they took care of her and always made sure there was good food around, she said. She also used them as important instrument during negotiations with her parents. For example, as a child she badly wanted a rabbit but her parents refused to buy it, she said. Therefore Kristína changed her strategy and approached her grandparents with the demand.

“I persuaded my grandfather; we went to the cellar and he constructed a sort of rabbit cage because he is very dexterous,” Kristína said. “There was a rabbit cage therefore a rabbit had to follow. So I got a rabbit.”

Another positive aspect of multigenerational families is that children learn how to behave towards older people, according to Bodnárová.

“Little children and later young people see for a long time how their parents take care of their parents and behave towards them and they will probably follow a similar script in their own lives,” Bodnárová said.

But such a household is a double-edged sword, since the social environment could involve both kindness and conflict and children may witness conflicts more often than their counterparts living in single-family units, according to Kopčanová.

“In hindsight I see that my grandparents were intervening in my parents’ decision making and the way my parents were bringing me up, which resulted in mutual tension,” Sirotná said.

Psychologists and sociologists advise young couples to leave multigenerational households and live in their own home. It is much easier for them to make clear their role in the relationship; they will enjoy more privacy and have fewer arguments with family members.

“Multigenerational households may work in cases when bonds are strong between people, when a new [family member] is tolerant and there are proper relationships,” Miler said. “However, in general, people want to be independent and they should be.”

Focusing on kids with hardships

MORE than 55,500 children were born in 2012, some 5,200 fewer than the year before, the SITA newswire reported. And according to forecasts, this number will continue to gradually decrease.

Since 2004, Slovak courts have sentenced more than 1,700 people for sexual abusing children younger than 15. In 2012, courts sentenced 262 abusers, the highest number in one year, while that same year another 77 cases of child sexual abuse were reported. However, those numbers are inaccurate since many sexual abuse cases go unreported. Professionals say that molesters sexually abuse children repeatedly or often target several victims.