CAMPAIGN FEVER is spreading as Prime Minister Robert Fico faces philanthropist Andrej Kiska in the presidential election second round run-off March 29. Surprising statements in recent days indicate it may be getting to the candidates, including those already out of the race. 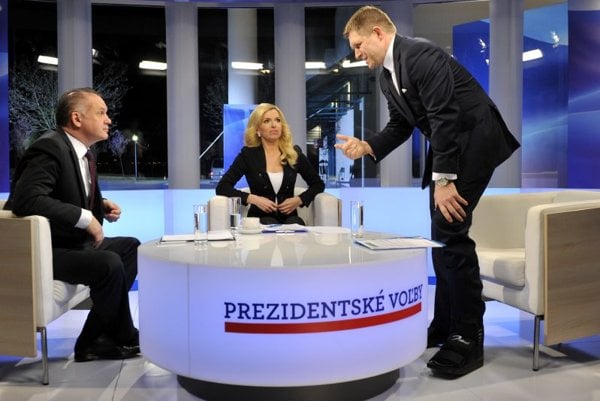 CAMPAIGN FEVER is spreading as Prime Minister Robert Fico faces philanthropist Andrej Kiska in the presidential election second round run-off March 29. Surprising statements in recent days indicate it may be getting to the candidates, including those already out of the race.

In a shift, Fico recently recommended that Supreme Court President Štefan Harabin – a long-time ally – not run for re-election arguing that he “divides the judiciary”. The premier went on to say that “these are not times when states should join other countries which would attack within NATO”, a reference to tensions with Russia in neighbouring Ukraine. Media reported the serving prime minister as saying that if for any reason he fails to win sufficient support of his voters he would reconsider ending his political career altogether. Fico, during a debate organised by HNonline, called the report gossip, adding: “If I want to state something similar, I would tell it to cameras”.

Meanwhile, a press conference at which independent MP Radoslav Procházka and former actor and Velvet Revolution leader Milan Kňažko, who ended up third and fourth in the first round, were expected to voice unambiguous support for Kiska on March 25, took a surprising turn: Kňažko failed to attend, while Procházka called on voters to make their own decision, the Sme.sk website reported. Kiska, nevertheless, excused Kňažko suggesting that even if he could not come in person, he has already supported him in the race. Procházka later described his action as “clumsy communication” and the next day voiced support for Kiska at a separate press conference. Kňažko wrote a blog stating that he would vote for Kiska.

Fico and Kiska met in three major debates thus far. On March 22, they met in the building of the public-service radio for a debate that was also broadcast on the TV channel of the public-service RTVS. Contrary to the calm tone of that debate, the March 23, on the news-channel TA3, the candidates clashed somewhat harder. The presidential debate broadcast by private Markíza television on March 25 featured most of the previously voiced arguments and counter-arguments.

Fico’s presidential campaign has revolved around insisting Kiska has alleged connection to the Church of Scientology, and raising questions about Kiska’s business career heading rent-to-own companies Triangel and Quatro.

“One of your firms is called Triangel, right,” Fico asked during the TA3 debate. “The sign of the Church of Scientology is a triangle. Mr Kiska you are interconnected with this sect and you have not negated any of the evidence I presented.”

Kiska responded that the company Triangel was established as a sister organisation of the Triangel Group International, a company from North Carolina, owned by Kiska’s friend. “All companies in North Carolina, since there is a triangle of large cities, include the triangle word in their names. If you think that anything that appears anywhere and includes the triangle in its name has something in common with a sect, then it is ridiculous,” he said during the TA3 presidential debate on March 23.

For the first time, Kiska acknowledged on March 26 that such repeated attacks might be affecting voter opinion.

Fico during the March 23 debate also has said he would have been happier if he faced Procházka or Kňažko because in this case he could be certain that the country would normally function even in the event of his defeat and that there would be no surprises.

Kiska responded that “if there is anything in Slovakia which should be banned and which should not function because it threatens our defence and security, then it should be noted that you have been a prime minister with little break for almost six years and also had the chance to ban or dissolve [these threats]”.

If both candidates faced security clearings, Fico would be more in danger of failing to get a security screening, Kiska said hinting at an audio recording featuring a voice strongly resembling that of Fico. The recording, published couple days before the parliamentary elections in 2010 by the Sme daily, suggested that Smer had accepted undeclared campaign contributions from off-the-books sponsors.

“A voice resembling yours spoke about how he secured Sk75 million for illegal financing of a political party,” Kiska said during the TA3 debate. “You were in the government when it was miraculously allowed to rob all our people of almost €50 million through emission allowances.”

Kiska also reproached Fico for failing to answer the question whether he ever visited the apartment on Vazovova street featured in the so-called Gorilla file containing transcripts of conversations covertly recorded at that apartment by the SIS intelligence agency in 2005 and 2006 involving a financial group and high level political figures.

Speaking on Markíza, Fico lashed out at Kiska suggesting that he no longer can call himself an independent candidate because he is being supported by opposition parties which in the past formed what Fico called unsuccessful governments. Fico, nevertheless, claimed that his candidacy is supported by, among others, French President Francois Hollande and Catholic Cardinal Ján Chryzostom Korec.

Kiska rejected Fico’s claims arguing that “all the political parties had their own candidate” and added that he had made a public promise that he would not take a single cent for his election campaign from political parties.

“I cannot imagine that someone has his whole campaign paid for by a party and that this man then stands up and says that from now on he is independent”, Kiska said.

When asked to assess the candidates’ performance, political analyst Martin Klus suggested that even though Kiska improves with every debate, it’s clear the prime minister is a much more eloquent talker and orator, the TASR newswire reported.

“Fico, on the other hand, makes significantly more mistakes than Kiska in debates,” Klus told TASR.

However, analysts also say that Fico will use the hesitation by Procházka and Kňažko to back Kiska with Grigorij Mesežnikov, president with the Institute for Public Affairs (IVO) suggesting that “it is unclear whether the declaration of support would have had added value”, the SITA newswire reported.

According to Mesežnikov, the voters of both failed candidates are already sufficiently mobilised against Fico.

“In the case of Procházka his disappointment over not making it to the second round might have played a role,” Mesežnikov told SITA.

Procházka did not clearly endorse Kiska, saying he respects voters enough not to recommend whom they should vote for: “It is important that people will choose [the candidate] on their own”, he said.

Procházka however after rather fiery responses on the web and social sites wrote an entry on his social site profile claiming that “I admit, I underestimated the need to restate why I will vote for Andrej Kiska. My bad, Sorry. Will fix it soon”. The next day, Procházka summoned a special press conference at the parliament and announced that he will vote for Kiska.

“Slovakia needs a change and a hope and it is Kiska for Slovakia,” said Miroslav Beblavý, former member of the Slovak Democratic and Christian Union (SDKÚ) now without affiliation, who accompanied Procházka along with Andrej Hrnčiar from Most-Híd, Sme reported.

Kiska apologised for Kňažko, saying that he wants to “thank him for expressing his full support to me in the second round”, however offering no explanation why Kňažko failed to show up.