DOUBLE crosses seen in pictures and portraits of the president of the wartime Nazi-allied Slovak state carried by groups of skinhead youths marching the streets of Bratislava during the mid-March anniversary of the founding of that state: this is a common image each year on March 14. 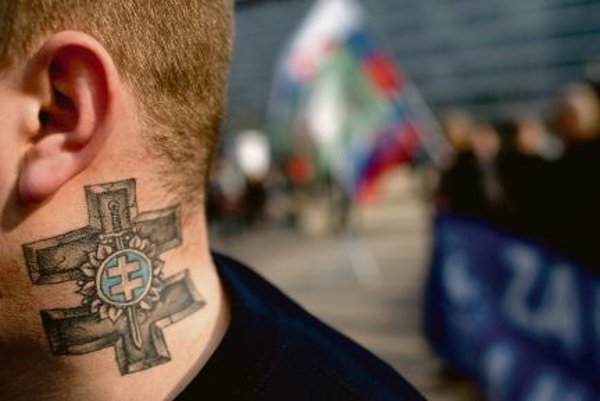 DOUBLE crosses seen in pictures and portraits of the president of the wartime Nazi-allied Slovak state carried by groups of skinhead youths marching the streets of Bratislava during the mid-March anniversary of the founding of that state: this is a common image each year on March 14.

But this year’s 75th anniversary version was different, as anti-fascist activists organised a protest gathering to prevent right wing extremists from marching to the alleged grave of Jozef Tiso, Slovakia’s wartime president, as present day extremist groups continue to draw on symbols and narratives from that era.

It’s not just the occasional pensioners who grew up during the war and have a tendency to glorify the Nazi-allied Slovak state, as recent months have shown that narrative is entering the mainstream. Much like elsewhere in Europe, the far right in Slovakia appears to be gaining momentum.

These moods culminated in Slovakia in November 2013, when noted extremist Marian Kotleba won the regional election in Banská Bystrica and became the region's governor.

While politicians blamed each other for this development, analysts noted it as a sign of latent racism and xenophobia present among the Slovak population. Kotleba was particularly successful in riding a wave of anti-Roma sentiment. His victory came as a shock to most people in the country, as did the video that the Sme daily published some months later, showing a group of skinhead youths brutally attacking the clients and the owners of a bar in Nitra.

Human rights activists warn that the likes of Kotleba now work in a more sophisticated way, often using softer language than they did in the past to convey the same extremist ideas. The most radical of the extremist groups remain committed to openly anti-Semitic claims, including arguing that the wartime Slovak state acted legitimately when deporting Jews during the Holocaust, said Šimon Seman from the People Against Racism NGO.

“Their claims are linked with the picture of a Jew as the universal enemy who is trying to impose the new world order,” Seman told The Slovak Spectator, adding that these people praise organisations and movements linked with the Slovak state, such as the paramilitary Hlinka Guards or the then-ruling Hlinka Slovak National Party.

Those who praise the wartime Slovak state have spun a whole web of mythology around it, using twisted historical facts. The state’s president, Catholic priest Jozef Tiso, who was condemned and sentenced as a war criminal after the war, plays a central role in the myths and it is no coincidence that he appears on the banners that extremists carry during their marches.

Tiso is an icon for the rightist extremists who call him the only rightful president. He embodies their ideas about how an ideal society should look, Seman told The Slovak Spectator.

“His high moral profile is highlighted while his hostile attitudes towards the Jews are downplayed or their historical authenticity is denied,” Seman said.

For instance, the extremists stress the fact that Tiso did not sign the Jewish Code, but they do not say that under the then-valid legislation, the president was not required to sign the governmental directives.

The promotion of racism is a crime in Slovakia, but the marches celebrating the wartime Slovak state take place regularly and their organisers openly praise Tiso.

“This is just another symptom of the fact that there is no clear stance towards the Slovak state among Slovaks,” Seman said, explaining that the police work is influenced by the relativisation of that historical era. Instead of immediately intervening when the relics of the wartime state are promoted in public, the police prolongs the process by requesting expert opinions on obvious expressions, such as the sign of the Hlinka Guards or using the official salute of the Guards, he added.

“When the historian who provides the expert report is ambivalent in evaluating this historical era, his or her report can then significantly impact the criminal prosecution in such cases,” Seman said.

Mainstream politicians do not help

The Slovak political scene has seen even mainstream politicians express sympathy for the wartime Slovak state and there are several examples of those who refuse to condemn the state for its participation in the Holocaust and other war crimes, citing the economic prosperity of Slovaks.

“It is important for civil society in Slovakia that politicians and VIPs of the public life openly refute the legacy of the totalitarian Slovak state,” Seman said. “It is disturbing that currently we can see rather unwillingness among the politicians to speak about this era openly and with a clear value-based stance.”

Historian Ivan Kamenec from the Institute of History of the Slovak Academy of Sciences is sceptical towards politicians who talk about the wartime Slovak state: they do not know enough about it, and they tend to be quick to answer any questions related to this issue by saying they should be answered by historians.

“But historians have already had their say,” Kamenec told The Slovak Spectator. “This is how the politicians approach not only the wartime Slovak state but our history in general. They would prefer just picking the raisins from the cake, but they do not want to talk about the dark side of history.”

Kamenec criticised politicians who have no problems citing the fascist character of the Slovak state during a celebration of the Slovak National Uprising (a 1944 uprising of Slovaks against the regime), only to “praise the organisation that with its entire attitude stands for the rehabilitation of the wartime state and its personalities”.

There is a deep divide about how to approach the wartime Slovak state among historians too. There are historians who view it as the climax of the national-emancipation efforts of Slovaks, overlooking its totalitarian character, said Seman, adding that “it is sad that we find them in the Nation’s Memory Institute too”. Historians from another state-funded organisation, Matica Slovenská, have also spoken and written positively about the wartime Nazi-allied state in the past.