Surfing the web, free of charge

WHILE free WiFi has become a traditional service available in stations, city centres, cafés and restaurants, now it is also going mobile. 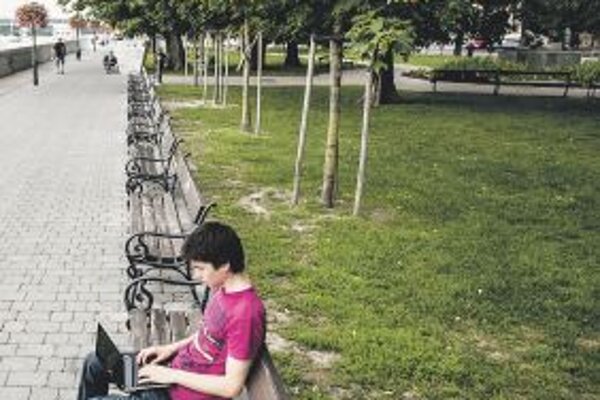 WHILE free WiFi has become a traditional service available in stations, city centres, cafés and restaurants, now it is also going mobile.

Already available on public buses in Bratislava and other cities, WiFi is increasingly making its way onto regional buses and trains. There are almost 5,000 WiFi networks in Bratislava to which anybody can connect.

Michal Horňák has compounded a map of the WiFi networks from information he found on the Czech website Wifileaks.cz. WiFi networks are most dense in the Bratislava city centre, the Sme daily noted in mid-March.

The Bratislava municipality provides free WiFi at the Primaciálne, Hlavné and Františkánske squares, Stanislav Ščepán, spokesman of the Bratislava municipal office, told The Slovak Spectator. While they do not monitor the visit rate on a daily basis, during the summer roughly 150 users use the free WiFi while in the winter it is less, about 20 people daily.

“Development plans of the city do not count on widening of WiFi network in the city centre, but it gradually should be installed in almost all public transportation means,” said Ščepán.

Bratislava was the first city in Slovakia to offer travellers on public transport (MHD) access to a free connection to the web via WiFi. Now Košice, Nitra, Prešov and Poprad do too. The service is provided by the company See&Go in cooperation with the mobile operator Orange Slovensko.

“Our company [first] operated in MHD vehicles a network of screens on which we transmit a programme, making travelling for people more pleasant,” Ivan Šimončič, executive director of See&Go, told The Slovak Spectator. Part of the programme also consisted of subtitled news, which they updated once per day via WiFi in the depot.

They later outfitted these screens with SIM cards and modems to make updates in real time. Now with an internet connection on the buses, it made sense to make it a WiFi hot spot too. At that time also 90 percent of respondents of a survey about the satisfaction with the screens in buses indicated that they would welcome free WiFi.

Encouraged by the results of the survey, the test service began and the tests showed that the data consumption was large, said Šimončič.

“This was at the beginning the biggest problem and many companies have not solved it until today,” said Šimončič, adding that they launched negotiations with all the operators and in the end they clinched an agreement with Orange Slovensko. “We are glad that they comprehended the strength of this project and helped this idea to materialise.”

The project is financed from renting marketing space on the website which appears as users connect to the WiFi.

The service was sufficiently popular to be added in Košice, Poprad and Nitra. They are currently launching the service in Prešov and Lučenec. The regional bus transporter Slovak Lines, operating in Bratislava Region, approached See&Go, too. Šimončič estimates that in early April there may be over 350 buses with free WiFi from See&Go. Banská Bystrica, Trenčín and Žilina are scheduled to do the same later this year.

See&Go uses the 3G network for its service while there is a quite complicated algorithm dividing connectivity. The network is open and they do not block usage of any services, explained Šimončič.

“Technically it was not easy to bring [the project] in this final solution because the environment in buses is quite different than a common environment for building a network,” said Šimončič.

The company has ambitious plans and wants to expand abroad. They have already begun negotiations in the Czech Republic, Austria and Serbia, according to Šimončič, while they would like to build a European network within a few years.

Free WiFi is already available in dozens of wagons of the state railway passenger company Železničná Spoločnosť (ZSSK). Earlier this year ZSSK announced its plan to continue fitting its wagons with free WiFi.

“We will invest annually €100,000,” said Pavol Gábor, ZSSK general director, as cited by the Hospodárske Noviny daily in early January. This would translate into installing WiFi on 35-40 wagons annually.

ZSSK introduced free WiFi in all InterCity trains on the routes between Košice and Bratislava in 2013, as well as in some express trains.