THE MORE than 11,000 filmgoers who saw Ladislav Kaboš’ documentary All My Children, which explores priest Marián Kuffa’s work in eastern-Slovak Roma settlements, made it the second most-watched film in Slovakia between February 13 and March 3. 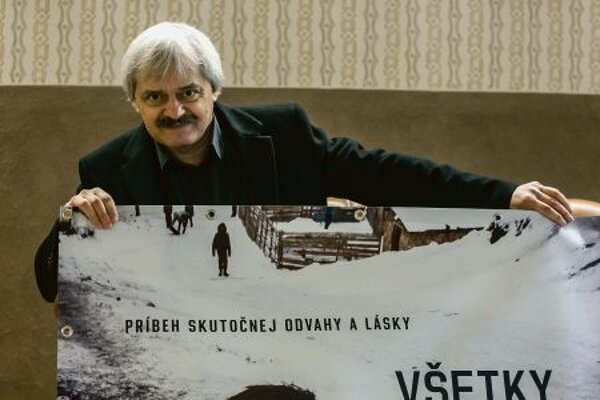 THE MORE than 11,000 filmgoers who saw Ladislav Kaboš’ documentary All My Children, which explores priest Marián Kuffa’s work in eastern-Slovak Roma settlements, made it the second most-watched film in Slovakia between February 13 and March 3.

By March 24, the film became the most successful Slovak documentary in the history of independent Slovakia, with more than 20,000 people having watched it, the SITA newswire wrote. It even beat popular documentaries like Dušan Hanák’s Papierové hlavy (Paper Heads), Juraj Lehotský’s Slepé lásky (Blind Lovers) and Marko Škop’s Osadné.

“We [the filmmakers] had nine out of 10 multiplex cinemas sold out,” Kaboš said at a discussion at the Medium Gallery on March 14. “And, moreover, this happened at the very evening when our ice hockey team played Russia at the Sochi Olympics, with 1,700 viewers watching it.”

However, Kaboš commented that his film was a test: a test of prejudices, friendships, the frankness of politicians and more. “One of my Czech friends, a cameraman, said he was not interested in ‘Gypsies’. It was also an argument against screening the film in big cinemas. In Prešov and Košice, I invited local politicians and learned, again, that the regional governor (in a region with thousands of Roma inhabitants) was not interested in Gypsies. Prešov’s mayor did not find the time, and Košice’s mayor at least sent his deputy,” Kaboš said, adding that neither the representatives of the public Radio and Television of Slovakia (RTVS), which co-produced the film, nor anyone from the Slovak or Czech Culture Ministry, attended the local premieres. Government Proxy for Roma Communities Peter Pollák failed to show up as well. “But the head of the Czech Television came to the premiere in Lucerna, and I am happy about that.”

“I was shooting footage, in the long term, about Marián and his ‘boys’, who he cares for at his place in Žakovce,” Kaboš said about the film’s origins. “But as he does not care about the colour of the skin of those who need his help, he started helping the marginalised Roma in the surrounding settlements more intensely. One day I went to visit him and was told that he was in one of the settlements, launching a ‘Roma mission’. I switched on the camera, and kept coming back for four years.”

The documentary, written by Kaboš and Svatava Maria Kabošová, with cameraman Michael Kaboš and music by Martin Dohnal, was completed in 2014, premiered in mid February (with English subtitles in Bratislava’s Lumiére Cinema) and is still being screened throughout Slovakia. Updated information can be found (in Slovak) at vsetkymojedeti.sk. The film exposes events and developments around Kuffa’s project in Roma settlements, from his early, tentative visits to intensifying cooperation, including negative incidents (which discouraged some people, especially non-Roma, from continuing to help), ailments and tragedies, until the results of Kuffa’s effort can be seen.

Following the old proverb, Kuffa decided that rather than give the Roma fish, he would teach them how to fish. He started by bringing old bricks and other materials to Roma communities so they could repair their run-down housing. He also invited professionals and some Roma enthusiasts to share their skills with the Roma. This project turned out to be something of a litmus test, showing who was truly willing to improve their lives and who was only pretending; who was willing to help others, and who succumbed to jealousy.

The film presents Kuffa’s slightly paternalistic approach (as evident from the film’s title), but it offers an intriguing view, with hardly anything comparable in Slovak cinematography. There have been excellent shorter documentaries, like Zvonky šťastia (Bells of Happiness) by Marek Šulík and Jana Bučka, and Cigáni idú do Volieb (Gypsies go to Elections) by Jaroslav Vojtek, as well as the feature film Cigán (The Gypsy) by Martin Šulík, but a documentary of this length, using material collected over four years, is unique.

In addition to being shown in multiplex cinemas and film clubs, All My Children was also shown as part of an exhibition at the Medium Gallery in Bratislava, called Časť bez Účasti (The Part Without Participation), between February 20 and March 16, curated by Barbara Gindlová, Silvia Čúzyová and Noro Lacko. The exhibition included photographs of marginalised Roma communities, as well as a presentation on social and cultural activism projects, screenings of Roma films and three discussions within the Word for Picture/Picture for Word cycle.

Picture for Word aims to become a long-term programme, offering discussions and lectures, and facilitating exchanges of ideas, dialogues and more. The title means that participants invited to lecture and discuss issues will get a photo or an artwork for their efforts and willingness to come. A discussion on March 14 (with a screening of Kaboš’ film) featured filmmakers Kaboš, Vojtek, film reviewer Zuzana Mojžišová, publicist and UN Development Programme analyst Daniel Škobla, among others. More such discussions are planned throughout 2014, according to the gallery’s press release.

“How the nation is, so are the Roma,” the discussion’s host Zuzana Gindl-Tatárová said, quoting a Roma friend of hers. This could be an apt description of All My Children, as well as other films and events which seek to focus the public’s attention on the lives of the Roma in Slovakia.