HEADS may roll in Prime Minister Robert Fico’s cabinet in the wake of his presidential election loss to philanthropist Andrej Kiska. While Culture Minister Marek Maďarič, who managed Fico’s failed campaign, admitted a cabinet shuffle is a possibility, he denied it was connected with the presidential vote. Fico has been silent since March 29, the day when he learned that the first non-politician to ever win the presidency, was backed by 1,307,065 people, some 200,000 more votes than Fico’s Smer harvested in the last parliamentary elections in 2012. Kiska took the race with a comfortable lead after picking up 59.4 percent of the vote, leaving 40.6 percent to Fico. 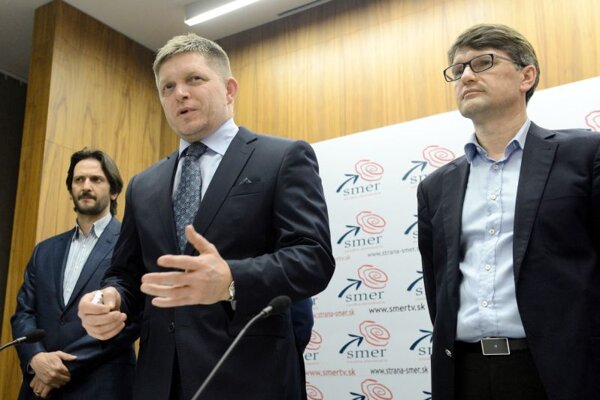 HEADS may roll in Prime Minister Robert Fico’s cabinet in the wake of his presidential election loss to philanthropist Andrej Kiska. While Culture Minister Marek Maďarič, who managed Fico’s failed campaign, admitted a cabinet shuffle is a possibility, he denied it was connected with the presidential vote. Fico has been silent since March 29, the day when he learned that the first non-politician to ever win the presidency, was backed by 1,307,065 people, some 200,000 more votes than Fico’s Smer harvested in the last parliamentary elections in 2012. Kiska took the race with a comfortable lead after picking up 59.4 percent of the vote, leaving 40.6 percent to Fico.

“Presidential elections do not give a reason for changes to the government, but the half-time of [Smer’s] rule could evoke such changes,” Maďarič said on April 2, as quoted by the SITA newswire.

Maďarič has several times said that Smer has no reason to draw larger conclusions from the election results and he took Fico’s defeat on his own shoulders. He however said on April 2 that this issue will be discussed at party meetings, but “not on the TV screens and newspapers”.

After the first round, Fico defined the presidential vote as a “referendum on Smer”. While the results show that Fico and Smer still have the support of almost 900,000 people, which according to Grigorij Mesežnikov, president of the Institute for Public Affairs (IVO), is not a negligible number, it is also “not enough for the government to consider itself to stand for the entire society”.

Martin Slosiarik from the Focus polling agency told The Slovak Spectator that the voters might have simply submitted the bill for the two years Smer has ruled the country alone and must bear full responsibility for all that has happened.

Pundits do not expect any dramatic changes within Smer. According to the Sme daily, people close to the party dismissed speculation that the government would resign. This speculation emerged in association with the debt brake law, which indeed comes into effect if Slovakia’s state debt exceeds 55 percent of GDP, which is likely to happen this year. Based on the law, once the cap is exceeded the government has to prepare a balanced budget – in this case – by 2016, the year of parliamentary elections. This would mean big cuts to public spending as voters were making up their mind who to support, and is not a good way to win an election.

Transport Minister Ján Počiatek said that speculations on the reconstruction of the government are just “unnecessary panicking”.

“What reconstruction; why should it be,” Počiatek asked journalists, as quoted by SITA.

Yet, Počiatek also added that no one’s ministerial seat is ever guaranteed and ministers should be prepared that their time might end from one day to the next. “I am prepared for that,” he said.

Economy Minister Tomáš Malatinský told SITA that he thinks his seat is rather secure. “I am not getting ready to go anywhere,” he said.

“What reconstruction? We are preparing to paint our house at home, it is true,” Health Minister Zuzana Zvolenská joked, as quoted by SITA.

Fico has said very little since his press conference on March 30, when he admitted defeat. He is now continuing to rehabilitate his injured Achilles tendon and he will be taking a break at least until April 6, according to press reports.

Smer members keep stressing that Fico still has garnered considerable support and within the party no one really questions his top position, but party leaders also remained tight-lipped about what comes next for the party.

Smer deputy Dušan Jarjabek told Sme, “I congratulate all the media that you have made it”, implying journalists are to blame for Fico’s defeat. He nevertheless added: “life goes on”. For another deputy, Anton Martvoň, Fico is the victor of the race, adding that he hopes that the race’s result will not be shown to be “the fraud of the century”.

Sources close to Smer confirmed that Fico was completely crushed on election night, and it was clear that he was experiencing a personal defeat.

Could have Fico done more?

“Fico managed to do everything he could have done,” Slosiarik told The Slovak Spectator.

For those voters who normally support Fico’s opponents, the centre-right parties, this was a referendum on Fico, Slosiarik said. Kiska was a more acceptable candidate for them, and by voting for him, they were in fact assessing the Fico government’s performance.

“This was an important message for the people with no party preferences,” Slosiarik told The Slovak Spectator, noting that these are the people who would hesitate over whom to pick in parliamentary elections, or wouldn’t even vote at all.

According to Slosiarik, another factor was that some voters simply did not understand why Fico was running for president and “why he wants to leave the executive branch, where he is able to influence developments in the country much better than from the position of president”.

There may be a group of Smer voters who could not interpret Fico’s ambitions and thus in the first round they voted for a different candidate, and cast their vote simply because they want to see Fico in the prime ministerial seat.

Marek Rybář, a political scientist with the School of Political Sciences at Comenius University, agrees that Fico erred when he very unclearly communicated the reasons why he wanted to be president, while also announcing his candidacy late.

“Both reasons are probably linked to the fact that he was certain that he will win the elections,” Rybář told The Slovak Spectator, adding that Fico had not assumed that someone without political experience and background would be his main opponent and that this will be Kiska’s main weapon as well.

However, Rybář added he is not certain whether an early announcement of Fico’s candidacy or clearer messages would have been enough for him to win.

To the question of whether a different Smer candidate could have performed better, Mesežnikov said that “the power logic of the Smer party suggests that actually no one else could have run [but Fico]”.

Slosiarik also finds it questionable whether a different candidate could have been more successful than Fico. He assumes surveys and alternatives within Smer led to the decision to field Fico as a candidate.

Kiska did not defeat Fico in some regions which traditionally support the ruling Smer party. Though the prime minister lost in many district towns, smaller towns and villages remained loyal, according to territorial maps published by Sme that combine the percentage support of presidential candidates and the vote count. The maps show which regions are crucial for parties’ or candidates’ support, and they also take into consideration the share of the regions’ results on the nation-wide outcome.

“The territorial core of Robert Fico’s election support in the second round of the presidential elections and the cores of support for Smer in the 2012 parliamentary elections are nearly the same,” election geographer Tibor Madleňák told Sme.

The traditional strongholds of Smer are Zemplín, Kysuce, central Považie and the upper Nitra regions. Also, some territories in districts of central Slovakia, like the northern parts of Lučenec, Rimavská Sobota, Revúca and Rožňava, as well as Detva and Poltár districts, usually vote for the ruling party, Madleňák added. Regarding the mobilisation between the first and second round, Fico managed to attract voters in a majority in these regions, he added.

“Those 40 percent of Fico is probably the whole reservoir that Smer can pick today,” Pavol Haulík of the MVK polling agency told The Slovak Spectator on March 30. “We will see what action he will take.”

Observers also say that the government’s unsuccessful fight against unemployment and the worsening business environment did not affect Fico’s vote count. Slovakia is divided based on other factors, like political traditions, Madleňák told Hospodárske Noviny. More factors include ethics, religion or territories with conservative and liberal voters.