Procházka says he is ready for a party

RADOSLAV Procházka is ready to found a new political party after all. How he came to this decision proves he is an unorthodox politician, despite the fact the he entered politics through the door of one of the most conservative parties on the Slovak political scene. 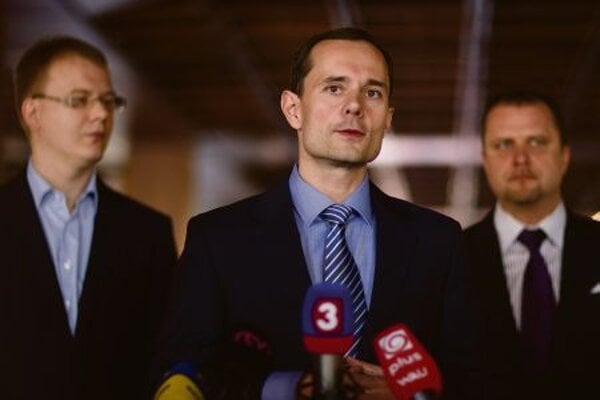 A newparty is emerging on the centre-right scene. (Source: SME)
Font size:A-|A+

RADOSLAV Procházka is ready to found a new political party after all. How he came to this decision proves he is an unorthodox politician, despite the fact the he entered politics through the door of one of the most conservative parties on the Slovak political scene.

“Procházka is another winner of the election after [president-elect Andrej] Kiska, because it came as a restart for his political career and a new focus on what he wants to do in the future,” sociologist Martin Slosiarik of the Focus polling agency told The Slovak Spectator.

Procházka did not make it into the run-off, but he garnered 20 percent of the vote in the presidential election, and immediately said he was going to use that potential. His post-election rhetoric contained words like ‘respect towards the voters’, ‘a humble approach’, and ‘a commitment to the citizens’, as he went on broadcasting his main campaign message: that politics should go back to being a form of public service rather than a path to power and money.

On March 27, Procházka announced that he has a network of people willing to join his new project, a political party to be founded soon. He has recently been negotiating with several mayors, and two MPs - independent Miroslav Beblavý (who has recently left the Slovak Democratic and Christian Union (SDKÚ)), and Andrej Hrnčiar, who is both a Most-Híd MP and a mayor of the town of Martin - concerning possible cooperation.

Hrnčiar confirmed he was leaving the Most-Híd caucus to team up with Procházka. He claims his relations within the caucus are fine, but that he believes that in the two years following the last parliamentary election, the centre-right opposition parties have failed to successfully re-establish themselves. Hrnčiar is not a member of the party, but he ran on its slate as an independent candidate.

“One cannot keep working as an independent,” Hrnčiar said, as quoted by the SITA newswire, adding that he considers joining a political party an important step.

Beblavý announced he was joining Procházka and Hrnčiar in founding the party on April 2, citing the need for a generational exchange and a new approach to politics as the main values he shares with them.

The MPs have not yet specified what the name, values, agenda, goals and structures, as well as financing, of the new party will be. Procházka, however, is planning for the new party to run candidates as early as this autumn’s municipal elections.

Analysts generally agree that Procházka does have something to offer to voters, and he might even be strong enough to restore some trust in politicians on the centre-right of the political spectrum, which suffered considerably after the centre-right government of Iveta Radičová was brought down in a no-confidence vote. They are, however, cautious on whether Procházka can rely on the 400,000 votes he garnered in the presidential election.

“I guess nobody counts on that, and if they do, they are being naive,” Slosiarik told The Slovak Spectator, explaining that there is a difference between voting for a person and voting for a party. In Procházka’s case, some of his voters in the presidential election are supporters of the Christian Democratic Movement (KDH), on whose slate he rode into parliament in 2012, which has “one of the most stable electorates”. While other parties, including Smer, are gradually losing voters, the KDH continue to have more or less 10 percent.

An asset or a problem?

Procházka’s project is meant as an attempt to bring a new face to politics, particularly on the right side of the political spectrum, but it is far from the first. His former KDH colleague Daniel Lipšic also quit the party to found his NOVA movement with similar ambitions, and even before that there was Freedom and Solidarity (SaS), a liberal project of Richard Sulík, now a small opposition parliamentary party.

These parties and the people within might be potential partners for Procházka in the future, but they are also his main competitors for voter support, analysts note. In reaction to Procházka’s decision, Sulík admitted that he did not expect Procházka to attempt to start yet another party, but to try and unite the divided conservative forces on the right.

“But if he manages to do that from this new position, it can be useful for creating a functional alternative to Smer,” Sulík opined, as quoted by SITA.

In the presidential elections Procházka attracted the support of SaS and NOVA voters as a young face, according to Slosiarik. It is hard to say whether these voters would support him in parliamentary elections too, however. If so, this could be a problem since these parties’ support lies on the edge of the parliamentary threshold.

Procházka could, however, count on support from protest voters who have rejected politics altogether after the Radičová coalition blew up in 2011.

“But Lipšic was expected to do something similar, and his project has so far not fulfilled these expectations,” Slosiarik said.

In an unusual move for the Slovak political scene, Procházka and Hrnčiar announced they are giving up their mandates after the May parliamentary session to found the new party outside parliament.

“They tried to talk me out of it, but in vain,” Procházka said, as quoted by the TASR newswire. “I prefer principle before comfort. I want to court the trust for entering the service via an election, in a green field. This is a big personal and political risk, but if we want to make things new, we have to do all of them and from the very beginning.”

Procházka, who kept his mandate after he quit the KDH, has stressed all along that he was going to abandon his MP seat in the event that he decides to start a new party. He explained he is staying until the May session when the new election laws are approved.

Asked why he did not give up his mandate a year ago when he left the KDH, he answered that it would have been irresponsible, as someone with a much lower position on the slate and fewer votes would have taken his place. Now, he added, founding a new party has given him a good reason for giving up his seat.

The KDH welcomed Procházka’s decision, with deputy chair Pavol Abrhan saying that the movement will now be stronger in parliament, as reported by SITA. Marian Radošovský should take up the vacant mandate after Procházka leaves. Hrnčiar’s seat should go to Edita Pfundtner, who, however, is no longer a member of Most-Híd.

Based on the principle of the free mandate, it is up to the MP to decide whether to stay in parliament or leave for any reason. This principle must be absolute, since it works as a sort of safety-lock to make sure the parties cannot play charades with their deputies in the parliament, noted Grigorij Mesežnikov, president of the non-governmental think tank Institute for Public Affairs.

“In Slovakia, the vast majority of new parties [including most Smer, Most-Híd and the SDKÚ] were founded in parliament or on the soil of older parties,” Mesežnikov told The Slovak Spectator, adding that nobody could blame Procházka for staying in parliament, also due to the fact that he got about 40,000 preferential votes on the party’s slate in the 2012 elections and thus significantly contributed to the party’s vote count.

The gesture is thus unorthodox, but not a populist one.

“I would even say that his political path will be much more complicated like this; he will have much fewer possibilities to deliver his [political] messages to the public,” Mesežnikov said.