SLOVAKIA still lacks enough qualified graduates to fully satisfy the need of foreign investors, who fault the still weak links between schools and businesses, as well as a dearth of young people studying technical fields, according to a survey of foreign chambers of commerce. 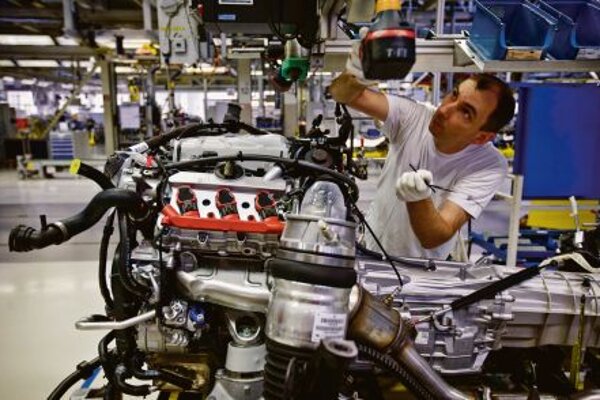 SLOVAKIA still lacks enough qualified graduates to fully satisfy the need of foreign investors, who fault the still weak links between schools and businesses, as well as a dearth of young people studying technical fields, according to a survey of foreign chambers of commerce.

The grades for vocational education system dropped the most of any factors evaluated by foreign investors, falling from last year’s 3.27 points to 3.48 points (on a scale where 1 stands for ‘very satisfied’ and 5 for ‘very dissatisfied’). Nonetheless, most say they would invest in Slovakia again, even under the current conditions.

“Foreign investors in Slovakia criticise the lacking combination of theory and practice in education, which makes it hard to find appropriately prepared job candidates on the labour market,” Markus Halt, spokesman for the German-Slovak Chamber of Commerce (SNOPK), one of the organisers of the survey, told The Slovak Spectator. He added that the industrial engineering field is particularly affected.

The state has already declared efforts to tune the education system to the needs of the labour market, with some of the measures being focused on supporting vocational training. The Education Ministry claims it is working on a brand new law on vocational education introducing elements of dual education into the existing system with an emphasis on adjusting the ratio of practical training to theory to 60:40.

Under such a model, the theoretical education should be guaranteed by the state while practical experience would be provided directly at the companies.

Meanwhile, companies with links to countries that have a strong tradition of so-called dual education (Germany, Austria and Switzerland) have already taken the initiative and came up with their own projects, like Fit4Future, which was initiated by SNOPK in cooperation with the Education Ministry.

The Swiss experience in dual education is shared within the Swiss-Slovak project Vocational Education and Preparation for the Labour Market, while Austria has provided a helping hand to Slovakia through a pilot dual education project.

Respondents described Slovakia as the best investment location in the CEE region this year, as it flip-flopped with the Czech Republic. It received a grade of 2.55. The Czech Republic got 2.56 points, followed by Poland with 2.67 and Estonia with 2.83 points. Up to 84 percent of those already established here said they would repeat their investment in Slovakia.

“The integration of Slovakia into the common market and the monetary union delivers a strong argument for the country being an attractive location for foreign investment,” Halt said, adding that investors also appreciate the motivated and qualified workforce at comparatively low costs.
On the other hand, they point to problems with corruption and the poor state of highway infrastructure in eastern Slovakia. The tax system, once considered a positive site-related factor, is also regarded as a negative aspect, Halt added.

“The latest tax reform, despite the reduction of the corporate tax rate to 22 percent, could not contribute to increasing investors’ satisfaction with the tax burden,” Halt said.

He explained that the introduction of the so-called tax licences and of the 35-percent tax at the source on payments from third countries, as well as the restriction of carry-forwarding “nullified the positive effects of the tax cut”. Moreover, labour taxes for employers remain high, Halt said.
Foreign investors also say that the latest amendment of the public procurement law that came into effect in 2013, despite the declared goals, did not contribute to higher transparency of public tenders.

“Regarding certain areas even the opposite is true,” Halt said.

Another serious problem underlined by investors is weak law enforcement.

“Companies need an efficient system of jurisdiction that allows them to enforce their claims within an appropriate period of time,” Halt said, explaining that the average duration of a court trial is between three and four years, which is “much too long for businesses”.

Moreover, it is necessary to strengthen judicial independence, he added.

Some 59 percent of surveyed investors say the current economic situation in Slovakia is satisfactory, while 29 percent of them view it negatively. Only 11 percent of firms considered the situation good, according to the survey.

The majority of surveyed investors do not believe that the Slovak economy will perform better this year than in 2013, Halt said. The survey showed that 57 surveyed companies assume the situation will not change.

“On one hand, domestic as well as foreign demand still is not strong enough to raise the national economy to a significantly higher level,” Halt explained. “On the other hand, Slovakia failed to improve its international competitiveness throughout last year.”

According to the Global Competitiveness Report issued in September 2013, Slovakia slipped for the seventh consecutive year. It placed 78th, a seven-point decline compared to the previous year, and Slovakia’s lowest position thus far. Slovakia is the second least competitive country in the European Union, with only Greece ending at a worse position, 91st, according to the study.

Companies are more optimistic about their own business performance than the economy at large. Some 46 percent of surveyed investors assume their situation will improve this year, while 44 percent say they will probably stagnate and 11 percent expect their situation to worsen. Moreover, 53 percent of respondents said they expect their revenues to increase in 2014. Most of the firms also plan to keep the same number of employees as in 2013, or even hire new staff. About every fourth investor claimed to be increasing investments this year.