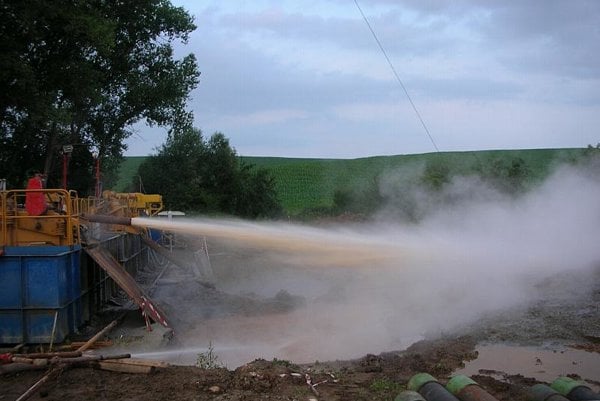 The region of central and south-eastern Europe, which includes Slovakia, is one of the most important geothermal regions in the world, the Slovak Renewable Energy Agency writes on its website. The estimated potential of Slovakia’s geothermal energy is 5,538 MWt. Geothermal energy is the second most prospective renewable energy source, with 17.5 percent in terms of the potential for its usage, following biomass with 46.7 percent, according to a cabinet-adopted document from 2003 on the usage of renewable energy resources.

One such plan is a project of the gas company SPP, which it has been carrying out in Svinica-Ďurkov in eastern Slovakia via its subsidiary company Geotherm Košice. SPP spokesperson Peter Bednár told The Slovak Spectator that SPP has so far completed all the necessary steps for preparing the investment from an engineering standpoint.

“However, two factors, the economic reasonability and the security of the investment, especially affect the pace of the progress of the project,” said Bednár, adding that SPP has already invested €16 million into the project. “Understandably, we are interested in the return on this investment. Our effort is to complete this project in a way that it is beneficial for all participating parties under any conditions.”

Geotherm Košice’s plan is to build a geothermal power station with an installed capacity of 3.5 MWe, while it is estimated that it will supply about 23,000 MWh into the national grid annually.

According to Bednár, the hydrodynamic and chemical parameters of geothermal drills and geothermal water have already been tested in Svinica-Ďurkov for the purpose of simulating real operation.

But Bednár points to barriers to effective usage geothermal energy sources for generating electricity in Slovakia. He reiterates that from the viewpoint of every standard investor, there are two questions of key importance for the development of a geothermal energy project: “satisfactory economic return and sufficient protection of the investment”. He added that in regards to Geotherm Košice’s project, the current guaranteed feed-in tariff of electricity generated from a geothermal source, which is at about €155 per MWh, does not guarantee a return on the investment.

SPP also views the current legislation as problematic, as geothermal resources were removed from legislation on mining and placed under the water law, which does not provide sufficient protection for the investor.

The Regulatory Office for Network Industries decreased this tariff from €200 per MWh as of 2014, the Trend weekly wrote. The Slovak government is also changing its policy of support for renewable energy sources while in the future it will instead support such projects via grants from EU funds and not subsidised feed-in tariffs.

“Construction of a geothermal power station is an immensely demanding project,” Martin Hujsa, the director of operations and planning at 4Energy Group, told Trend in November, adding that it requires a number of analyses to calculate the capacity of the source. “Unless you have enough quality data, such an investment may be very risky, not to mention the impossibility of financing it via a loan or insuring it.”

Another geothermal power station is planned for the village of Dargov in the Trebišov district. Geocom Invest plans to invest €40-€45 million into the construction of the geothermal power station with an installed capacity about 6 MW. It already received a positive environmental impact assessment, the Korzár daily wrote in mid January. Geocom Invest plans to start constructing the plant in the second half of 2014, with completion projected for the end of 2015.