THOUGH interest in gastronomy, especially in more distant, exotic cuisines, seems to be growing in Slovakia, some people may still be unfamiliar with what’s right “next door”. This may be the case with a culinary tradition that, while local, remains less known and appreciated than most others: Roma cuisine. 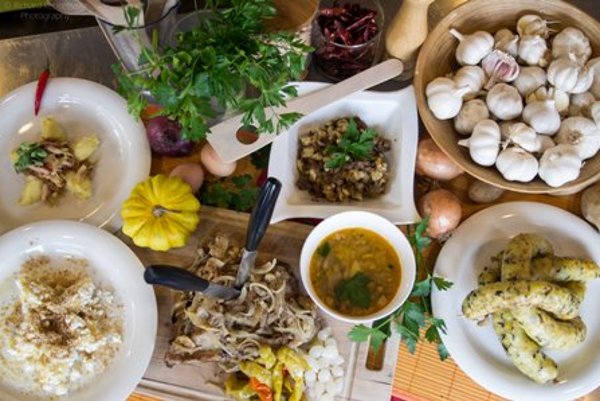 THOUGH interest in gastronomy, especially in more distant, exotic cuisines, seems to be growing in Slovakia, some people may still be unfamiliar with what’s right “next door”. This may be the case with a culinary tradition that, while local, remains less known and appreciated than most others: Roma cuisine.

The Gypsy Food Festival, taking place between April 7 and 13 in selected restaurants in Bratislava, is organised by the Divé Maky (Wild Poppies) civic association, which strives to end prejudice and create a supportive environment for the Roma, especially for talented young Roma who lack the finances for further study. In 2013, Divé Maky launched the first festival of Roma dishes, and encouraged by its success, decided to continue it this year.

“In the second week of April, restaurants like El Gaucho, St Marten, Pohoda Caffe, Funki Punki, Lemon Tree, Pod Kamenným Stromom, Prašná Bašta and others will offer recipes of traditional Roma cuisine on their menus, and in some of them, even a Roma band will play characteristic [Roma] mu- sic,” the civic association wrote, adding that the festival is also “a form of eliminating prejudices and returning to Bratislava its historical local colour”.

Apart from the food offered in restaurants, two professional chefs, Zdenka Mahajová and Zdeněk Michá-lek, will prepare Roma meals to be offered to the public in the Stará Tržnica (Old Market Hall) on the weekend of April 12-13, as part of the Fjúžn festival.

Mahajová and Michálek also helped to tear down barriers and prejudice in a non-traditional press conference on March 26 in the Chefparade restaurant, when journalists were invited to cook Roma meals themselves. With some initial hesitation, they soon became fully immersed in the process, and the result was a varied menu of hefty but very tasty and spicy meals, from soup to a Gypsy cake.

“My favourite cuisine is the old Czechoslovak one,” Michálek told The Slovak Spectator. “And Roma cui-sine captured me precisely thanks to its simplicity and originality, with its use of basic, local ingredients.”

“I got in contact with Di-vé Maky through my daughter, who worked for them,” Mahajová said. “They asked me, as a professional cook, to cook Roma delicacies for their event, Gypsy Bashavel.” Mahajová added that cooking is fundamental to Roma society: “Men hunted to bring food and women cooked and created a true home in the house.”

“The Roma might unwittingly try to suppress fears of hunger, which they have been experiencing plentifully in the past,” the Divé Maky press release reads. “Thus, every Roma mother tries to offer her family an excessive amount of food. Food is crucial for Roma, even more important than surrounding themselves with various goods.”

More detailed information on the festival can be found at gipsyfoodfestival.divemaky.sk.