Telling the truth on immigration 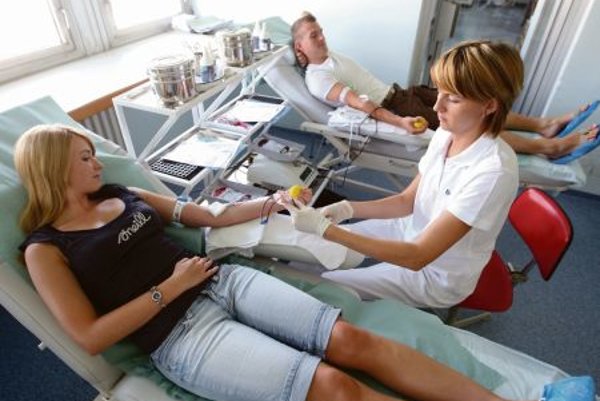 Would you take a transfusion from a foreigner? (Source: SME)
Font size:A-|A+0

WHEN Castor Enrique Sanchez Rodriguez, a 49 year-old English and Spanish teacher from Columbia, finally managed to buy an apartment in Bratislava, his neighbour approached him and his friend as walked around the building. The neighbour asked whether he was the new owner of the flat.

“When my friend told her I was [the owner], she seemed really pleased to hear that,” Rodriguez said, adding that she responded: “Thank God! You know, a rumour has been spreading that it was bought by a Colombian guy.”

Such attitudes are not uncommon in Slovakia and immigrants are frequently the target of rumour that they steal jobs or abuse the social welfare system. About half of Slovaks have a negative opinion about migrants and NGOs working with foreign émigrés warn that government policies might be driving such social exclusion.

The view that immigration is a problem is shared by 52 percent of Slovaks, with 71 percent of considering foreigners a burden on the state budget and social services. Around 68 percent of Slovaks have an opinion that migrants take jobs from natives, according to Transatlantic Trends study conducted by German Marshall Fund of the United States in 2013. Moreover, 63.6 percent agree that some foreigners spread dangerous diseases, according to Slovak Office of International Organization for Migration (IOM) study published in 2009.

Poor information about foreign migrants affects the Slovaks’ decisions whether they are willing to have foreigner as a neighbour or accept blood from an immigrant during transfusion, Zuzana Vatráľová, the head of the Slovak office of IOM told The Slovak Spectator.

Rodriguez said that he feels welcomed by most Slovaks, but notes he has also has been the target of prejudices.

“If your hair and skin are dark, for many Slovaks you are a thug or, at least, suspicious,” Rodriguez said. He noted that he has experienced “many petty situations on the bus or tram when they look at you and immediately move their purses away from you”.

Myths related to migrants vary. Those from Eastern Europe and the Balkans are often depicted as low wage labourers ready to steal the jobs of natives. However, Slovak legislation forbids employers from hiring foreigners if they are able to find proper employee among Slovak citizens. Moreover, many foreigners coming to Slovakia actually create a job positions for natives, Elena Gallová Kriglerová from the Centre for the Research of Ethnicity and Culture (CVEK) told The Slovak Spectator.

Another myth is that foreigners bringing their own culture with them threaten Slovak culture, tradition or religion, Kriglerová said.

The IOM study also showed that the public often imagine immigrants as refugees, despite the fact that the number of asylum requests has fallen continuously since 2004 when it reached 11,395 requests. In 2013 there were just 441 requests, according to the Interior Ministry. Slovakia has only ever approved 632 requests for asylum and granted Slovak citizenship to just 221 of those people since 1993.

Reality contradicts the image that waves of migrants flood the country since foreigners made up just 1.3 percent of people living in Slovakia in 2013, among the lowest rates per capita in the European Union. However, the fear of foreigners still prevails and this emotion produces other prejudices, according to Vatráľová.

“The sentiment of the majority of society is that it has to help them [refugees] therefore the arrival of foreigners to Slovakia means burden and expenses [for Slovaks],” Vatráľová said.

Considering the IOM survey’s data, Slovaks’ knowledge about foreigners is poor and they do not actively search for such information which results in stereotypes about other cultures, Vatráľová said. The fear of unknown also affects the Slovaks’ behaviour towards foreigners.

“For example, if natives fear that foreigners spread dangerous diseases they might refuse to accept blood from foreigner during transfusion,” she said.

On the other hand, just 6 percent of Slovaks have bad experience with foreigners contrary to 40 percent of those who have good experiences or 40 percent who do not have any experience at all. Stereotypes and a lack of knowledge about those people result in Slovaks’ reluctance towards foreigners in the country, Vatráľová said.

Some 44.6 percent of people questioned by IOM stated that Slovakia is country of Slovaks and it should remain to be such country. Moreover, 50.3 percent of respondents said that foreigners living in Slovakia should adjust to the Slovak way of living.

Since Slovaks lack information about foreigners and do not meet them regularly there are limits on how to fight against prejudices which are spreading among family members, schools and friends, Vatráľová said. She stressed that Slovaks’ opinion may become even more radical referring to the IOM survey which revealed that a majority support stronger anti-immigration policies.

Moreover, prejudices about criminality, illegal status, diseases, unemployment and other social problems linked to migrants polarise society. This leads to creation isolated communities and marginalisation of certain groups of people a well as increasing aggression towards minorities, Vatráľová said.

If Slovaks do not accept the migrants in their society they will become segregated and marginalised which leads to social tensions between them and the majority population, Kriglerová said. She draws parallels with such mistakes made in the past that has led to the isolation of the country’s Roma minority.

Even some people have few experiences with migrants they already have opinion that separation is the best option how to solve the problem. For example, a CVEK survey at schools asked teachers what they would do in case a large number of foreigners’ children started visiting their school.

“Almost everyone started to think about creation of separated classes or schools which indicates trends in people’s way of thinking,” Kriglerová said. “It is the reduction of shared space which is the worst path which we can take.”

To prevent spreading of such myths the media, teachers and public figures need more information about migrants. At the same time more facts about migrants should be published, according to Vatráľová. She noted that the IOM survey showed 80 percent of people think they need to know as much about foreign cultures.

Besides a lack of contact with foreigners, the government and media play the biggest role in spreading myths, Kriglerová said. Media should stop focus just on migrants’ criminality and bring stories revealing their way of life and common problems. The government should also ease repressive policies towards migrants which are mirrored in way how people see this minority, she added.

“This country will become more and more diverse and it is basically upon us how we will deal with it,” Kriglerová said.

Minority projects to get state funds

MINORITIES living in Slovakia will receive €3,603,404 for 1,241 projects in 2014. These projects include activities of theatres and folk groups, art, educational projects, leisure activities, publishing activities, support of print media and education about minority rights. The biggest slice of the pie went to the Hungarian minority.

The Government Office created a 15-person evaluation committee to decide over the distribution of funds, and the office, together with the Office of the Government Proxy for National Minorities, said that the first applicants will have money on their account in early April.

“The faster approach of the government in sending donations to applicants will increase the stability and the qualitative development of several organisations and events of ethnic minorities in our country,” Tatiana Kmecová from the Office of the Government Proxy for National Minorities told the SITA newswire.

Money sent by the government is necessary for promoting the culture and language of national minorities living in Slovakia and allowing applicants to run activities that help preserve and develop their culture, she said.