THE 10th anniversary of Slovakia’s NATO membership has come as the military alliance considers future strategy in the wake of Russia’s invasion of the Crimean peninsula. Now a stable member of this 28-member club, for Slovakia this was not always a given. 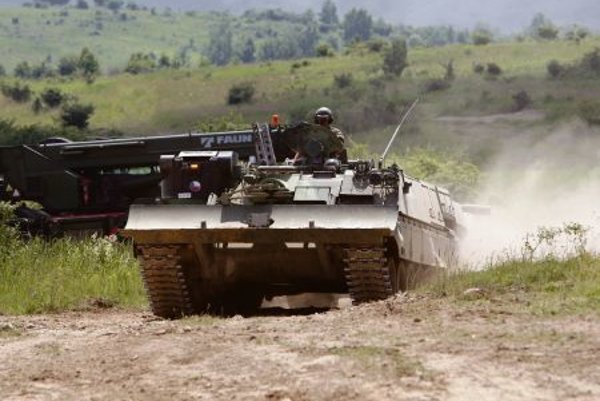 THE 10th anniversary of Slovakia’s NATO membership has come as the military alliance considers future strategy in the wake of Russia’s invasion of the Crimean peninsula. Now a stable member of this 28-member club, for Slovakia this was not always a given.

“This was a divided society,” said Milan Nič, executive director of the Central European Policy Institute in Bratislava. “It was a very hard discussion and the decision was made out of strategic reasoning.”

While collective security is the core of NATO, Slovakia joined in 2004, signalling the completion of a major set of domestic reforms. The event coincided with the country joining the European Union just a few weeks later. Still, the preceding years of political divide saw the centre-left parties, traditionally on friendlier terms with Russia, as more hesitant to join NATO, an alliance forged during the Cold War to combat the military threat the Soviet Union and its allies posed to western Europe.

Under the leadership of strongman Vladimír Mečiar, Slovakia failed to enter NATO during initial rounds of enlargement. Neighbours Poland, Hungary and the Czech Republic, for example, joined NATO in 1999. After being sidelined from that process, Mečiar had again raised the prospect of forming closer ties to Russia, but by the time of his 1998 electoral defeat Prime Minister Mikuláš Dzurinda’s right-leaning coalition government had firmly reoriented the country’s security policies westward.

A lengthy period of reforms followed, including professionalising the Slovak military, reforming the command structure, improved training regimens and integrating practices with those of NATO allies.
“Membership is more than what you see on the surface,” Nič said.

“When the dozen founding fathers of this Alliance signed the North Atlantic Treaty, their primary concern was security,” Igor Slobodník, Slovakia’s then-ambassador to NATO, said as the country joined in 2004. “That concern is still valid today, even though a lot has changed in [the] security environment since 1949, or even since 1989. The world is not as stable and predictable as we might wish it to be.”

Croatia and Albania joined in 2009, bringing membership to its current level, and NATO today – in particular as it has incorporated many countries that were once considered adversaries as part of the rival Warsaw Pact military alliance – looks like a very different organisation than it was in its founding. Members have deployed troops as part of various international missions. This notably includes Afghanistan, the first NATO mission outside its traditional “North Atlantic” roots. Since joining, Slovak troops have been deployed in Kosovo, Bosnia and Afghanistan as part of NATO missions. At present, 289 Slovaks are in Afghanistan after an additional 57 were sent in January, most in advisory or consulting roles. Slovak soldiers are slated to stay through the end of 2014 in Afghanistan, but this could be extended as NATO stills seeks to work out a future plan with the Afghan government. Three Slovaks were killed in Afghanistan last year, including two by a suicide bomber just after Christmas.

“It’s about our commitment to our membership in NATO,” Foreign Minister Miroslav Lajčák said in an interview earlier this year. “That is how we understand the alliance. It is giving and taking. This is a mission in a UN Security Council resolution-based mission.”

Conventional thinking in recent years had NATO becoming less and less oriented toward its one-time adversary in Moscow, but more recent months have rekindled talk of a hard security threat emanating from eastern Europe. Russia’s incursion into Ukraine has heightened sensitivities among NATO members, especially those in central and eastern Europe, some of which literally share a border with Russia.

“We have different geography, history and relations with Russia,” Tomáš Valášek, Slovakia’s ambassador to NATO, told the Sme daily in an April 4 interview. “The Slovak position is simple. We wish for the best possible relations with Russia. We do not want confrontation, but there are rules of the game that the Russians violated in Crimea. Slovakia is absolutely clear that security is key on its eastern wing.”

Looking ahead, balancing what appears to be a renewed threat from Russia and the global projects of recent years looks to be a key point of future NATO strategy. For its part, Slovakia still fails to meet the NATO-wide pledge to dedicate at least 2 percent of GDP to spending on defence, though the country is in the same boat as many European members. This year, the Slovak government will spend about 1.05 percent of GDP on defence and experts are wary of the quality of existing military hardware – much of which remains left over from the Cold War period and which is still reliant on spare parts imported from Russia. Efforts are underway to create a so-called Visegrad battle group that pools capabilities and resources among the V4 countries – Hungary, Poland, Slovakia and the Czech Republic.

“NATO membership guarantees Slovakia assistance by allies if Slovakia has to face extreme scenarios involving armed conflict, in which the country would never be able to defend itself,” Defence Minister Martin Glváč told the TASR newswire on the occasion of the 10th anniversary.

Looking back, and in light of more recent events, a few would say that joining NATO was a mistake.
“Since the decision to join was made, it has proved to be right,” Nič said.