THE ELECTRONIC toll collection system has undergone an extensive overhaul, with the network of tolled roads expanded and new tariffs that target the environmental friendliness of trucks. However, after truckers threatened to strike and complained that the burden which the new scheme puts on their shoulders is too heavy, the state lightened its grip on the reins, leading to complaints from municipalities about the disruption cargo transport causes to everyday lives. 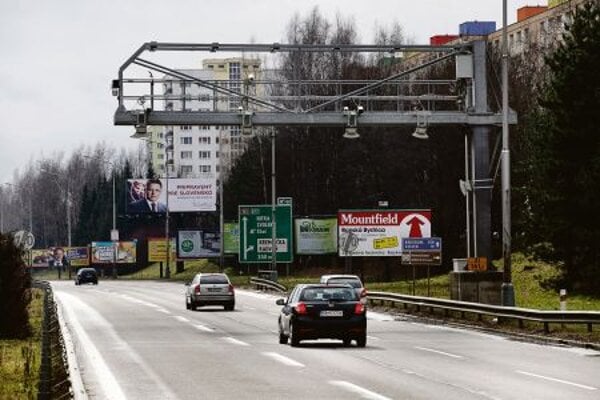 The toll system in Slovakia has been revamped. (Source: SITA)
Font size:A-|A+

THE ELECTRONIC toll collection system has undergone an extensive overhaul, with the network of tolled roads expanded and new tariffs that target the environmental friendliness of trucks. However, after truckers threatened to strike and complained that the burden which the new scheme puts on their shoulders is too heavy, the state lightened its grip on the reins, leading to complaints from municipalities about the disruption cargo transport causes to everyday lives.

“The aim of the ministry is to get the heavy cargo transport on roads which are intended and designed for them: highways, dual carriageways and first-class roads,” Martin Kóňa, spokesman for the Ministry of Transport, Postal Services and Regional Development, told The Slovak Spectator. “It is important to protect the quality of life of the rural population. On the other hand, we do not want to ruin the business environment for road carriers.”

The ministry negotiated for nearly all of 2013, with representatives of truckers as well as representatives of the self-administering regions. The result was a compromise agreement about changes in the toll system as of the beginning of 2014, according to Kóňa. These changes included the introduction of tolls for hauliers on roads in towns and villages, an extension of the network of first-class toll roads by roughly 230 kilometres and an extension of the ban for trucks on some second-category roads and all third-category roads except when servicing the territory. The monitoring of cargo traffic on second and third-category roads in the form of a zero toll was also introduced. This would give the state a better overview of the traffic intensity on these roads.
The new toll tariffs also reflected, to a more significant extent, a vehicle’s environmental friendliness, while the difference between the top and bottom category is in the tens of percents. This means that those carriers driving trucks with lower emissions should pay lower tolls. At the end of 2013, the number of vehicles in the top category, with the lowest emissions, made up 63 percent of all trucks registered in Slovakia. This share has been increasing while the share of trucks in the category of those most harmful to the environment decreased to a 10.9-percent share by the end of 2013, the TASR newswire reported.

The revamped system also introduced a bonus scheme motivating hauliers to drive on toll roads. Within it, trucks driving more than 5,000 kilometres on toll roads apply for a 3-percent discount. The maximum discount is 11 percent and it is for trucks up to 12 tons, which drive more than 50,000 kilometres.

Shortly after the change in tolls, the Slovak Union of Motor Carriers (UNAS) and the Association of Road Transport Operators of the Slovak Republic (ČESMAD) complained to the ministry that the impacts of the new tolls are higher than they originally expected. After another series of negotiations, the ministry reduced the toll in towns and villages to zero. Thus, trucks do not pay for transiting towns and villages, but the satellite-based toll collection system monitors them.

“After the changes were introduced, the association criticised the most the scope of tolled roads,” Pavol Reich, the general secretary of ČESMAD, told The Slovak Spectator, adding that the introduction of tolls on roads in towns and villages increased the length of toll roads by 985 kilometres, or 40 percent. “After the toll was lifted on roads in towns and villages, the increase is only 225 kilometres of the first-category roads, which we accept as this is especially the transit of foreign carriers.”
In general, ČESMAD accepts the setting of toll tariffs valid as of the beginning of 2014.
“Our goal was to put ecological vehicles at an advantage, and this has happened,” said Reich. “Simultaneously, a discount system was created based on the kilometres driven on tolled roads, which brings an advantage to Slovak carriers [when driving local roads].”

The Association of Towns and Villages of Slovakia (ZMOS), according to which the transit of heavy trucks via towns and villages threaten the lives, health and property of citizens and damages local roads, was not pleased with the result and is asking the ministry to curb the driving of heavy vehicles on these roads.

“ZMOS welcomed the legislative changes in the toll system valid as of January 1 of this year because they have a favourable impact on local communications and second and third-class roads,” Jozef Dvonč, ZMOS chairman, wrote in the association’s stance published on its website.

Stanislav Skala from UNAS argues that truck drivers do not want to drive on roads in towns and villages and that for them it is more convenient to use highways, dual carriageways and first-class roads, but that in certain cases they must use smaller roads, either because they have business in these municipalities or because there is no other road for them to reach the destination.

UNAS’s fundamental objection against raising tolls and extending tolls also on roads in towns and villages is that the collected money does not go into the construction or reconstruction of roads.
“We do not refuse to pay, but the problem is where this money goes,” Skala told The Slovak Spectator.

UNAS also criticises the increase of fines for violation of the e-toll scheme, when Skala pointed out that fines in Slovakia significantly exceed fines in other European countries.

In 2013, revenues from the electronic toll system exceeded €159 million, which meant an increase by 2.3 percent compared with the previous year. The National Highway Company (NDS) projected that new tariffs will fetch more than €183 million.

According to Ľubomír Palčák, head of the private Transport Research Institute (VÚD) in Žilina, after the changes, valid as of March 15, it would be difficult to keep this plan. He estimated that the reduction of the toll on almost 1,000 kilometres of roads in towns and villages to zero will cost the state about €41 million. Palčák disagrees with the concession of the state, proposing that the state should rather look for ways to improve conditions of road transporters via reducing the tax on motor vehicles, refunds of the diesel excise tax or bigger discounts in toll tariffs.

“There is not a very big space to burden Slovak transporters, but the most problematic issue is that actually foreign transporters would save €20 million, while they would transit our towns and villages and will not pay a single cent,” said Palčák, as cited by the SITA newswire. “I see no reason why foreign transporters should not pay for this.”

According to Palčák, payment of the toll by carriers when transiting towns and villages meets the basic philosophy of the toll – that trucks pay everywhere where people encounter transportation the most and where it affects the people’s lives the most. He points out that the intensity of the cargo transport on roads of towns and villages increased by 55 percent since 2005, according to the Pravda daily.

Negotiations continue.
“These days we are negotiating over reduction or setting of fines based on the seriousness of the violation,” said Reich, adding that it is important that these fines are not higher than the average in neighbouring countries. “Simultaneously we are solving questions of the possibility to charge on-board units [used for payment of e-toll] via the internet banking and messaging transporters via mail or text messages about the amount they have at their disposal on these units.”

Another issue which ČESMAD and UNAS want to address is the tax on motor vehicles.

They would like to see it reduced close to the EU average, pointing out that for the time being this tax in Slovakia is the second highest, after Ireland.

The Transport Ministry plans to hold another series of negotiations with cargo hauliers as well as representatives of municipalities in the middle of the year after the results from the traffic monitoring are known and search for solutions reflecting the current situation with a priority on guaranteeing that trucks will not damage rural roads and the quality of life of local citizens, but also make sure businesses are not overburdened by fees, Kóňa told The Slovak Spectator.