PASSENGER air transport is still trying to find its place even as Slovakia has witnessed the grounding of several operators in recent years. The challenge emanating from low-cost carriers, the concentration of demand for air transport in Bratislava and western Slovakia, offers from nearby foreign airports and the years of economic crisis mean that frequent change has been the reality.Most recently, the Danube Wings airline halted its passenger air transportation. After four years of operation it first closed down its Bratislava-Košice routes in late November 2013, before ceasing all other flights in December. 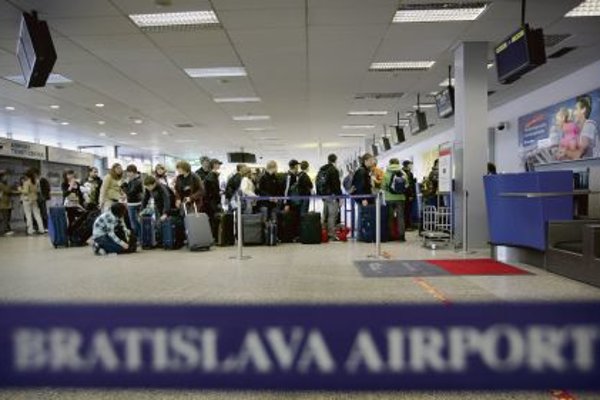 “During operation of this route we did not manage to find enough passengers prepared to pay real costs for its independent operation,” Ján Rostáš, then-director of Danube Wings, said in November, as cited by the SITA newswire.

Czech Airlines (ČSA) took over the Bratislava-Košice line and renewed, after a two-year break, the scheduled route between Bratislava and Prague in December.

Pavol Kajánek, the division director of the research and development department at the Transport Research Institute (VÚD), sees the size of the market and the lack of a connection with a large partner behind the failure of airlines in Slovakia. He explains that the inter-operation of the air carrier with other airlines, the best within established air alliances, is the fundamental prerequisite for an economically successful operation. The airlines must manage to cooperate within network air connections and “take over” transfer passengers to a connected flight and vice versa, he said. Only then is it “a classical operator”, he added.

“However, the Slovak market is small and our companies have not had a chance to succeed as a solo player on the European market,” Kajánek told The Slovak Spectator.

Antonín Kazda, head of the Air Transport Department at the University of Žilina, sees competition from nearby Vienna and low-cost carriers (LCC), insufficient financial coverage needed for the start of an air operator, financing of the first years of operation as well as problems caused by the economic crisis, behind the grounding of Danube Wings.

While thus far carriers have not succeeded in Slovakia, there has emerged a project of community flights. Poletme.sk is a private limited company which acts as an intermediary and aims to target and operate charter flights between eastern Slovakia and destinations with large communities of Slovaks and where there is no suitable connection available, Dušan Hatala, pilot and one of the founders of the community flying project Poletme.sk, told The Slovak Spectator.

The idea is that potential travellers book a flight via Poletme.sk and when the interest is big enough to cover costs, the flight will take place. With the number of passengers exceeding this basic limit, the price of the air ticket will decrease.

“Actually the current situation has inspired us – large communities of Slovaks from eastern Slovakia abroad without direct flights to the metropolis of eastern Slovakia, Košice,” Hatala told The Slovak Spectator.

Low-cost carriers operate routes from Budapest, Krakow, Rzeszow and Bratislava. There is only one scheduled direct line from Košice to London. It is operated by the Hungarian low-cost airline Wizz Air.

Traditional air companies operate on the principle of hub feeding, i.e. feeding of large airports, and this is why Košice has several daily flights to Prague and Vienna.

“Our goal is to offer an alternative: direct flights on a less scheduled basis according to real demand,” said Hatala. “For now, we have found out that in Slovakia there also exists a group of passengers who are willing to pay extra for the advantages of a direct flight.”

Kajánek sees community flights as an experiment, whose result is rather uncertain. In the end, passengers need a guarantee that they will fly, he said.

Hatala points out that while passengers see the difference between low-cost service and other services in the price, the low price of LCC is not free. LCC can fly only to airports where they have the potential to fully fill an aircraft and have the lowest possible airport fees – or perhaps even support from the region or the airport itself. They often choose airports sometimes even more than 100 kilometres from the stated destination. This leads to additional costs and time needed for ground transport, less than ideal departure times, no connecting flights and quality of travelling which includes smaller space, extra payments for baggage, refreshments, check-in and so on.

But Hatala points out that all this is a legitimate model of operation and there is huge interest in it.

“Nevertheless, the development in western Europe has shown that there exists a group of travellers who are willing to pay extra for services which they regard as important, and we do not speak about a meal on board,” said Hatala. “Thus, the real challenge is to discover this clientele again and offer it an alternative. This is, under the current conditions of air transport in Slovakia, where especially low-cost carriers have been the main players, a difficult task.”

According to Kazda, the share of low-cost carriers has been increasing globally while they enable a wide range of people to travel by air who could not afford to in the past. But on the other hand, LCC focuses only on “dense markets” and “point-to-point” transport.

“Point-to-point travelling is advantageous for those living close to the airport with a base of LCC and provides a lot of lines,” said Kazda, adding that, however, LCC in most cases does not enable, for example, interline, i.e. when changing flights passengers have to buy two individual air tickets and bear responsibility for missing the flight. “Also this is why LCC are not suitable for business travellers.”

With regards to passenger air transport in Slovakia, Kazda sees the lack of a long-term vision in respect to air operators as well as airports as the biggest problem. Another problem is that a significant part of Slovakia’s market is located in Bratislava and western Slovakia.

“Passengers from this location naturally use the wide offer of destinations and frequencies from Vienna,” said Kazda.

According to Kazda, no operator of scheduled air transport has a base in Bratislava and thus business travellers have no other option but to travel to Vienna or fly from other nearby airports, for example in Budapest or Krakow. ČSA, which provided collecting flights from regional airports, has its own restructuring problems.

Kajánek of VÚD looks at the challenges in passenger air transport from two viewpoints, the view of air carriers and the state.

“The challenge for air carriers is to create and operate air routes on Slovak airports in the long run,” said Kajánek, adding that this involves routes run year round and not seasonal holiday flights. “The challenge for the state is to create systematic, supportive and motivational conditions for air carriers in order to secure the transportation serviceability of the regions, especially in the direction of delivering lucrative travellers to Slovakia.”

With respect to the development of passenger air transport in Slovakia, including from those on small regional airports, Kajánek sees finances and guarantees as the key question.

“The fundamental problem is, who will pay it or who will take over the risk of loss during the beginning loss-making period until the air route is established,” said Kajánek. “This is the fundamental factor, which will decide about the opening of new routes.”

According to Kajánek, the markets of Slovakia’s regional airports are not so lucrative for foreign air operators to make them invest into a line until it becomes profitable, often a period lasting one or two years. Kajánek points out that the region as well as the state benefit from tourists arriving via this line already before the line becomes economically effective for the air operator.

“The provision of an investment stimulus for the initial loss-making period is rather a question of political decision, either on the regional or national level,” said Kajánek. “Slovakia’s regional administrations do not have an analogous tax and subsidy scheme, as is the case in other countries, to support a project of a new route.”

According to Kazda, it is worth thinking about support of regional air transport, especially at the beginning when a route is being launched. EU and national legislation enable this, he said.

“For example, holding a public procurement to secure air transport from a regional airport to one of the ‘hub’ airports would be a suitable form,” said Kazda. “But the condition should be securing of an interline agreement with an air operator from this hub. Such support from the viewpoint of the financial amount is negligible compared with other transporters, for example rails or buses, but it fundamentally contributes to the attractiveness of the region and business for investors.”

Kazda believes that it should be the task of the region to engage in the development of air transport, but he points out that the support and the scheme should be thoroughly prepared for it to be successful.