THE CURRENT exhibition in the Slovak National Gallery (SNG) explores the influences and forms of Impressionism in Slovak art rather than focusing on prominent global impressionists. However, some surprising parallels can be drawn. 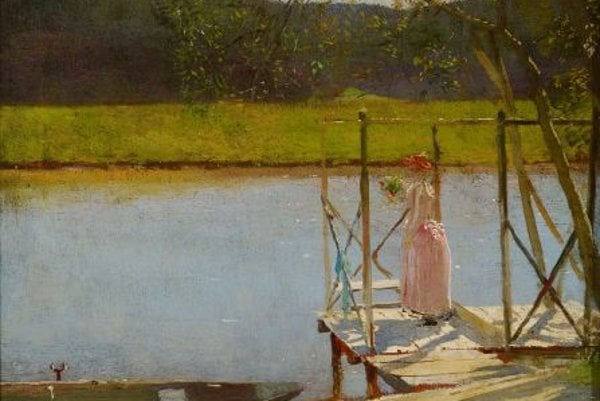 THE CURRENT exhibition in the Slovak National Gallery (SNG) explores the influences and forms of Impressionism in Slovak art rather than focusing on prominent global impressionists. However, some surprising parallels can be drawn.

“There has never been such a big exhibition of impressionism in Slovakia; and it will not be repeated in any other city,” curator Július Barczi told the TASR newswire. “The break of the centuries [the 19th and the 20th] was a period in which the fundamental of modern Slovak art were laid.”

“With this exhibition, we are filling in for the missing permanent exhibition (due to the ongoing reconstruction of SNG premises) from this era,” SNG’s general manager Alexandra Kusá said at the ex- hibition’s March 28 opening.

On a guided tour of Impre-ssionism on March 30, SNG’s lecturer Vladislav Malast explained the style’s roots, the breakaway from tradition and the previous focus on “clas-sical” art and “classical” education and academia, which could be seen not only in the thematic selection, but also in artists leaving official acade-mies in bigger numbers and gathering around new “residential schools” that reflected emerging trends. These ar-tists shifted their focus from the motif or the subject depicted to the painting itself, its colours, the perception of light and space, and perspective.

Malast also touched on the direct French impact on Slovak art of the period, citing Lázsló Paál as living in Barbizon, the pre-Impressionist art school near Paris, which moved from studios and museums into the open air, and which inspired later impressionists. Other prominent ar-tists working in Slovakia who were in contact with Barbizon were Ladislav Mednyánszky and Eugen Jettel.

This exhibition presents not only the established and widely-known names, like Dominik Skutecký, Ladislav Mednyánszky or Martin Benka, but also less famous artists, like Pál Sziney-Merse, Tivadar Zemplényi and one of the few early 20th-century female Slovak painters, Želmíra Duchajová-Švehlová. Other artists in the exhibition include Gustáv Mallý, Ferdinand (Nándor) Katona, Jozef Hanula and Maximilán Schurmann, among others. The paintings depict landscapes, still lifes and intimate portraits.

Malast admitted that he had feared before his first lecture on Impressionism that he would not find enough information to share with the visitors, but he cited curator Barczi as assuring him that “in the worst-case scenario, people will just watch and enjoy the beautiful paintings”. Indeed, Malast confessed that art historians and theoreticians are not supposed to have preferences, “or even to have taste, for that matter, but rather be detached”, but these paintings are truly decorative, full of emotion and expression of the beauty observed, and can capture visitors’ attention and appreciation.

ImpressionismSk has an accompanying leaflet in English, as well as a 170-page catalogue that contains a summary in English and costs €16.

Those who would like to have these artists and their works explained in the broader context of Slovak and European history and art, can take a guided tour in English, called Thursday Art Talk, on April 24 at 19:00 with lecturer Zuzana Koblišková. Otherwise, anyone can admire the exhibition at his or her own pace by visiting ImpressionismSK daily, except for Mondays, between 11:00 and 18:00 until May 25. More updated information can be found on sng.sk.

Four coronavirus outbreaks in Trenčín Region. Number of cases is on the rise

600 people are in quarantine.

Slovakia is ready to send help to Lebanon

No Slovak citizens among the August 4 blast confirmed so far.