SISTERS Valeria and Isabela Hadjiyska, along with Tsvetelina Gencheva, the director of the Bulgarian elementary and high school in Bratislava, who wore a black blouse richly decorated with Bulgarian folk motifs, were carefully placing hardboiled eggs into bowls with red, blue, yellow and green food colouring. In order to complement the Bulgarian embassy’s efforts to bring Bulgarian cuisine and culture to the Slovak audience, they decorated the eggs using different techniques passed down through families to the young to preserve the spirit of Easter. 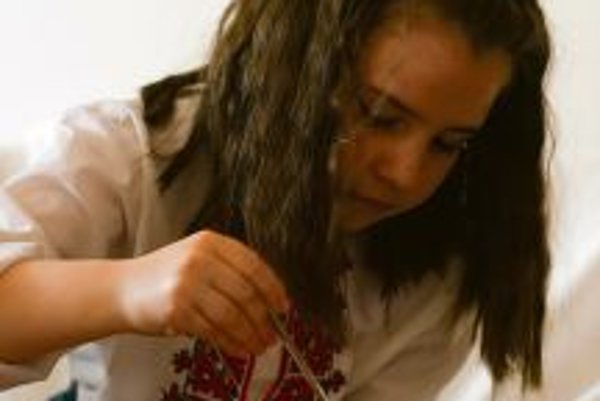 “We wanted to bring you traditional Bulgarian dishes that are typical for the Easter period,” said Margarita Ganeva, the Bulgarian Ambassador to Slovakia, when introducing the menu she created for the Cooking with Ambassadors programme, prepared by The Slovak Spectator and TV Sme, adding that these particular dishes are also made for traditional celebrations, such as Easter or May 6, St George’s Day.

The lamb, the iconic shopska salad and the kozunak cake, however, are not simply dishes, but have deep symbolism and tradition in Bulgarian cuisine. According to Ganeva, “the lamb is born in the spring”, and lamb dishes are linked to Easter and the sacrificial lamb. Yet, the lamb they prepared did not come from Bulgaria, one of the largest producers and exporters of lamb meat, but from Tvrdošín in northern Slovakia.

“The other thing is that we Bulgarians have a reputation for eating healthy, and practically all the recipes I want to introduce to Slovaks are healthy,” Ganeva said.

The shopska salad - a mixed salad with Balkan cheese - is undoubtedly healthy and one would think that it needs little introduction. Yet, Slovaks might be surprised to learn that many of the “shopska” salads they are served in local restaurants differ from the original recipe.

“We prepared the shopska salad especially for this programme because we wanted to offer the original recipe, which is not really used anywhere in Europe, because everyone mixes something of their own into it,” Ganeva said while placing authentic shopska ingredients into a glass bowl.

The Bulgarian ambassador explains that the salad, which consists of tomatoes, spring onions, cucumbers, roasted and peeled green or red peppers, parsley and salted Balkan cheese, is named after the Shopi people, who live in a region near Sofia.

“What is most important is not to put olives or lettuce into this salad because these ingredients do not belong there [in the traditional shopska salad],” Ganeva said.

Another well-known Bulgarian product is rose water, which has a deeply rooted tradition in Bulgaria and is produced from roses grown in central Bulgaria’s so-called rose valleys. The high-quality oil, originally used in the cosmetics industry, has, according to Ganeva, found its way into the food industry as well, in the form of rose jam or chips with rose oil.

“The best period for rose collection is May and the first weeks of June, when you pass through central Bulgaria in the rose valley around the towns of Karlovo or Sopot and people can inhale the rose[-scented] air,” Ganeva said, explaining that the oil is made from a specific type of rose, the damascena.

When asked to compare Slovak and Bulgarian cuisine, Ganeva said one shared feature is that both Slovakia and Bulgaria produce a lot of vegetables. However, Bulgarians consume more of them than Slovaks: “Regardless of whether it is dinner, lunch or breakfast, there is always some vegetable which belongs on the table.” The production of different kinds of cheeses is another shared tradition, according to the Bulgarian ambassador. Yet one difference, she notes, is that Bulgarians do not really fry their food, but prefer to bake, stew or steam it.

As for wine, the tradition goes back to the Thracians, however, modern Bulgarians still view wine not only as a drink but more as culture, Ganeva said, adding that Bulgaria’s sunny climate is conducive to red wine.

“There is a very nice song [in Bulgaria]: the nicest white wine is red,” Ganeva concluded. “This explains a lot: it is not the colour, but how one who tastes it feels and has a special relation to what he or she has on their table.”