FOR A whole week, several venues and streets in downtown Bratislava saw a higher than usual concentration of foreigners, but also Slovaks, many of whom attended a series of unique and sometimes exotic events. The Fjúžn festival, dubbed “the festival of new minorities”, took place in the Slovak capital between April 10 and 16, offering a host of events in its ninth year. 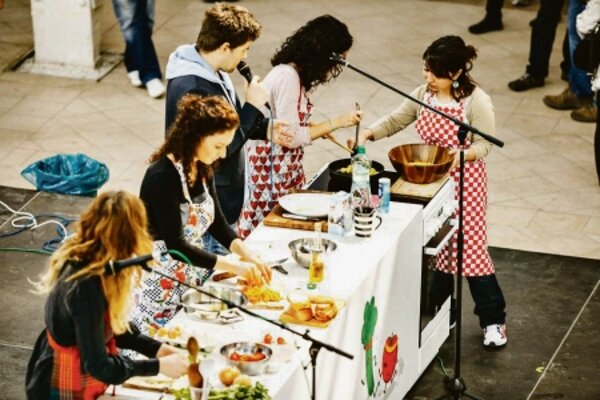 FOR A whole week, several venues and streets in downtown Bratislava saw a higher than usual concentration of foreigners, but also Slovaks, many of whom attended a series of unique and sometimes exotic events. The Fjúžn festival, dubbed “the festival of new minorities”, took place in the Slovak capital between April 10 and 16, offering a host of events in its ninth year.

In addition to the festival’s traditional, tried-and-true events, this year saw some new developments: a Multi-kulti (i.e. multicultural) guided tour of Bratislava emphasising the local mix of cultures and communities in the Middle Ages, and a Sunday Parade in the Old Market Hall, encouraging expats and communities living in Slovakia to come and prepare food, exercise, do body-painting with henna, watch dramas in English, admire photos or just sit and chat with a cup of uniquely flavoured coffee.

“The first Sunday Parade really was a paráda [parade]!” one of the organisers, Illah van Oijen, summed up afterwards. “Starting with the cooking school JemIné, which prepared traditional Spanish and Italian specialties onstage, the ‘Pošta zo Starej Tržnice’ workshop was a success, and attendees both young and old could try out circus tricks, and more than 60 people attended the theatre play in English, called Kukucheers. Personally, I was very happy to see a big group of refugees from the refugee camp in Rohovce, who were leading a drawing workshop and performed Iranian songs and African dances on the stage. Many people brought new and nice things to the Parada! recycling point, where volunteers raised, through selling these items, more than €200 to repair the roof of the Old Market Hall.”

One organiser from the Afghani community, Azim Farhadi, expressed satisfaction with the “paráda”, saying that although the idea is for the communities to rotate in participation, they would like to be present in the next parade on May 25, too.

“Home is where your heart is”

The concerts were among the festival’s biggest attractions, with performances by Ifi Ude (supported by Czech band Treehouse Conspiracy) on April 12, Dub Pistols (supported by local La3no Cubano and The Ugly Selectors) on April 15 and Sena Dagadu (supported by DJ Elo from her band Irie Maffia) on April 16. The series is called The Best of Visegrad, as Ude is of Polish/Nigerian origin, while Dagadu is half Hungarian and half Ghanaian, and the concerts thus featured performers from all Visegrad Four countries, i.e. Poland, Hungary, the Czech Republic and Slovakia.

“Your home is where your heart is,” Ude, born in Nigeria but raised and now living in Poland, told The Slovak Spectator. “I have my family in Poland, I have my friends there, I have the love of my life there; so I am more Polish than Nigerian.” Ude, whose concert might have been impacted by a nearly two-hour delay, played selections from her eponymous new album.

The concert took place in the KC Dunaj culture hub, which hosted a completely different event the next day: an evening dedicated to Ukraine featuring the Mak Trio from Lviv, the screening of two short documentaries, the Taras Shevchenko ensemble (composed of Ukrainians living in Slovakia) and two discussions, one with Slovaks with first-hand experience of developments in Slovakia’s violence-torn eastern neighbour, and one with Ukrainians living in Slovakia.

Both discussions were well-attended and offered an insider’s view of the difficult situation in Ukraine, which, as several speakers suggested, has “no intuitive, easy solution in sight”.

The festival, subtitled Susedstvá (Neighbourhoods), which ended just as The Slovak Spectator went to print, offered something for everyone, from concerts and discussions to events for children and puppet theatre for adults.

“The cooperation with the Fjúžn festival and the Milan Šimečka Foundation resulted in a great new tradition for Bratislava, and we are looking forward to the May 25 Parade, which will be dedicated to the return of the Dutch charity market, where the Dutch community will fundraise money for the repair of the roof of the Old Market Hall,” van Oijen summed up after the festival. “So next time: appeltaart and bicycles!”