THE BODY of Žofia Bosniaková, which had remained for 400 years in the chapel of the church in Teplička nad Váhom (close to the city of Žilina), was set on fire by a Žilina man, aged 31, five years ago, on April 1, 2009. 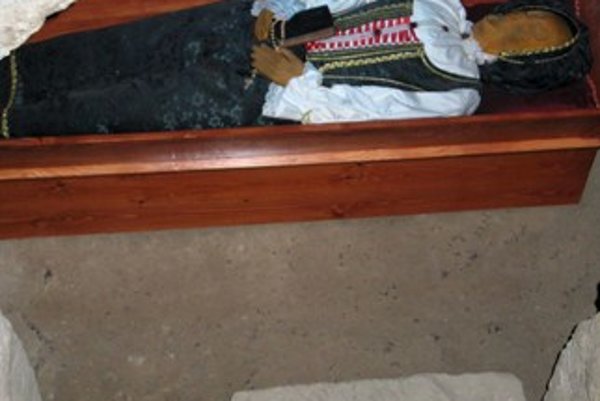 THE BODY of Žofia Bosniaková, which had remained for 400 years in the chapel of the church in Teplička nad Váhom (close to the city of Žilina), was set on fire by a Žilina man, aged 31, five years ago, on April 1, 2009.

Bosniaková’s intact, preserved body was found in the crypt of the Strečno castle’s chapel in 1689, and bishop Adam Ladislav Erdödy allowed for her remains to be displayed for the public in 1728.

Count Löwenburg, owner of the Strečno castle, set aside a dignified place for Bosniaková’s body: In 1728-1729, he had a separate chapel dedicated to the Loretta Virgin Mary added to the northern wall of the Teplička church. In 1729, Bosniaková’s remains were ceremonially moved from the crypt of the church to the chapel in a Baroque coffin with a glass cover, where her body remained until 2009.

Bosniaková was born on June 2, 1609 in Šurany, to the family of army captain Tomáš Bosniak. After a brief marriage, she widowed in 1626, and in 1629 she married Baron František Vesselény, with whom she moved to Strečno Castle and the Teplička mansion. She led a religious life, founding a hospital and a shelter for the poor. She died on April 28, 1644, at Strečno Castle, aged 34.

After being set on fire, her remains were returned to the chapel of the
Teplička nad Váhom church after a mass in April, 2009. Cardinal Ján Chryzostom Korec had assembled a committee back in 1997 to start collecting evidence for her beatification.

The Žilina man who set Bosniaková’s body on fire suffers from serious mental illness, the TASR newswire wrote. The court decided in May 2009 that he would be treated in a closed mental institution in Žilina, and his prosecution for the misdemeanour of damaging the corpse was halted.