SUPREME Court President Štefan Harabin already has at least one challenger as he seeks re-election to the country’s top judicial post, and his effort to hold onto the job has provoked 13 judges of the Supreme Court to publicly oppose his controversial candidacy. 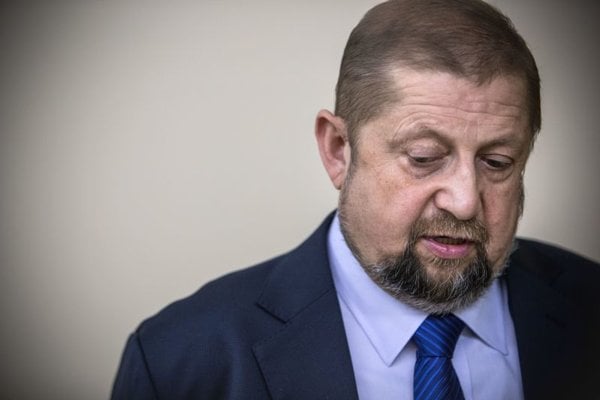 SUPREME Court President Štefan Harabin already has at least one challenger as he seeks re-election to the country’s top judicial post, and his effort to hold onto the job has provoked 13 judges of the Supreme Court to publicly oppose his controversial candidacy.

Harabin is pushing for his own return, even in spite of statements from Prime Minister Robert Fico that he would not recommend him to run. Harabin’s many critics are waiting for Justice Minister Tomáš Borec to table his own nomination, arguing that it would send a signal to the members of the Judicial Council about the next chief of the country’s top court, a post that doubles as chair of the Judicial Council.

The For an Open Judiciary (ZOJ) group officially confirmed its nomination of Zuzana Ďurišová in the race on April 24.

The Judicial Council, the top judicial body, which is chaired by Harabin himself, proposed him as a candidate for the race on April 15. Candidacies are being accepted until April 28. Just four days after the March 29 presidential election run-off that saw Fico lose to philanthropist Andrej Kiska, who said he would never appoint Harabin if he were elected, Harabin rushed to set the date for the elections for the Supreme Court’s top post for May 19, in apparent attempt to secure re-election before Kiska takes office.

Žitňanská and others have called on Borec to nominate an alternative candidate.

“I am finishing talks which should result in me being able to submit a dignified candidate,” Borec said, as quoted by the SITA newswire, though he declined to provide names.

Thirteen judges of the Supreme Court have protested the Judicial Council sending Harabin to the race, suggesting that it is an initiative of only a narrow group of judges tied to Harabin.

“We protest against such proposal of the judicial council because it does not represent the opinion of the judges of the Supreme Court,” reads a statement signed by Elena Berthotyová, Miroslav Gavalec, Juraj Kliment, Peter Szabo, Peter Paluda, Zuzana Ďurišová, Jana Henčeková, Peter Hatala, Milan Karabín, Daniela Švecová, Rudolf Čirč, Ivan Machyniak and Igor Belko.

The judges argue that the Judicial Council did not instruct the judges to submit nominations ahead of the special session that gave birth to Harabin’s candidacy.

Judge Mária Usačevová initiated that special session. As judges can submit candidates individually, Berthotyová has publicly criticised the move, arguing that Usačevová “did not have to hide behind the Judicial Council”, SITA reported.

The ZOJ said it believes that the members of the Judicial Council are aware of their share of responsibility for the bad condition of the judiciary and will elect a personality able to return respect and trust to this position.

“With her work, personal attitudes and private life she has proven that she is a personality with high professional and moral credibility,” ZOJ President Katarína Javorčíková said of Ďurišová’s nomination, as quoted by SITA.

Ďurišová never changed her attitudes, not even under harassment, Javorčíková said, adding that “she was able to criticise the current conditions within the judiciary openly and also in front of the public and the media”. As director of the Judicial Academy she demonstrated her ability to lead a team of people, Javorčíková added.

“The judges and the public rightfully expect that it will be a personality who will put an end to the period of confrontation and polarisation by Slovak judges and serious doubts about the impeccability and political independence of the current president of the Supreme Court,” Javorčíková added.

The Judicial Council elects the president at a public session. If the 18-member Judicial Council fails to elect the new president in May, the next round is held in 45 days, Sme noted, suggesting that this would reduce Harabin’s chances of being appointed.

Shortly after winning the presidential race, Kiska told the public service Slovak Radio that if Harabin were proposed to him he would use “all formal and informal steps to prevent him from being appointed”. During his presidential campaign, Fico said that he would not recommend Harabin, whose five-year term ends in June, to run for re-election, arguing that he “divides the judiciary”.

“Great, I agree with his opinion,” Interior Minister Robert Kaliňák said on April 16 in reference to Fico’s stance on Harabin’s candidacy, according to SITA.

Kaliňák however refused to comment on the Judicial Council sending Harabin to the race for re-election one day earlier, arguing that he cannot comment on the decisions of independent bodies. “If I made the nomination I would comment on that,” he said.

When pressed by the media for an opinion on Harabin’s candidacy, Borec avoided comment. He did not say whether he is working on one candidate or deciding on several names.

It was widely expected that Harabin would run for re-election, but for Žitňanská the challenger is more important, and she is still waiting to see Borec’s nomination, since “he could give a clear signal that Smer does not support Štefan Harabin”.

Žitňanská described her ideal canddiate as “a respected judge who is impartial and who views the independence of the judiciary as a value, while being free from political or other influences”.

When asked about Harabin’s chances for re-election, Žitňanská said it is difficult to assess. However, she suggested that a signal from Borec in the form of a viable candidate can transmit a signal to the members of the Judicial Council, “who, after all, were nominated by this government, parliament and president, because without these nominees Harabin cannot get re-elected”.

Meanwhile, Via Iuris, a legal ethics and civil rights watchdog, has launched an initiative called “For a Good Choice”, suggesting that “the chairman of the Supreme Court sets the tone for the whole judiciary” and thus the chair should be an “honourable and respected personality”.

Via Iuris in its initiative pointed to the extensive powers of the Supreme Court president, arguing that he or she can transfer Supreme Court judges, decide on their disciplinary proceeding or even propose halting their operation as judges.

The European network of judicial councils sets criteria that each judge should meet, Zuzana Čaputová, a lawyer cooperating with Via Iuris, said in a statement. It is natural that the chairperson of the Supreme Court meets these conditions as well, she said.

“Thus, it is crucial that someone with character and moral integrity becomes the [chairman of the Supreme Court],” Čaputová continued.

According to a survey conducted by the Focus polling agency for Via Iuris, Harabin contributes to the lack of credibility of the country’s judiciary, according to 58 percent of respondents, SITA reported.

The non-parliamentary party NOVA, led by Daniel Lipšic, a former justice and interior minister as well as a staunch critic of Harabin, has launched a petition against Harabin’s re-election, calling his nomination an “act of defamation against all judges”, SITA reported.

Amid protests by political ethics groups opposing Harabin’s desire to become Supreme Court president, the Judicial Council nearly unanimously elected him to that post in June 2009. Harabin was nominated as justice minister in 2006 by the Movement for a Democratic Slovakia (HZDS) and moved to the ministry from his position as a justice of the Supreme Court. For the period of his ministerial term his duties as a judge were suspended. When elected to the top judicial post, the former minister went straight on to serve as the head of the Judicial Council that oversees the operation of all courts in Slovakia.