RECENT developments in the Hedviga Malinová case have provoked strong reactions. Representatives of the Hungarian minority in Slovakia have planned a protest against the prosecution’s decision to press charges in the case. The Hungarian government has criticised the decision too, while president-elect Andrej Kiska stated that he would pardon Hedviga Žáková if she was found guilty. 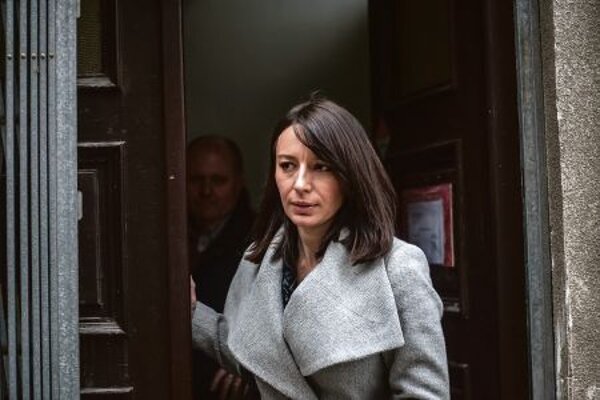 RECENT developments in the Hedviga Malinová case have provoked strong reactions. Representatives of the Hungarian minority in Slovakia have planned a protest against the prosecution’s decision to press charges in the case. The Hungarian government has criticised the decision too, while president-elect Andrej Kiska stated that he would pardon Hedviga Žáková if she was found guilty.

Žáková, an ethnic Hungarian who reported to have been attacked in August 2006 after two men overheard her speaking Hungarian on the phone, was charged with perjury in early April. She formerly went by the surname Malinová but has since married.

Following the decision to charge Žáková, the non-governmental organisation Round Table of Hungarians in Slovakia (OSMS) announced a protest gathering called ‘Today Hedviga, tomorrow you – Justice for all’ for April 30. The date was chosen to coincide with a gala event in the historical building of the Slovak National Theatre to mark the 10th anniversary of Slovakia’s EU membership.

“Our aim is to point out the disastrous state of the Slovak justice [system],” OSMS spokesman Géza Tokár said.

Several other NGOs are also involved in organising the protest event, including the Reformed Christian Church, Csemadok and the Association of Hungarian Parents in Slovakia.

“We’re remaining in the background,” said Szigeti, as quoted by the TASR newswire, stressing that the event is being organised by OSMS.

Foreign Minister Miroslav Lajčák, whose department also handles the minorities and human rights agenda, said it was regrettable that the Malinová case should be linked with the celebrations of EU membership.

“It is absurd to mix pears with apples,” Lajčák said, as quoted by TASR, adding that the two issues have nothing in common.

The Hungarian government called the decision to press charges against Žáková shocking in its official statement from April 9, and stated that she is now a Hungarian citizen under the consular protection of Hungary, “and Hungary will bring up her issue in international forums”.

President-elect Kiska, who is to be officially inaugurated on June 15, said in an interview with the Markíza TV channel on April 10 that he would definitely pardon Žáková if the court ruled against her.

“I consider the fact that for almost eight years we have hunted a person and we cannot bring it to an end to be a violation of human dignity,” Kiska said in the interview, adding that the case “should have been wrapped up long ago”.

Kiska’s declaration was followed by a wave of criticism.

General Prosecutor Jaromír Čižnár reacted on April 22 by describing any public statements on Žáková’s criminal case - whether by experts or lay persons - as regrettable attempts to influence the judge who is about to decide on the case.

Most-Híd chairman Bugár noted that same day that others have made statements about the Malinová case prematurely as well.

“The police had not even launched their prosecution yet and the prime minister and interior minister were already making statements and condemning her, [claiming] that she was lying,” Bugár said, as quoted by TASR.

Bugár was referring to the September 2006 press conference of then and current PM Robert Fico and Interior Minister Robert Kaliňák where they released the police findings and Kaliňák stated “it is beyond doubt that the case did not happen”. He presented several pieces of evidence that he said backed his claim, including DNA samples. Kaliňák later went on to denounce Žáková as a “pathological liar”.

It is not yet clear when the Nitra District Court will schedule the trial.

The accusation consists of 58 pages and the case file exceeds 5,000 pages. Altogether 69 witnesses were interrogated in the case, and four expert reports were submitted, according to Nitra Regional Court spokesperson Mário Pivarči, who said that the judge assigned to the case first needs to study the file, TASR reported on April 23.

“Studying the file requires a certain period of time to decide whether or not the judge accepts the accusation,” he told TASR.

It is unlikely that the court session will be set earlier than late May or early June 2014, TASR reported, citing unofficial information from the Nitra court.