NATO and its member states, including Slovakia, need to change their strategic thinking and military planning in the wake of the Ukraine crisis, says analyst Róbert Ondrejcsák, director of the non-governmental think tank Centre for European and North Atlantic Affairs (CENAA), who served as state secretary of the Defence Ministry during the Iveta Radičová government (2010-12). 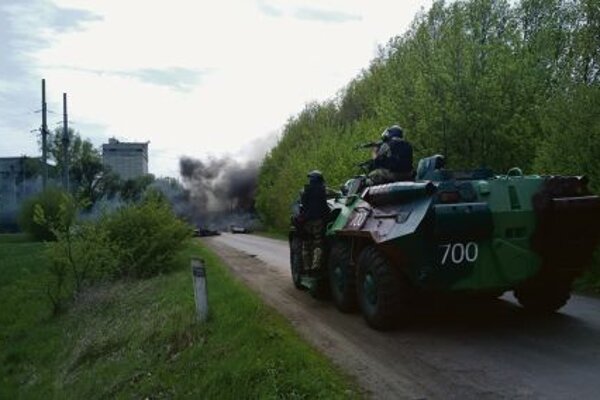 NATO and its member states, including Slovakia, need to change their strategic thinking and military planning in the wake of the Ukraine crisis, says analyst Róbert Ondrejcsák, director of the non-governmental think tank Centre for European and North Atlantic Affairs (CENAA), who served as state secretary of the Defence Ministry during the Iveta Radičová government (2010-12).

TSS: What are the possible scenarios for further development in Ukraine? Is it likely that some regions will break away from Ukraine as Crimea did and that the tension will move further west, closer to Slovakia’s border?
Róbert Ondrejcsák (RO): I think the tension will concentrate in the east and southeast of Ukraine, where a further fragmentation of regions might gradually occur. By attempting to destabilise eastern and southeastern Ukraine, Russia follows several aims: firstly, distract attention from the fact that Moscow has annexed Crimea, which is now little discussed since the media focus is on the east of Ukraine. Secondly, undermine the authority of the Ukrainian government in Kiev over the long run; in an extreme situation Russia might even abuse the eastern-Ukrainian situation to refuse to recognise the Ukrainian presidential election in late May. Thirdly, the destabilisation of Ukraine will complicate the orientation of Ukraine to the European Union, or its other integration efforts. It will be absolutely key for the Ukrainian government to start the political process in a way that is inclusive towards eastern and south-eastern Ukraine too, and thus prevent further destabilisation of the situation. Militarily, Russia will remain engaged in Crimea and in eastern Ukraine. I do not expect that in the current situation it will move further west. On the other hand, Moscow has crossed the imagined red line – not using military forces against Ukraine – which caused the psychological barrier to fall and that is why further escalation cannot be completely ruled out.

TSS: Is there a real threat that Russia would attempt to exercise its interests in the Baltic states in the way that it did in Ukraine? How should the EU and Slovakia react if that were to happen?
RO: Russia’s steps will depend to a large extent on the steps of the European states, the US, as well as NATO and the EU. If Moscow achieves its strategic aims in Ukraine without considerable resistance from the part of Europe and the US, it might gradually extend its actions towards Moldova and in the medium term also to the Baltic countries.

On the part of the EU and mainly NATO, it is now key to take concrete steps to demonstrate they are ready to protect their interests, including a more robust dissemination of military infrastructure on the territory of the central-European member states and the Baltic area.

TSS: Edward Lucas from The Economist wrote about how this conflict could grow into a third world war. Do you believe this conflict has the potential to gain global dimensions?
RO: I see little will on both parts for a real war between Russia on one side and the West on the other side. Russia could lose much more than it can gain with however extensive military confrontation with the West. Additionally, Russia is several times weaker than the NATO member states. The West should use this political, military and economic prevalence much more to restrain Russia and Russian ambitions.

TSS: What does the escalation of the conflict currently mean for Slovakia in terms of energy security?
RO: Even though Slovakia depends on stable supplies of energy resources from Russia to a large extent, and a potential vast conflict could threaten the supplies from Russia, in the real world this is a rather theoretical possibility. Firstly, Russia has an interest in stable supplies of its resources to Europe, since approximately two thirds of the Russian state budget’s income comes from the exports of energy raw materials, and Europe is by far the biggest importer. Supplies to Europe cannot be replaced by any other market, not even in the medium term, since the construction of an alternative infrastructure takes time. Moreover, following the experiences with the energy crisis in 2008-2009, Slovakia too is much more experienced and has taken measures at least for crisis diversification.

TSS: What other potential security risks does Slovakia face today in relation to the conflict in Ukraine?
RO: The security of all of central Europe has been based on three pillars since the end of the Cold War: the territorial integrity of Ukraine was maintained, our region was out of the strategic reach of the Russian armed forces, and war has not been used as a tool to solve inter-state problems. The Russian annexation of Crimea and the following Russian operations have undermined all three of these principles. This has brought about an unprecedented change to our strategic situation, towards the negative. We must change our strategic thinking and military planning at the state level as well as at the level of the alliance.

TSS: Based on the agreement on the immediate strengthening of technical and personnel presence in eastern Europe, is it possible that the presence of NATO armed forces in Slovakia will be increased? What will that mean for Slovakia?
RO: Slovakia as a NATO member state must be and has been ready to provide infrastructure for the potential arrival of alliance forces, as part of the Host Nation Support. The specific locations and bases have been determined in advance, as well as the way in which it would be carried out.