THE NUMBER of job offers by employers situated abroad has increased nearly five times since Slovakia joined the European Union. While in 2004 3,470 job offers came from abroad, that figure grew to 15,126 in 2013. Most offers come from neighbouring countries looking mainly for qualified technical workers, the latest data from Profesia.sk job portal showed. 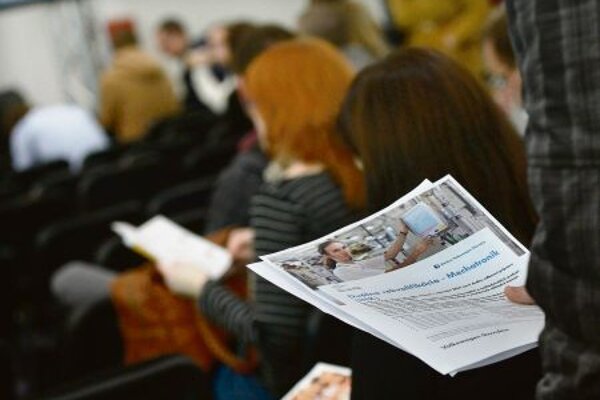 THE NUMBER of job offers by employers situated abroad has increased nearly five times since Slovakia joined the European Union. While in 2004 3,470 job offers came from abroad, that figure grew to 15,126 in 2013. Most offers come from neighbouring countries looking mainly for qualified technical workers, the latest data from Profesia.sk job portal showed.

“Regarding working positions, qualified technical workers, including computer experts and engineers, have the best chances,” the Profesia.sk report showed. Job offers for these employees stood at 54 percent in the first quarter of 2014.

Foreign employers also look for qualified workmen and employees in services (26 percent in the first quarter of 2014) and employees in non-technical fields, which includes, for example, health care (23 percent in the first quarter of 2014). Most of the jobs are offered in machinery, IT and management.
A similar trend was confirmed by European Employment Services (EURES), a joint network between the European Commission, national public employment services and other partner organisations. Most of the offers in its databases seek qualified workers, but also waiters, cooks, and employees in heavy industry, mining, agriculture and health care, Alena Házašová, a former coordinator for EURES, told The Slovak Spectator in January 2013.

Also, job seekers who use EURES services were interested in the hotel sector, gastronomy, industrial production, construction, transport and warehousing and health care.

Neighbours offer the most jobs

Since Slovakia joined the EU, most job offers have been published by its neighbouring countries. During the first quarter of 2014, Profesia.sk published 3,186 job offers from the Czech Republic, followed by Hungary (497), Germany (370) and Austria (244). Only 77 job offers came from Poland.

“The survey also showed that every 10th applicant is willing to work in the Czech Republic,” Profesia.sk reported, adding that people are most interested in ancillary works and manufacturing, where more than 100 people responded to one offer.

Employers in Hungary were mostly interested in finding mechanical engineers, quality engineers and sales representatives, while employers in Germany were looking for waiters, cooks and computer experts. Austrians offered jobs mostly for computer experts, IT consultants and software engineers in the first quarter of 2014, Glevická told The Slovak Spectator.

According to EURES databases, which contained some 200 job offers in mid April, most of the offers came from Germany (more than 50), Austria (around 40), the Netherlands (more than 30), the Czech Republic and Hungary (about 20 each).

The survey by Profesia.sk showed that though the number of offers from western European countries increased steeply when they opened their markets to Slovakia, this has gradually stabilised. In the first quarter of 2014 most of the job offers came from the Netherlands (100), Great Britain (97) and Switzerland (70).

Regarding the countries that Slovaks are most interested in, Házašová listed German-speaking and Scandinavian states, as well as the Czech Republic and Great Britain back in January 2013.