MARKUS Wuketich believes that there can be no real reconciliation without coming to terms with the painful chapters of one’s own past. The Austrian ambassador to Slovakia also notes that younger generations are not that familiar with the period when Europe was artificially divided by the Iron Curtain, adding that, nevertheless, preserving peace and stability requires continuous hard work.The Slovak Spectator spoke to Wuketich about Austria’s experience with dual vocational training and how it could inspire Slovakia to address its own education sector woes, as well as the challenges of the labour market, cooperation with the Visegrad Four group and the status of German in Slovakia. 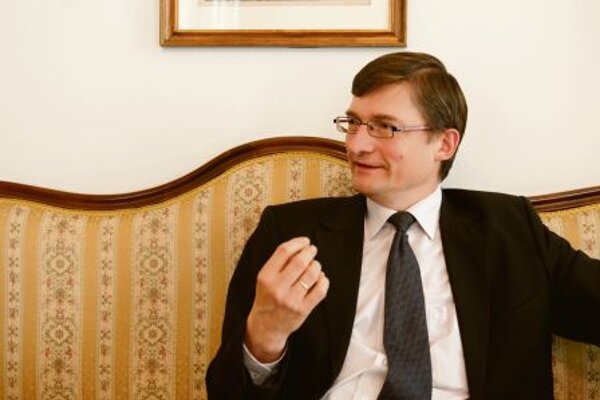 MARKUS Wuketich believes that there can be no real reconciliation without coming to terms with the painful chapters of one’s own past. The Austrian ambassador to Slovakia also notes that younger generations are not that familiar with the period when Europe was artificially divided by the Iron Curtain, adding that, nevertheless, preserving peace and stability requires continuous hard work.
The Slovak Spectator spoke to Wuketich about Austria’s experience with dual vocational training and how it could inspire Slovakia to address its own education sector woes, as well as the challenges of the labour market, cooperation with the Visegrad Four group and the status of German in Slovakia.

The Slovak Spectator (TSS): Austria is one of the countries helping Slovakia to re-introduce elements of dual education in the country’s education system. What makes the Austrian experience relevant for Slovakia? How is your homeland able to help Slovakia?
Markus Wuketich (MW): Austria has benefited a lot from dual vocational training. Young people get employed by companies as apprentices. They spend 80 percent of their working hours in their company and 20 percent in a vocational school. Thus, these young people get both practical and theoretical training. Around 40 percent of young Austrians opt for this kind of education when finishing the ninth grade. The success of dual education is based on cooperation between schools and companies. Participation of companies is crucial in this model.

The Slovak Education Ministry, the Austrian Economic Chamber, the Austrian Institute for Educational Research, the Commercial Section of the Austrian Embassy, together with five Austrian companies and one Slovak enterprise, have recently initiated a pilot project that should become operative in Nitra Region in September 2014. In one or two pilot classes dual vocational training will be offered in the spheres of metal technology and mechatronics. The idea is not to create a completely identical copy of the Austrian model. This pilot project should support and inspire the Slovak side in developing practice-oriented educational training, which is one of the Slovak government’s main objectives in this sphere.

TSS: Austria has one of the lowest levels of youth unemployment in the European Union; 9.40 percent in February. How has Austria managed to achieve such a level of employment among its youth?
MW: Youth unemployment is one of Europe’s major problems. Austria’s labour market policy is targeted towards avoiding youth unemployment by securing the qualification levels of young people and ensuring equal opportunities to the highest possible degree. The government has given an educational training guarantee. Whenever a young person does not get an apprenticeship at a company, he or she will receive dual vocational education in a state-financed institution. On top of that, the Austrian Labour Market Services offers coaching and courses for long-term unemployed young people in order to raise their qualifications. In general, the dual vocational training is very conducive to a speedy labour market integration of young people.

TSS: What challenges is the Austrian labour market currently facing?
MW: Although the unemployment rate in Austria is still remarkably low, it has been rising steadily in the past two years and reached the second highest level since 1945 in 2013. That is something we view with great concern. The tribulations of the world economy affect Austria as an open economy as well. Our main focus lies in slowing down the increase in unemployment.

TSS: Austrian university professor Stefan Karner has recently introduced in Bratislava his book Stop! Tragedies along the Iron Curtain. Why, in your opinion, is it important to return to this part of history? Is the younger generation in Austria familiar with the period of the Cold War and the existence of the Iron Curtain?
MW: This year we commemorate the 25th anniversary of the fall of the Iron Curtain. Twenty-five years is quite a long period. You are right when you say young people are not so familiar anymore with this period when Europe was artificially divided by the so-called Iron Curtain. European integration has brought us an unprecedented period of peace and stability in Europe. It is a human trait that we take good things for granted very often. But we cannot become self-complacent. Sometimes we have to work very hard to preserve peace, democracy, stability and prosperity. This is one of the messages of the Iron Curtain. Personally, I believe there is no real reconciliation without coming to terms with the painful chapters of one’s own past.

TSS: Three of Austria’s neighbours are members of the Visegrad Four. How does Austria view prospects of cooperation with the V4 group? In what areas would, in your opinion, more intense contact with the V4 benefit the region?
MW: Austria is a natural partner for the Visegrad Four and we are very open to cooperation with the group. We already participated in meetings in the V4 +- format on the western Balkans or eastern Neighbourhood. Closer contact in areas such as industrial policy, energy or cyber security could be very useful. The report ‘Central Europe fit for the future – Visegrad Group 10 years after EU accession’, that was prepared by a high level reflection group and released by the Central European Policy Institute here in Bratislava, advocates a stronger involvement of Austria in Visegrad Four cooperation.

TSS: Austria is the second largest foreign investor in Slovakia. Have all investment opportunities been fully tapped? Where do you see room for more Austrian investments or where are prospects for more intense cooperation?
MW: Austrian companies were among the first ones to invest in this part of Europe. Today Austria is not only the second-largest investor in Slovakia, but our two countries have also become eminent trading partners. According to an opinion poll conducted by bilateral Chambers of Commerce, 84 percent of Austrian companies would make their investment again in Slovakia. There is still room for closer cooperation in areas such as supply to the automotive industry, tourism infrastructure, renewable energy, energy efficiency or community infrastructure.

TSS: The regions of Burgenland and Trnava have started to cooperate in tourism through running information centres in Trnava and Parndorf. The project will also include training managers in tourism. What was the impetus behind the project and what should its contribution be?
MW: The Austrian Federal Province Burgenland and the Slovak Self-Administrative Region of Trnava signed a Memorandum of Understanding for Partnership in 2011 and have developed a fruitful cooperation. This joint Burgenland-Trnava Regional Information Centre you mentioned before was established within the framework of cross-border cooperation and co-financed by the EU.
The idea is that the two regions will gain more attractiveness when they present themselves jointly and use synergies.

TSS: The Education Ministry proposed that English language classes should no longer be compulsory for third grade primary school pupils, who instead should choose from six foreign languages, including German. How do you view the discussion on foreign language education in primary schools? What is the current position of German in Slovakia?
MW: German is the second most studied language after English in Slovakia. It opens study and job opportunities not only in neighbouring Austria but also in Germany, Switzerland and even in Luxembourg. Moreover, German has a strong tradition in this country. We will see what will become of this initiative to give primary school pupils the possibility to choose from several foreign languages. If it is going to be implemented, it certainly will boost demand for German teaching at schools. If the present regulations remain in place, it will be important to maintain the quality of German language teaching.