Slovakia marks 10 years in the EU

WITH Slovakia’s European Union membership reaching the 10-year mark, eurosceptical messages by some of the parties running in the upcoming European Parliament (EP) elections have been on the rise. Yet, analysts maintain that Slovakia’s EU accession is a crucial point in its post-1989 history: not only has it become part of the western world, but as an EU member, its global importance has risen. 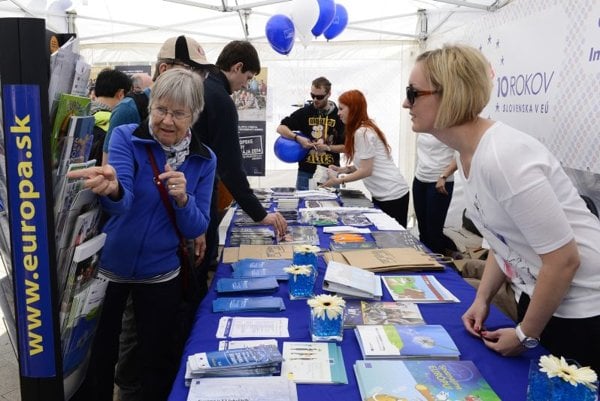 People can learn more about the EU in Bratislava. (Source: TASR)
Font size:A-|A+0

WITH Slovakia’s European Union membership reaching the 10-year mark, eurosceptical messages by some of the parties running in the upcoming European Parliament (EP) elections have been on the rise. Yet, analysts maintain that Slovakia’s EU accession is a crucial point in its post-1989 history: not only has it become part of the western world, but as an EU member, its global importance has risen.

Slovakia officially joined the EU as part of what came to be known as the “big bang enlargement” on May 1, 2004. Along with nine other countries, Slovaks joined the community that until then represented “the other side”. The 2004 enlargement was a big event not only for the new EU countries, but also for the EU itself, which swelled from 15 to 25 members in one go, and made its first leap into the Eastern Bloc.

“We live in the region of central Europe that has traditionally been a crossroads,” said Foreign Minister Miroslav Lajčák at a conference on the anniversary of the EU’s enlargement on April 25 in Vienna. “Everything that has happened in Europe was happening here too, and it was not always positive. So you cannot be left hanging ... you have to belong somewhere, and you want to belong to a good company, a good family, a good club. There is no better club than the EU.”

The last days of April saw the media discussing the ups and downs of EU membership, with some prominent European politicians visiting the Slovak capital, among them European Commission President José Manuel Barroso and European Parliament President Martin Schulz, who attended the gala event marking the anniversary on April 30.

“EU accession has changed Slovakia much more than it would appear at first sight,” said Dušan Chrenek, the head of the Representation of the EC in Slovakia. “The Union has become a part of our daily lives.”

The EU’s image has deteriorated over the years in the eyes of Slovaks. While in spring 2007 only 8 percent of Slovaks viewed it negatively and 58 percent saw it positively, in autumn 2013 as many as 28 percent perceived the EU negatively.

Slovakia has been among the most euro-optimistic member states and Slovaks have been known as supporters of deeper integration; polls however show a contrast between optimism and actual knowledge of the integration processes and the functioning of the EU. The Eurobarometer survey results have shown a decline in trust, especially between autumn 2010 and spring 2013.

While there is still room for criticism and improvement, from a geopolitical perspective the EU is “the most successful, progressive and rational model of cooperation of nation states that are clearly not able to react to the globalisation of the world on their own anymore”, according to Zuzana Gabrižová, the editor-in-chief of EurActiv.sk. The EU project has had a civilising effect towards the outside in promoting human rights, environmental protection and sustainable development.

Thanks to EU membership, Slovakia is anchored to a framework where all the values of western civilisation are institutionalised: human rights, the rule of law, democracy and social solidarity, Gabrižová noted.

EU membership has been key for Slovakia, as it created a solid framework for the development of its society, according to Grigorij Mesežnikov, president of the non-governmental Institute for Public Affairs (IVO). Membership put certain limits on the political players, which they had to respect, as any deviation would bring trouble.

“Being in the EU means building the EU in your country, building European standards - political, social, all kinds of rights,” Lajčák said at a conference organised by the Austrian Federal Ministry for Europe, Integration and Foreign Affairs, the Federation of Austrian Industries, the Institute for Human Sciences, the National Bank of Austria and the Vienna Institute for International Economic Studies.

“Looking back prior to 2004, it was the right decision to bring Slovakia closer to European integration, and this is clear from many indicators and figures. Simply put, Slovakia’s EU membership has been a success story for Slovakia so far,” said PM Robert Fico in an interview with the TASR newswire. Even 10 years on, however, a double standard and a division between new and old members persist and are felt even during talks involving EU bodies, according to Fico.

On the other hand, Gabrižová noted that Slovak governments have not been able to use all of the potential that comes with EU membership to the fullest extent, like the development potential of EU funds, improving public policies and public administration along a European pattern, and being more ambitious at the European level.

Before joining the EU, observers of the Slovak political scene hoped that membership would help the country cultivate its own political environment and bring some European culture into local politics. This however did not happen, Mesežnikov said.

“We still have here those politicians who entered the scene [before EU accession], with clear ideas,” Mesežnikov explained. “And obviously, it couldn’t be expected that they would change their mindset just because we’ve got clearer rules and norms now. But they had to adjust.”

In the core of integration

Government politicians have been stressing over the last 10 years Slovakia’s position at the core of European integration.

Gabrižová agrees that to a large extent Slovakia is perceived among EU members as one of the integration pioneers.

“With slight hesitations in the case of the first bilateral loan to Greece, Slovakia takes part in all integration shifts taking place in the EU - Schengen, the euro and the temporary and permanent loan mechanism,” Gabrižová told The Slovak Spectator, adding that under certain conditions Slovakia is willing to discuss further steps toward deepening the economic and monetary union.

Similarly, Slovakia has been rather welcoming in discussions of enlargement.

“Slovakia, within the EU and also on the outside, is a rather clear supporter of the process of approximation of the western Balkans into European standards, and it has turned it into an area of excellence [in terms] of its foreign policy and its European policy,” Gabrižová said.

“I believe the membership of my country and other countries has also been of benefit to the EU, because we have been contributing to discussions the EU has about other parts of the European continent that are not members of the EU, like the Balkans and eastern Europe,” Lajčák said. “We have our experience, our memories.”

At the same time, Lajčák stressed that EU enlargement should not be understood as charity or a humanitarian aid project. Rather, every new member should strengthen the EU, and every new accession must be a win-win project.

In the 10 years that Slovakia has been a member, the EU has grown to 28 members and has dealt with the biggest crisis it has had to face so far: the debt crisis, which not only hit several member states hard, but also redefined some of the principles on which the EU is based.

“Now, even though many are annoyed [when hearing it], the EU must define what it is and what it is not,” Gabrižová said, explaining that what mainly needs to be defined is the minimum standard of the members’ loyalty to the common future of the EU. In order to avoid any major clashes or break-ups in the future, the EU needs to define its economic and development policy in a way that would bring real convergence, at least in the eurozone. At the same time, it should not retreat from being a model that would secure social cohesion.

“In its external activities, the EU will have to make clear its stance towards Russia soon, without prejudice, but also without naivety,” Gabrižová said.