HUNDREDS of people gathered on April 30 to protest against the perjury charges filed against Hedviga Žáková. 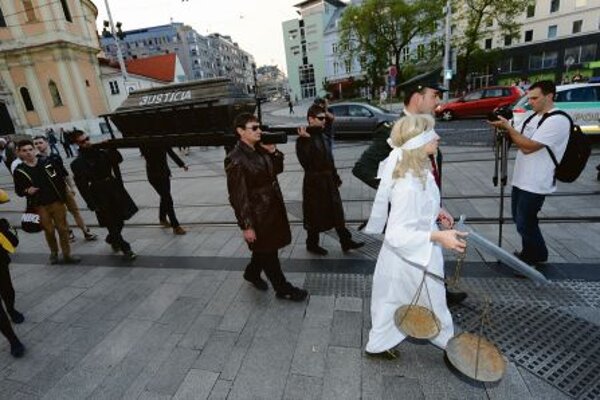 HUNDREDS of people gathered on April 30 to protest against the perjury charges filed against Hedviga Žáková.

Žáková (who formerly went by the surname Malinová, but has since married) is an ethnic Hungarian who reported to have been attacked in August 2006 in Nitra after two men overheard her speaking Hungarian on the phone. She was charged with perjury on April 2, years after the investigation began.

Following the decision to charge Žáková, the non-governmental organisation Round Table of Hungarians in Slovakia (OSMS) organised a protest called ‘Today Hedviga, tomorrow you – Justice for all’. Several other NGOs were also involved in organising the protest event, including the Reformed Christian Church, Csemadok and the Association of Hungarian Parents in Slovakia. Former archbishop of Trnava Róbert Bezák, journalist Eugen Korda and ombudswoman Jana Dubovcová expressed their support for Žáková.

“The state abandoned one specific person and ruined her life, while the same state claims that the law rules here and we are part of the European Union.” Zuzana Wienk, director of the Fair-Play Alliance, a political watchdog association, said during the protest, as quoted by the Sme daily. “This should not happen.”

Deputy General Prosecutor Peter Šufliarsky said in a discussion on the TA3 news channel on April 30 that the police stopped the investigation of the case in 2006 after a month and 23 days because the crime did not happen.

“It has been proven that the crime did not happen,” Šufliarsky stated, as quoted by TA3, while also admitting that there were some shortcomings in the initial investigation.

In May 2007, Žáková was accused of false testimony and perjury and in September 2007 the General Prosecutor’s Office intervened. Some seven years later, on April 2, she was charged with perjury, according to Šufliarsky. Moreover, he claimed that according to his information there is a witness who saw what happened.

The previous government of Iveta Radičováagreedto apologise toŽákovábefore the European Court of Justice (ECJ). The text of the settlement reads that the government does not explicitly admit that the state harmed Žáková during the criminal investigation, but it does state that certain circumstances about the case raise doubts in terms of respect for Žáková’s rights as guaranteed by the European Convention on Human Rights.

In return, Žáková promised she would not sue the country before the European Court of Human Rights (ECHR) in Strasbourg for what she has called errors made during the investigation that failed to guarantee her fair treatment, Sme reported in January 2012.

At the beginning of the event organisers gave protesters white t-shirts with the text ‘Hungarians go behind the Danube’, imitating the message written on the back of Žáková’s blouse during her alleged attack,Sme reported.

Several participants had signs with messages like “Justice for Hedviga” or “Hungarian students from Nitra did not forget you”, or with the Hungariannames of Slovak towns, such as Senec, Dunajská Streda,Šamorínor Galanta.

The Hungarian community in Slovakia owes it to Žáková because its support for her in the conflict with Slovak authorities was weak, according to OSMS spokespersonGéza Tokár.

“It is very important for us [OSMS] to take a stand in this case as well as in other scandals which shattered Slovak justice, and that our voice will be heard,” said Tokár, as quotedby Sme.

Žáková, now a mother of two, recently moved to the Hungarian town of Győr after requesting and receiving Hungarian citizenship at the end of 2013 under the provisions of the new Hungarian citizenship legislation. She sent a letter to protesters, however, writing that she hopes the authorities will realise their mistake, but that this has not yet happened.

“Eight years after the attack I will face the court as a Hungarian citizen,” Žáková wrote, as quoted by Sme. “I will need strength from knowing that I am not alone.”