THE MEMORANDUM of understanding that paves the way for Slovakia to send gas east into Ukraine is a contribution to Europe’s energy security, European Commission President José Manuel Barroso said after officials from Slovak gas pipeline operator Eustream and its Ukrainian counterpart Ukrtransgaz signed the document in Bratislava on April 28. 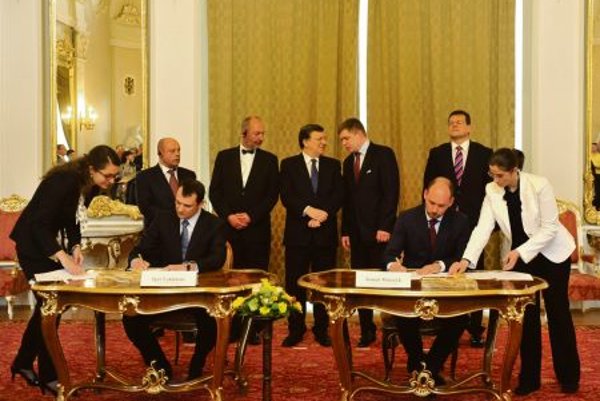 THE MEMORANDUM of understanding that paves the way for Slovakia to send gas east into Ukraine is a contribution to Europe’s energy security, European Commission President José Manuel Barroso said after officials from Slovak gas pipeline operator Eustream and its Ukrainian counterpart Ukrtransgaz signed the document in Bratislava on April 28.

“This is an important first step to diversify Ukraine’s sources of gas,” said Barroso, who personally attended the signing.

The agreement calls for the so-called small reverse version of transit that uses the existing, unused Vojany pipeline near Veľké Kapušany on the Slovak side. The pipe will be modernised and used to deliver the gas to Ukraine. The reverse gas supplies could start already this year, with the potential to deliver approximately eight to nine billion cubic metres of gas annually, although the initial flow is likely to be at a much lower rate. It will require a €20 million investment. The technical adjustments the solution requires will be carried out by Eustream.

According to the EC, last year Ukraine imported around two billion cubic metres of gas from EU member states.

If adding the reverse flow from Hungary and Poland, approximately 16-17 billion cubic metres of gas could be delivered to Ukraine in the future, said Fico.

Šefčovič said he sees the signing of the document as a result of intense communication between the European Commission and Slovakia as well as Ukraine.

“During long negotiations an optimal solution was sought, which shows that Slovakia is able to help its neighbours,” said Šefčovič, as quoted by TASR. “Yet it is able to do it in a way that it respects international law and contractual obligations. At the same time it is able to do it when it is needed the most.”

The possibility of a reverse gas flow from Slovakia to Ukraine has been discussed for more than a year. The negotiations became more intensive over the past few weeks after Russia increased the price of natural gas for Ukraine. Slovakia has been advocating the option of using a 700-milimetre-diameter pipeline, built to supply the Vojany power plant with gas from Ukraine, to secure the reverse flow so as not to violate existing contracts. Ukrainian officials instead hoped to utilise the spare capacity of four other existing pipes operated by Slovak pipeline operator Eustream going through Veľké Kapušany.

As far as finances are concerned, “it is a standard operation of gas supply to the territory of a different state with payments and with everything it involves”, said Fico.

According to the EC release, the successful implementation of gas flows from the EU to Ukraine is a win-win situation for both parties. It allows Ukraine to access various gas sources – among them Norwegian gas or liquefied natural gas (LNG) from the global markets – at competitive prices.

Some of the gas is still likely to be Russian, coming via the Nord Stream pipeline that leads into northern Germany before being pumped south. That gas, though, would still likely come at a cheaper rate for Ukraine, which has seen Gazprom nearly double the price it is charging for direct gas sales in recent months.

“It is important in this respect that Ukraine, particularly as a member of the Energy Community, makes swift progress in aligning its legal and regulatory framework with the EU energy legislation,” said European Commissioner for Energy Günther Oettinger, according to the EC release. “This will increase investors’ confidence and help the country to modernise its energy sector.”

The issue of financing the project of the reverse gas flow to Ukraine through Slovakia’s territory by the EU is unresolved for now, the European Commission said.

The EU will be able to make this decision only after wrapping up the process of assessing the interest of the market in new capacities, the so-called open season and after clarifying the economic viability of the project, reads a statement provided by head of the press department of the EC representation in Bratislava Andrej Králik to TASR.

A couple days before actually signing the document, Fico said that if the document is signed, Slovakia will have done everything to help Kiev, but will have also defended its own economic and national-state interests while appearing as a trustworthy and serious partner, TASR reported. Fico also said he was not completely satisfied with the format of the talks since, as he said, he had proposed quadrilateral discussions at the level of Slovakia, Russia, Ukraine and the EC.

“Someone was interested in having such a meeting at any price, and it even worked out, and thus these took place only at the level of Slovakia, the EC and Ukraine,” Fico said, as quoted by TASR, adding that he will be satisfied with the small reverse flow, but “the result of such a meeting cannot be a large reverse [flow], because that cannot be achieved without the participation of the Russian party”.

According to Fico, Ukraine has been pushing Slovakia toward a large reverse flow, “but we refuse that; we will protect our own interests” said Fico, adding that he, for example, does not sense any similar pressures from the American partners.

The United States government has been active in the talks, with US Vice President Joe Biden speaking on the phone with Fico several times, most recently on April 17. Biden thanked Fico for Slovakia’s commitment to bolstering energy security within Europe, including supporting the reverse flow of natural gas to Ukraine, according to a White House statement.

“Biden sent a signal that they also consider the reverse gas flow an extremely important matter in Washington,” Alexander Duleba from the Slovak Foreign Policy Association told the Sme daily in April.