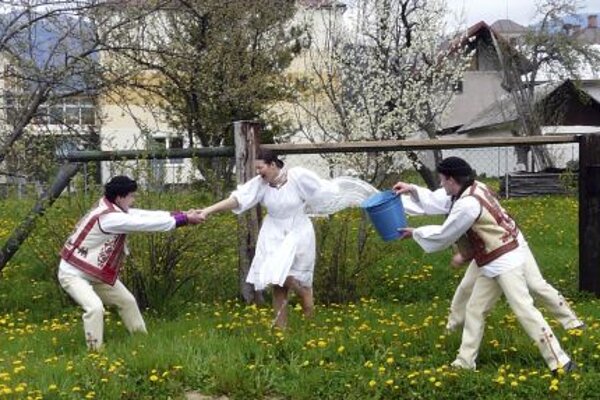 Allianz-Slovenská Poisťovňa reported a case where, in keeping with Slovak tradition, an elderly man decided his small granddaughter would benefit from a thorough act of “šibačka”, the traditional Easter whipping of females with wicker sticks decorated with ribbons. The girl resisted, however, and when securing her over his knee, he suffered a herniated disc, causing such intense pain that he had to be carried away from his eighth floor flat on a stretcher by paramedics, the TASR newswire wrote.

Elsewhere, when four slightly inebriated young men in a car spotted the driver’s girlfriend outside an apartment building, they decided to surprise her with an Easter whipping and dousing. When they leapt out of the car, however, the driver neglected to secure the handbrake, and the vehicle rolled into and smashed a ‘yield’ sign.

Another man’s seemingly innovative idea for transporting large amounts of water for an Easter dousing went awry when he hung two buckets of water on his bicycle handlebars. While attempting to navigate the bicycle through a narrow gate held open by his wife, the man lost his balance and collided with the woman, who suffered a fractured wrist and a generous if unwelcome Easter dousing.