IN MAY 1919, shortly after the First World War, when the Czechoslovak Republic was a new arrival on the world map, a hero was on his way from Italy to reunite with his friends back home in Bratislava, who were pinning their hopes on his diplomatic and political experience. But those hopes were extinguished when the hero’s aeroplane crashed at the location close to the Bratislava airport that bears his name today. 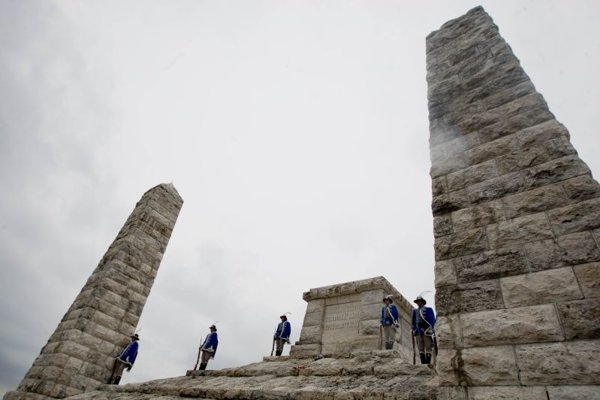 IN MAY 1919, shortly after the First World War, when the Czechoslovak Republic was a new arrival on the world map, a hero was on his way from Italy to reunite with his friends back home in Bratislava, who were pinning their hopes on his diplomatic and political experience. But those hopes were extinguished when the hero’s aeroplane crashed at the location close to the Bratislava airport that bears his name today.

This month Slovakia marks 95 years since the tragic death of General Milan Rastislav Štefánik, one of the founding fathers of the first Czechoslovak Republic, as well as a military leader, pilot, astronomer, traveller, photographer, diplomat and politician – in other words, a real Renaissance man among the historical personalities who shaped the nation’s history. A memorial event was held at Milan Rastislav Štefánik Airport in Bratislava on May 5, 2014.

Štefánik, who was born in 1880 in the village of Košariská in western Slovakia, became a French citizen in 1912. During the First World War he served as a pilot in the French army. At that time his involvement with the Czechoslovak movement began and he immersed himself in the political and diplomatic struggle to establish an independent state of Czechs and Slovaks. Together with Tomáš Garrigue Masaryk and Edvard Beneš he founded the first Czechoslovak National Council.

Because of his diplomatic experience and connections, Štefánik’s main task was to persuade both Czechs and Slovaks to start fighting with the Allies. He assembled the Czechoslovak legions, consisting of Czechoslovak soldiers abroad, whose activities led to Czechoslovakia being considered a victor when the war ended with the ruin of the Austro-Hungarian Empire.

The emancipation efforts of both Czechs and Slovaks culminated in the founding of the first Czechoslovak Republic (ČSR). Despite divided opinions about the administration of the republic and the conflicts that followed (only after Štefánik’s death) until the country was split by Nazi Germany in the wake of the Second World War, the first ČSR retains a mythological drive among both nations, and represents a sort of Golden Age in the modern history of the two countries. Both nations take pride in the constitutional and democratic principles the united country was founded upon, which were influenced by the US, the UK and France.

Masaryk, Beneš and Štefánik are considered to be the founding fathers of the first ČSR.

One of the most important roles that Štefánik played in the history of that state was in creating the Czechoslovak legions. His involvement was indispensable mainly during negotiations in Italy in 1918, according to historian Michal Kšiňan from the Institute of History of the Slovak Academy of Sciences (SAV). In addition, Štefánik participated in creating the legions in Russia and France.

“He was a very skilled diplomat and he in fact introduced the Czechoslovak question into the highest circles in France at the beginning of the war,” Kšiňan said.

Not only Slovaks and Czechs, but also the French, who have some connections with central Europe, recognise Štefánik’s importance.

Kšiňan denies frequent claims that without Štefánik the founding of the ČSR would not have been possible, but stressed that Štefánik played an important role and without him the road to the Czechoslovak state would have been much more complicated.

It was a matter of dispute during the first ČSR whether the foreign resistance, that is Masaryk, Beneš and the legionaries, deserved more credit for the republic’s emergence, or the men at home.

“In 1916 Štefánik significantly influenced the entire strategy of the Czechoslovak movement abroad and he had a key part in the emergence of the Czechoslovak foreign troops that were politically subordinate to the Czechoslovak National Council,” Bohumila Ferenčuhová from the Institute of History of SAV told The Slovak Spectator. “In his own words – this army was an attribute of national sovereignty.”

Historical documents show that Štefánik had a greater level of self-administration in mind for Slovakia within the Czechoslovak Republic.

He was a Czechoslovakist, Kšiňan admits, “but I believe his Czechoslovakism was political from the viewpoint that he considered the ČSR to be the best form of some state establishment that Slovaks could live in”.

At the start of WWI, Štefánik was convinced that Slovaks had only two alternatives: either build a common state with the Czechs, Moravians and Silesians, or remain part of Hungary, “where they might be able to cultivate their folklore, but their position wouldn’t change dramatically”, Ferenčuhová said.

Štefánik was raised in a prominent Slovak family that embraced the tradition of the 1848 Slovak national awakening and respected Jozef Miloslav Hurban (one of the leaders of the 1848 uprising) and his activities, according to Ferenčuhová.

“Štefánik’s identity was Slovak, but open to Czecho-Slovak cooperation,” Ferenčuhová noted. “Besides, Štefánik was interested in the whole world; he was open to learning about all cultures, mainly those which were less known.”

The communist regime attributed little significance to Štefánik. There may have been several reasons for this, according to Kšiňan. Firstly, at the end of 1918 Štefánik travelled for a mission in Siberia where he led the Czechoslovak troops against the Bolsheviks. Secondly, the communists interpreted history as being moved by the masses, and therefore they were trying to suppress the claim that individuals like Štefánik, Masaryk or Beneš stood behind the creation of the Czechoslovak Republic, but rather pretended that it was the result of the Great October Socialist Revolution.

Štefánik died young and his death is surrounded by various myths: the most common one being that the fatal plane crash was the result of a Czech conspiracy against him.

Based on the information that historians pose, it is clear that neither Beneš nor Masaryk envisioned Štefánik in any important post, Kšiňan said. This is largely due to the fact that until 1918 the fate of Czechoslovakia was decided mainly abroad, in France, the UK, Italy and the US.

“Mainly in Italy and in France Štefánik had a strong position and influence over things,” Kšiňan told The Slovak Spectator.

After the war, when the republic was created, the decision-making was transferred home, and there Štefánik’s position was considerably weaker compared to his influence in international circles. In light of that, a conflict was inevitable sooner or later, “and it is questionable how Štefánik would have come out of it”.

The truth is that Štefánik died on his way back to Slovakia where his friends were expecting him with great anticipation, Ferenčuhová noted. Prominent Slovak politicians were pinning their hopes on Štefánik, as well as his experience and charisma.

Many of his contemporaries considered Štefánik a genius, according to Ferenčuhová. As often happens with geniuses, however, his life expired too early, which prevented him from becoming an internationally recognised scientist, astronomer, traveller, photographer or politician.

“He alone believed – as the sources record – that his work in the Czechoslovak resistance movement during WWI was not visible enough and that it wouldn’t be appreciated in the future,” Ferenčuhová told The Slovak Spectator.