POSING questions to European institutions or delivering speeches in the plenary of the European Parliament are among the top tasks for MEPs working in Brussels and Strasbourg. When it comes to numbers, many of Slovakia’s European parliamentarians are among the best, or at least above average, in attending votes and other day-to-day activities. Not all the questions and speeches they offer, however, are necessarily relevant. 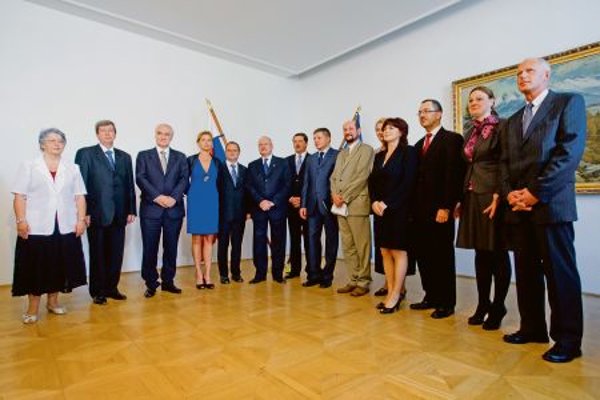 POSING questions to European institutions or delivering speeches in the plenary of the European Parliament are among the top tasks for MEPs working in Brussels and Strasbourg. When it comes to numbers, many of Slovakia’s European parliamentarians are among the best, or at least above average, in attending votes and other day-to-day activities. Not all the questions and speeches they offer, however, are necessarily relevant.

Members of the European Parliament (MEPs) representing Slovakia ranked third in the participation in roll call votes in the parliament, according to the MEP Ranking website. Besides the participation in roll call votes, the ranking also looks at the activities that are typically part of the work of an MEP. Among the relevant categories are questions, motions, reports, amended reports, opinions, speeches and declarations.

On average, Slovak MEPs participated in 89.8 percent of roll call votes, which makes Slovak MEPs statistically more active than their colleagues from the Czech Republic, Poland (both about 85 percent), and Hungary (some 80 percent). Austrian MEPs are the most active, with almost 91-percent attendance, while Estonia ranks second. On the other hand, the last, 28th in the ranking, are MEPs from Lithuania, who on average missed one-quarter of all roll call votes. Similarly, MEPs from Cyprus, Greece, Malta and Italy skipped more than one-fifth of all the roll call votes.

Roll call votes are only used for votes that are contested and absolute majority voting, and votes that require qualified majority voting. Otherwise, the MEP votes mainly via a show of hands: the session president casts an eye over the raised hands and judges where the majority lies, without counting the exact number for or against.

Some of the Slovak MEPs place high in the ranking based on their activities in the European Parliament too. The most active Slovak MEP has been Flašíková-Beňová, who ranked seventh out of all the 756 MEPs in the number of activities, with a total number of 2,609 activities as of May 5, according to MEP Ranking. The number is mostly made up of speeches in the plenary (1,689) and parliamentary questions (888).

The parliamentary questions are the MEPs’ tool to scrutinise other EU bodies and institutions. They can be asked in the plenary, during plenary sessions and question time, or in writing – requiring a written answer. Observers have noted in the past that parliamentary questions, along with speeches in the parliament, which can also be delivered in written form, are an easy way to boost an MEP’s activity rating, and that some MEPs have been using them to that end deliberately. The most active MEP according to the ranking is Portuguese representative Diogo Feio, who leads the ranking with 3,645 activities. While 2,055 of them are speeches in the plenary, 1,492 are questions.

Back to Slovakia’s MEPs, Flašíková-Beňová asked 19 written questions in 2014. Almost all of those questions were delivered on February 12 and covered a wide range of topics, including the bee shortage in the EU, the origin of meat in the EU, demonstrations in Egypt, changes to the law on Ukraine, new rules for tobacco products, energy poverty and rising electricity bills.

As for parliamentary speeches, Flašíková-Beňová mostly submits them in written form. Most recently she spoke, for instance, on the sound level of motor vehicles, rice imports from Bangladesh, in-vitro diagnostic medical devices, imports of timber and on vulnerable groups in Syria.

The second most active Slovak MEP based on the MEP Ranking is Jaroslav Paška, whose 654 activities put him in 101st place among 765 MEPs. Unlike Flašíková-Beňová, he delivered most of his 568 speeches orally, within the parliamentary debates. He addressed topics such as shipments of waste, deposit guarantee schemes, European business centres in Asia, equality between women and men, and the use of armed drones.

Anna Záborská is the third most active Slovak MEP, with 630 activities putting her in 112th place. Her recent speeches in the plenary concerned a range of topics, among them new psychoactive substances, religious freedoms and cultural diversity, Russian pressure on Eastern Partnership countries and in particular the destabilisation of eastern Ukraine, 100 years on from the First World War, and reducing the consumption of lightweight plastic carrier bags. She asked 61, mainly written, questions. Most recently, for instance, she asked the European Commission to define gender equality, addressed the rights of children, religious education at schools, and sexual and reproductive health policy.

EP not a priority

The least active Slovak MEPs were Sergej Kozlík with 102 activities, Peter Šťastný with 126 activities and Boris Zala with 142 activities.

“Not all MEPs are equally active, obviously, and not all of them work with an agenda that would be key for the current development of European integration and the position of Slovakia in the EU,” said Vladimír Bilčík, an analyst with the Slovak Foreign Policy Association (SFPA) non-governmental think tank, in an earlier interview with The Slovak Spectator.

Bilčík also blames the lack of communication between the MEPs and the national-level institutions in Slovakia. While some MEPs do have positions and are visible in the European Parliament, they are disconnected from the life of their party back in Slovakia: either they fell out with their parties back home, or their parties consider them practically retired.

“So there is definitely a lack of a more sophisticated and strategic approach by the parties to the whole thing,” Bilčík told The Slovak Spectator, adding that political parties do not see the nomination of good people as a worthwhile investment.

Some Slovak MEPs have been criticised for not devoting enough time to their activities in the EP due to other positions they held back home in Slovakia. This was the case, for instance, of Smer MEP Vladimír Maňka, who also served as the governor of the Banská Bystrica Self-Governing Region until the 2013 election, which he lost. His holding two chairs was one of the main arguments his competitors used against him in the campaign, similar to his party colleague Flašíková-Beňová, who ran for the top post in Bratislava Region, but also lost.

Group of the Progressive Alliance of Socialists and Democrats in the European Parliament (S&D)
– Monika Flašíková Beňová (Smer)
Agenda: Committee on Civil Liberties, Justice and Home Affairs, Delegation for relations with Israel

– Katarína Neveďalová (Smer)
Agenda: Committee on Culture and Education, Delegation to the EU-Kazakhstan, EU-Kyrgyzstan and EU-Uzbekistan Parliamentary Cooperation Committees, and for relations with Tajikistan, Turkmenistan and Mongolia

Group of the Alliance of Liberals and Democrats for Europe (ALDE)
- Sergej Kozlík (HZDS)
Agenda: Committee on Budgets, Delegation to the EU-Russia Parliamentary Cooperation Committee