The city at a crossroads

WHILE the billboards in this postcard of 1930s Žilina give the impression of a bustling city, we can tell the people in the street are actually villagers by the clothes they are wearing. 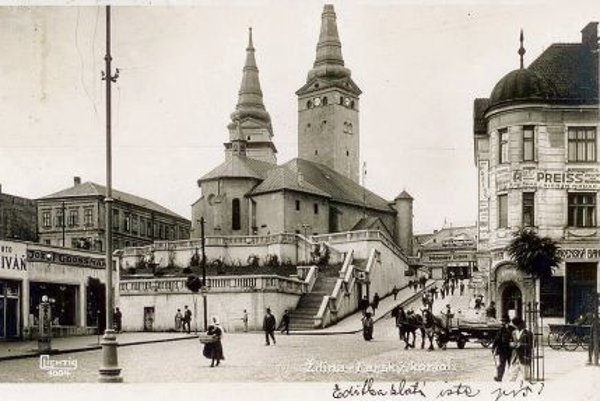 The explanation is simple: the photo was taken before cities were surrounded by urban sprawl. Back then the countryside began where the city ended, and one could reach a city’s border in a 20-minute walk from the centre.

The villagers in the postcard probably came into town to buy products or offer their own in the market. The woman in the middle of the street with a headscarf and a basket looks like a marketer. On the right one can see a horse-drawn wagon hauling wood slats. An inconspicuous petrol station on the left shows that cars were appearing in the city, too.

Many Slovak cities and towns boast that they were built on a crossroads of trade routes, and this was certainly true of Žilina. The city was built on the confluence of the Váh, Kysuca and Rajčianka rivers, which have been used as transport connections for centuries.

One trade route connected Žilina with Turiec and the eastern part of the Hungarian Kingdom. Another route headed through the Váh valley to Bratislava. A third led north to Silesia along the Kysuca River and reached Žilina via a bridge across the Váh. The bridge, which used to be wooden, was frequently destroyed by the river and had to be replaced numerous times. Financing its reconstruction became a bone of contention between the city and the Szunyog family who owned the land on the opposite bank. The bridge occupied six different sites over the years, and the route had to be altered accordingly.

It is interesting to note that these ancient routes can still be seen today in Žilina’s street plan.