PART OF an ancient Roman road with fragments of period artefacts was uncovered during construction work in Rusovce, on the outskirts of Bratislava. 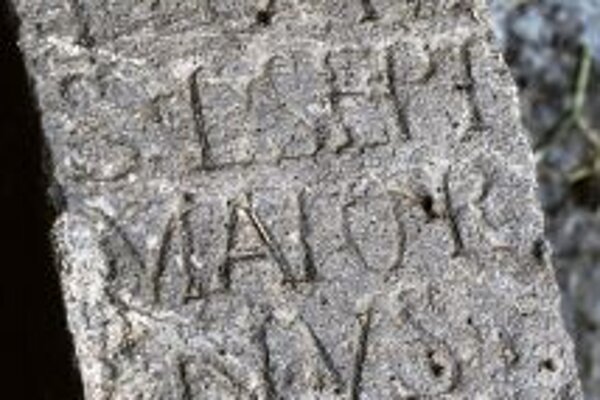 The ancientRomanaltar from the site in Gerulata-Rusovce (Source: TASR)
Font size:A-|A+0

PART OF an ancient Roman road with fragments of period artefacts was uncovered during construction work in Rusovce, on the outskirts of Bratislava.

“This is the original surface of the terrain of the road built by ancient Romans who lived there, in the locality of Gerulata,” Pavol Jelínek, head of the archaeological research from the Slovak Archaeological and Historical Institute (SAHI), told the TASR newswire. “It is a rural road, which probably led to other countryside settlements. The finding of a small altar is unique; such altars were placed along roads. When a Roman ventured on a trip, he usually stopped there and left a small gift for good luck. According to the inscription, the altar was dedicated to Jupiter Optimus Maximus, who was the main historically recorded deity in Gerulata.” Gerulata used to be a Roman military camp.

The finding dates to the second or third century and is unique since it was found in its original state, Jelínek added. The whole finding on Kovácsova Street in Rusovce, in the garden of a home planned for further development, has to be evaluated by expert professional committees.

“The altar is original, but due to the current uncovering of the terrain, it will be necessary to assess whether this really was an original ancient Roman road,” Jelínek explained.

Other items were found, too, in the process of preparing the plot for construction: e.g. pottery fragments, ancient Roman coins, clips and various accessories.

“These findings are important as, for example, the clips underwent changes due to certain fashion trends, and thus we can date the period more precisely, within a span of several decades. The coins, too, can serve this purpose. We can expect precise results only after they are restored,” Jelínek concluded.

The expert committees will also evaluate whether the findings are worthy of special protection, or if they will only be documented and covered re-buried under the new development. As the archaeological site lies two metres underground, the new buildings and the road will not disrupt the findings. The findings can also be relocated, Jelínek added.

Mikuláš Feník of the Slovak Monuments Board told the SITA newswire that the uncovered road is unique for Gerulata, “due to the fact that they managed to find and document a road in the locality outside the settlement borders; these were not usually paved, not so highly structured and built with such technology as those in municipalities”, adding that this is only the second finding of its kind. The altar still needs to be evaluated and documented.