WHEN voting for members of the European Parliament, Slovak voters tend to be faithful to the political parties they support at the national level. The problem is, only a few actually bother to turn up to the polling stations, says sociologist Martin Slosiarik of the Focus polling agency. He believes timing the EP elections to coincide with other elections deemed more important by voters could help Slovakia shed its reputation as the country with the lowest turnout in EP elections. 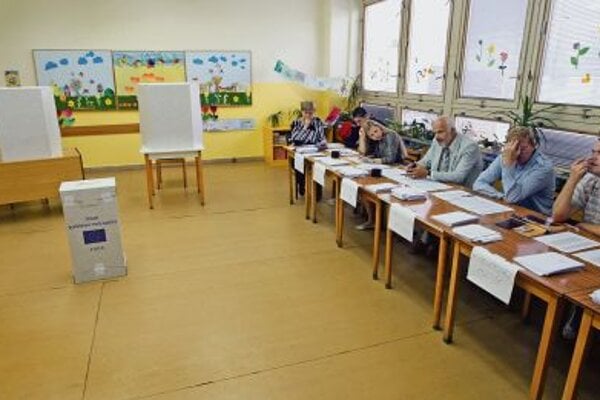 WHEN voting for members of the European Parliament, Slovak voters tend to be faithful to the political parties they support at the national level. The problem is, only a few actually bother to turn up to the polling stations, says sociologist Martin Slosiarik of the Focus polling agency. He believes timing the EP elections to coincide with other elections deemed more important by voters could help Slovakia shed its reputation as the country with the lowest turnout in EP elections.

The Slovak Spectator (TSS): What are the specifics of the EP elections? What are the differences concerning voter behaviour?
Martin Slosiarik (MS): Shortly after the first EP elections in 1979 a thesis about these being second-order elections appeared. The behaviour of voters in the EP elections differs compared to national parliament elections, mainly with the low voter turnout. Also, it turns out that at the EU level, ruling parties tend to get worse results than they do in the national elections, mainly in cases where the EP elections take place midway through the parliamentary election term. This is due to the fact that the ruling parties usually carry out unpopular measures in the first half of the election term, which might provoke discontent among voters. On the other hand, it should be noted that in Slovakia, this phenomenon has not been confirmed yet, since in 2004 the ruling Slovak Democratic and Christian Union (SDKÚ) and Christian Democratic Movement (KDH) got a better result than they did in the preceding parliamentary elections. However, the reason was probably that voters wanted to reward these parties for bringing Slovakia to the EU. Similarly, in 2009, Smer achieved a better result despite the fact that since 2006 it was a ruling party.

TSS: During the presidential election you stressed the difference between elections where voters select individuals and elections where voters choose an entire political party. What is this like in the EP elections? Is this really an election of parties or are the individual candidates’ personalities more important?
MS: I believe that the personalities that the parties run obviously play a certain role. Political parties realise that, as their candidates often feature someone who might stir interest among voters with their life story and the results they achieved as professionals. This strategy stems from the efforts to maximise the gain for the given political party. But the party principle dominates in the European elections, since it is not possible to circle candidates from different political parties. This is confirmed to some extent by the fact that in the EP elections voters remain faithful to the party they would support in the parliamentary elections, mainly when standard parties are concerned.

TSS: The EU elections have become notorious for low turnout. Slovakia’s turnout was the lowest in the EU five years ago. Why is that?
MS: It should be said that the turnout in the EP elections has been dropping continually since the 1979 elections, when the voters in the member states voted for their representatives for the first time in direct elections. In 1979 the overall turnout was 62 percent. In 2004 it was only 45.5 percent, and in 2009 it was as low as 43 percent. But this overall indicator needs to be analysed, too. If we take the turnout only in the original 15 member states, the trend has basically stabilised around 50 percent. Between the 1999 and 2004 elections it even increased from 49.5 percent to 52.7 percent. This makes it clear that the turnout is pushed down mainly by the new EU member states, even though there are significant differences among them too. For instance Malta posted almost 80-percent turnout in 2009 and Latvia had more than 50-percent turnout. Slovakia ended at the very bottom of the turnout ranking, both in 2004 with 17 percent and in 2009 with 19.6 percent. Polls show that Slovakia’s citizens belong among those with the most positive attitude towards the EU. That means that the mobilisation deficit in relation to the European elections does not have its roots in any euro-sceptical opinions of the public or in our discontent with the EU. But the mobilisation deficit also cannot be explained by the invisibility of the campaign. For instance, the Europe-wide poll after the 2004 elections showed that as many as 82 percent of Slovakia’s inhabitants noticed the campaign preceding the EP elections, which was the most after Malta and Sweden. Despite that, we have booked the historically worst result in the EP elections ever. It thus seems that Slovakia’s citizens mainly perceive the social-economic benefits of EU membership, but to a much smaller extent they exercise their rights that stem from their status as EU citizens, among them the right to elect their representatives in the EP. Certainly, political parties in Slovakia contribute to this attitude too as they do not actively work with European issues. So do the MEPs, who in most cases seem to disappear from the voters’ sight after they are elected, as well as the EU institutions, which often use bureaucratic language that is incomprehensible to a normal citizen. In the upcoming elections, the overall turnout can also be negatively impacted by the fiscal irresponsibility of some EU member states, and the subsequently prescribed financial solidarity which the citizens of the more responsible EU countries did not perceive very positively.

TSS: Does the ongoing campaign have the potential to increase the interest of voters, and thus turnout?
MS: I’m afraid we cannot reckon with a turnout that would significantly exceed 20 percent. I rather think the turnout will remain under this level. Several political parties are definitely taking efforts to actively address voters ahead of these elections, so I would not blame only political parties for the expected low turnout. I think that in our circumstances it will be very complicated to increase the interest of voters in the EP elections, since these elections have a low mobilisation charge for the voter. A significant part of Slovakia’s inhabitants who support our EU membership sees no reason for active participation and influencing of what happens in the EU, for instance by attending the elections. It is different for the part of the population that has reservations towards the EU. Due to their discontent, these voters might prove easier to mobilise for the parties who come up with criticism of the EU, or even with attempts to abolish it altogether. Turnout in the EP elections could probably be increased only through an artificial intervention – by joining the EP elections with some other elections that the voters perceive as more important.

TSS: PM Robert Fico said at the National Convention on the EU that there is a lack of conflict in the European topics and that is why people are not motivated enough to vote.
MS: I’m trying to think of what the conflict should be. After all, there are EU topics nowadays that the European factions have differing opinions about. And there are the main ideological streams of conservative, liberal, social-democratic and nationalist characters represented in the EU. The sole existence of these streams is a sufficient precondition for a diversity of opinions in the EP. The problem probably lies in the way this diversity is narrated to the regular citizens of the EU, and of Slovakia. So, there is a conflict, but in my opinion the citizens don’t really perceive it.