AFTER the success of their debut album, world music group Banda is coming out with its sophomore release, HraBanda. Their first album, Banda Jedna, released in 2011, reached number eight on the European World Music Chart and stayed in the Top 20 for several weeks. 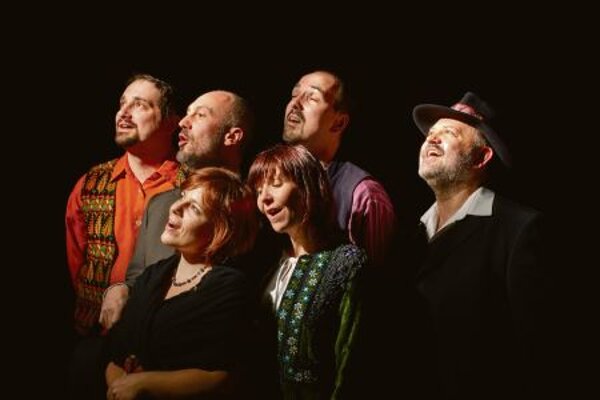 AFTER the success of their debut album, world music group Banda is coming out with its sophomore release, HraBanda. Their first album, Banda Jedna, released in 2011, reached number eight on the European World Music Chart and stayed in the Top 20 for several weeks.

The new album offers Banda’s unique re-arrangements of traditional Slovak songs, updating them for contemporary audiences. Sometimes the musicians stay close to the original versions, but other times they change the songs beyond recognition, incorporating a range of influences including jazz, blues, classical, rock and ethnic music from various countries. Since then, Banda composed music for a theatre piece and film called Dancing Among the Shards, written, choreographed and directed by Marek Ťapák, which offers an individual perception of folklore roots and one’s own past.

The new CD will be launched on May 20 in the Zrkadlový Háj cultural house in Petržalka. The evening’s guests will include musicians who played on the album, plus the CreDance ensemble, “with whom we perform the most these days”, Smetana told The Slovak Spectator, adding that “we invited excellent bagpiper and folk clarinet player, called the drček, Juraj Dufek, and our former percussionist, Roman Kozák, will help us on two compositions, and in the final, farewell song our friends from the female vocal ensemble Trnki, from Banská Bystrica, will sing with us” .

Smetana continued, “We will introduce all 15 songs from the new album, but in the end we may add an extra encore [with material] from our repertoire.” The performance will also feature rock guitarist Andrej Šeban, who did not perform on the new album, but as Smetana explains, “we have known him for a long time … and we share some common views concerning how important our folk music tradition is for contemporary music”.

Regarding Banda’s high placement in the European World Music Chart, Smetana said, “I think this achievement helped a bit to make us more famous with concert organisers, especially abroad, so that we had successful concerts in Poland, Italy, Austria, Germany and repeatedly in the Czech Republic”. He added that the work they did on the film soundtrack might have also generated interest in the band among people outside Bratislava.

Comparing the two albums, Smetana said, “We have a slightly different cast: singer Eva Brunovská joined us, who also plays keyboards, and drummer Ajdži (Igor) Sabo. Several changes stem from this: more solo and specifically female-sung songs made it into our repertoire, and we can use balanced vocals for two female and two male voices, and a delicate touch with sampled keyboards resembling accordion was added, as well as harmonium and classic Hammond organ…. And I also think that we have a more elaborate rhythmic side to our music, we use polyrhythmic features, etc.”

“Compared to the first album, the ratio of traditional music to new … [compositions] is about the same … but I think that the traditional folklore basis is always recognisable,” Smetana told The Slovak Spectator. “These are originally folk songs and instrumental melodies from the Slovak regions of Požitavie, Záhorie, Orava, Považie, Gemer, Liptov, Podpoľanie and Horehonie, as well as from the Vojvodina region in Serbia, Western Ukraine and the region of Asturia in Spain.”

“We are planning concerts at Slovak, Moravian and Polish festivals,” Smetana said on future plans, with “the biggest being the Folklore Festival Východná (in Slovakia), Czeremcha (in Poland) and the Lodenica Piešťany festival. In early autumn there will be smaller city festivals and for the break of October and November, we will try to prepare a tour of bigger cities.”

“Our album HraBanda is a creative combination of Slovak folklore music and other genres, like blues, funk, beat, Latino, reggae and also some other ethnic musical styles,” the Banda leader told the SITA newswire. “It could also be called ‘progressive folklore’.”