THIS YEAR’S Slovak Esprit Awards, recognising the best Slovak jazz albums of 2013, were timed to coincide with International Jazz Day. The competition’s second year began on March 13 and culminated on April 30 with the awards ceremony and a concert in the Slovak Radio building. 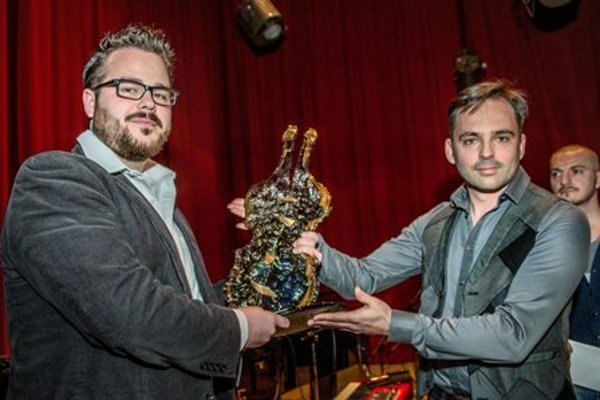 THIS YEAR’S Slovak Esprit Awards, recognising the best Slovak jazz albums of 2013, were timed to coincide with International Jazz Day. The competition’s second year began on March 13 and culminated on April 30 with the awards ceremony and a concert in the Slovak Radio building.

Three years ago UNESCO set April 30 as International Jazz Day to boost jazz’s visibility and stress its role in connecting people globally, the TASR newswire wrote. Legendary US jazz pianist Herbie Hancock, who is the goodwill ambassador of UNESCO, became the patron of this day together with Irina Bokova.

In 2010, Hancock was the first to receive the award, a statuette designed by Slovak artist Gordana Turuk, featuring a silhouette of a double bass. Last year, Slovak musician Michal Bugala received the statuette, and in 2014, Lukáš Oravec won it for the album Introducing Lukáš Oravec Quartet, Featuring Radovan Tariška. Michal Motýľ Tentet placed second with his Sunflowers album, and third place was split between Ondrej Krajňák for his Forevernest album and Milo Suchomel for Jazz in the City, Volume 1. Suchomel won in the public poll after receiving 1,665 votes out of more than 4,000.

“The main goal of the Esprit Award is to make the works of Slovak jazz musicians more visible, as well as Slovak jazz,” organiser Boris Čellár told TASR. “Many albums are released here – 19 in total in the last two years and 16 this year – which are of good quality and at a European level. They should make it to the wider public, as their marketability is not as high as it could be. The key is to get jazz music to the people. Of course, we are glad that things are happening in jazz, as we can also draw the attention of [people] abroad, as well as of people who are more into mainstream [music].”

Hancock sent Čellár a letter (together with Tom Carter of the Thelonious Monk Institute of Jazz) this year in which he thanked him for handing out the awards and celebrating International Jazz Day.