Harabin failed in his bid to be re-elected

ŠTEFAN Harabin failed, on May 19, in his bid to be re-elected as head of the Supreme Court and Judicial Council, the body overseeing the country's judiciary. 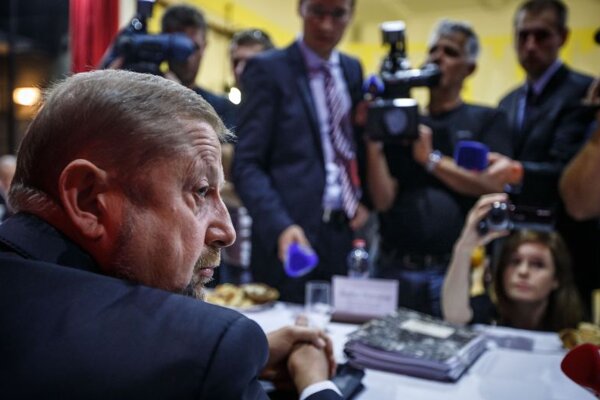 ŠTEFAN Harabin failed, on May 19, in his bid to be re-elected as head of the Supreme Court and Judicial Council, the body overseeing the country's judiciary.

Harabin collected seven votes in the first round of the vote held in Sobrance, eastern Slovakia, and advanced to the second round along with Jana Bajánková, nominated by Justice Minister Tomáš Borec, who got five votes. The third candidate, Zuzana Ďurišová proposed by the For an Open Judiciary (ZOJ) group critical of Harabin, received three votes in the first round. A candidate needed at least 10 of the 16 votes of members of the Judicial Council to get elected to the post.

In the second-round run-off, Harabin got six votes only with his rival Bajánková picking five votes. The new elections should be announced within 120 days, however after twice failing in this round, neither Harabin nor Bajánková is eligible to run in this new round, the SITA newswire reported.

The Judicial Council session, held in Sobranovce's local House of Culture, attracted a gathering of some 50 people, including civic activists who demand a change in the judiciary's state of affairs.

"Ensuring the rule of law in Slovakia is quite a problem. Some illegal practices are organised with knowledge beforehand that the perpetrators are untouchable," said activist Andrej Lúčny, as quoted by the TASR newswire. "Not even the best system can yield good results if the individual nominations are bad."

Meanwhile, more than 11,000 people signed a petition stating they do not want Štefan Harabin to continue as the head of the judiciary for another term. The activists who initiated the petition passed it on to the members of the Judicial Council, which convened on May 19 in the eastern Slovak town of Sobrance to elect the new Judicial Council head.

Gábor Grendel from the Nova party, who heads the petition committee, submitted the petition to Štefan Harabin before the council session opened.

The activists began collecting the signatures about a month ago, when Harabin announced that he would run for re-election.

Another campaign was launched by the Fair-Play Alliance political fairness watchdog on May 12 calling on Prime Minister Robert Fico to prevent Štefan Harabin and other candidates with similar views from being elected as Supreme Court president and Judicial Council chair.

“Mr premier, use now the weight of your authority, your indisputable political experience and the power of your mandate from voters,” reads the open letter to Fico as quoted by the SITA newswire. The PM should act to free the judiciary from the influence of Harabin or other people with similar ethical values or perceptions of the judiciary, according to the letter.

Media speculated prior to the election that Harabin, whose term ends on June 23, after the late March presidential election run-off that saw Prime Minister Robert Fico lose to philanthropist Andrej Kiska, rushed to set the date for the elections for May 19 in an apparent attempt to secure re-election before Kiska takes office on June 15.

Kiska, who earlier had suggested he would never appoint Harabin if he were elected, on May 14 called on the members of the Judicial Council, who elect the next court president, to take a responsible approach, as their decision “will influence the character of the judiciary”.

A moral and professional authority should manage the Supreme Court, said Kiska, adding that the judiciary is one of the biggest problems in Slovakia and thus the council members will have to choose between continuity and change.