CRITICS of Štefan Harabin rejoiced after they saw him fail on May 19 in his bid for re-election as the head of the Supreme Court and the Judicial Council, the body overseeing the country’s judiciary. Harabin, however, rejects that his failure to collect at least 10 of the 16 votes of members of the Judicial Council in the first and second round of the election actually means that his term at the helm of the Supreme Court is over. 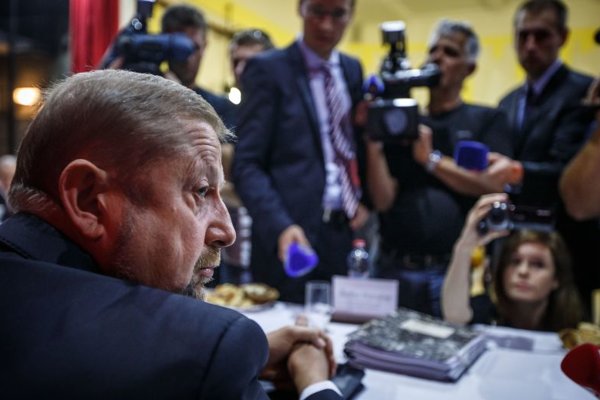 CRITICS of Štefan Harabin rejoiced after they saw him fail on May 19 in his bid for re-election as the head of the Supreme Court and the Judicial Council, the body overseeing the country’s judiciary. Harabin, however, rejects that his failure to collect at least 10 of the 16 votes of members of the Judicial Council in the first and second round of the election actually means that his term at the helm of the Supreme Court is over.

“Have I lost? What are you talking about?” Harabin responded in an interview with the Sme daily to the question of whether he is unable to accept his defeat. “I won because I had the highest number of votes.”

Harabin also said that he would enrol in the next election of the Supreme Court president if the judges wish him to do so. Nevertheless, the candidates who failed to get elected in the first election, held in Sobrance in eastern Slovakia, are not eligible to run in the next round, which the Judicial Council should announce within 120 days.

Harabin collected seven votes in the first round of the vote and advanced to the second round along with Jana Bajánková, nominated by Justice Minister Tomáš Borec, who got five votes. The third candidate, Zuzana Ďurišová, proposed by the For an Open Judiciary (ZOJ) group critical of Harabin, received three votes in the first round.

In the second-round run-off, Harabin received only six votes, with his rival Bajánková picking up five votes. The new elections should be announced within 120 days. However, after twice failing in this round, neither Harabin nor Bajánková is eligible to run in the new round, the SITA newswire reported.

The Judicial Council session, held in Sobrance’s local House of Culture, attracted a gathering of some 50 people, including civic activists who demanded a change in the judiciary’s state of affairs, the TASR newswire reported.

According to Sme, representatives of the embassies of the Netherlands and the United States also travelled east to personally observe the course of the vote, which is particularly crucial for the future of the country’s judiciary.

Former justice minister Lucia Žitňanská commented on the voting statistics that it seems Prime Minister Robert Fico and the judges have still not understood that Harabin harms the image of the Smer party as well as image of the Slovak judiciary.

“Today I see not electing any of the candidates to the post of president of the Supreme Court as a second chance for those who can nominate good candidates for the next election,” said Žitňanská of the opposition Most-Híd.

The media speculated prior to the election that Harabin, whose term ends on June 23, after the late March presidential election run-off that saw Fico lose to philanthropist Andrej Kiska, rushed to set the date for the elections for May 19 in an apparent attempt to secure re-election before Kiska takes office on June 15.

Kiska, who earlier had suggested he would never appoint Harabin if he were elected, on May 14 called on the members of the Judicial Council, who elect the next court president, to take a responsible approach, as their decision “will influence the character of the judiciary”.

A moral and professional authority should manage the Supreme Court, said Kiska, adding that the judiciary is one of the biggest problems in Slovakia and thus the council members will have to choose between continuity and change.

Shortly before the vote, outgoing president Ivan Gašparovič said he sees no reason not to appoint Harabin or any of the candidates if elected to the post of Supreme Court president.

“As far as the appointment is concerned, if he is further elected to the post, then the president, be it the current or the future one, does not have a reason to refuse his appointment, because it is a completely different situation from when I refused to appoint the prosecutor general,” said Gašparovič, who was heavily criticised by his critics for refusing to appoint Jozef Čentéš, selected by parliament in a legitimate vote, to the post of general prosecutor, as quoted by SITA.

Gašparovič said that if the president refuses to appoint Harabin, he would certainly turn to the European Court for Human Rights and win the case, according to SITA.

More than 11,000 people signed a petition stating they do not want Harabin to continue as the head of the judiciary for another term. The activists who initiated the petition had passed it on to the members of the Judicial Council before the vote.

Another campaign was launched by the Fair-Play Alliance (FPA) and a number of artists, journalists and public figures who called on Fico to use his authority and the strength of his political mandate to act in a way “that the judiciary is finally freed from the influence of Štefan Harabin or persons with a similar ethical or value system or similar perception of the judiciary”.

The FPA argued that the incumbent has become a symbol of what the organisation calls an ailing judiciary and a critical lack of trust among Slovaks in the judiciary.

A letter that the FPA drafted for the prime minister lists several reasons why Harabin is unacceptable, including the argument that the general prosecutor has repeatedly confirmed that “he had a friendly phone call with a representative of the Albanian drug mafia in Slovakia”.

The FPA also objects to how during his career, Harabin was switching between judiciary and political functions “while he linked his political career with a party, which pushed Slovakia to international isolation, and participated in violating the constitution and trampling on democratic rights”, referring to Vladimír Mečiar’s Movement for a Democratic Slovakia (HZDS), which nominated Harabin as justice minister in 2006.

The FPA also objects to Harabin having failed in his posts to support measures to strengthen the fight against corruption and to reform the judiciary. As chairman of the Supreme Court, Harabin refused to introduce random assignment of files to judges despite the fact that it was requested by law, the FPA said. Harabin was also supportive of hundreds of judges who collectively sued the state over what they called wage discrimination, an act which the FPA calls immoral.

The FPA also pointed out that Harabin has been suing the media for libel while demanding inappropriately high damages, arguing that such lawsuits were intimidating and contributed to the deformation of the freedom of speech.

According to the FPA, Harabin has attacked his critics in unacceptable, aggressive and even vulgar ways that are incompatible with ethics and decent behaviour, with the most publicised statement of his being: “you will go to jail, bastard”, which he addressed to former justice and interior minister Daniel Lipšic. Harabin treated his critics within the judiciary abusively when he transferred them beyond their long-term specialization and declined to approve their work-related trips and educational activities, the FPA claims.

Meanwhile, the FPA also called on the media to report in detail on the candidates so that the public can get a better idea of their values and professional background.

Amid protests by political ethics groups opposing Harabin’s desire to become the Supreme Court president, the Judicial Council nearly unanimously elected him to the post in June 2009. Harabin, born in Ľubica, was nominated as justice minister in 2006 by HZDS and moved to the ministry from his position as a justice of the Supreme Court.

For the period of his ministerial term his duties as a judge were suspended. When elected to the top judicial post, the former minister went straight on to serve as the head of the Judicial Council, which oversees the operation of all courts in Slovakia.

Harabin graduated from the University of Pavol Jozef Šafárik in Košice in 1980. Since then, he has worked in the judiciary as a district, regional and Supreme Court judge. From 1998-2003 he was the chief justice of the Slovak Supreme Court, and later became the head of the Judicial Council (2002-2003).