CRITICS of Štefan Harabin rejoiced after they saw him fail in his May 19 bid for re-election as the head of the Supreme Court and the Judicial Council, the body overseeing the country’s judiciary. Harabin, however, rejects that his failure to collect at least 10 of the 16 votes from members of the Judicial Council in the first and second round of the election actually means that his term at the helm of the Supreme Court is over. 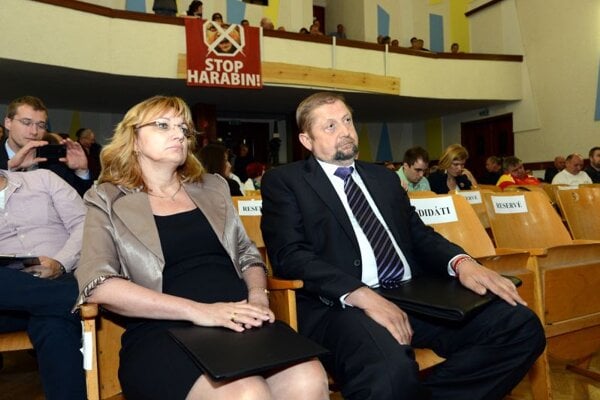 CRITICS of Štefan Harabin rejoiced after they saw him fail in his May 19 bid for re-election as the head of the Supreme Court and the Judicial Council, the body overseeing the country’s judiciary. Harabin, however, rejects that his failure to collect at least 10 of the 16 votes from members of the Judicial Council in the first and second round of the election actually means that his term at the helm of the Supreme Court is over.

“Have I lost? What are you talking about?” Harabin responded in an interview with journalists to the question of whether he is unable to accept his defeat. “I won because I had the highest number of votes.”

In eastern Slovakia’s Sobrance, where Harabin summoned the vote, he failed to collect at least 10 of the 16 votes of members of the Judicial Council in the first and second round of the election. Nevertheless, this development means that outgoing President Ivan Gašparovič, despite his previously declared willingness to appoint Harabin if he is elected, will have no say in the issue. Instead, the decision will be in the hands of his successor Andrej Kiska, who has said he would not appoint Harabin due to his history within the judiciary.

Candidates who failed to get elected in the first election are not eligible to run in the next round, which the Judicial Council should announce within 120 days.

But if the 16-member Judicial Council fails to elect the next Supreme Court president, another, third round occurs, and that one is reopened to failed candidates from the first round, according to the rules. Harabin has said that he would enter that third round if the judges wish him to do so.

Harabin has clearly lost the political support that he has so far enjoyed from the governing Smer, said Grigorij Mesežnikov, president of the Institute for Public Affairs (IVO) about the outcome of the vote in an interview with the TASR newswire.

While during his presidential campaign Prime Minister Robert Fico said that he would not recommend Harabin to seek re-election, on May 21 he said that he will in no way get involved in the election of the Supreme Court president.

“I will not try to do anything to influence [the vote] as the way the Judicial Council proceeds in this very serious personnel issue is entirely and only a matter of the council,” said Fico, as quoted by the SITA newswire.

Harabin collected seven votes in the first round of the vote and advanced to the second round along with Jana Bajánková, nominated by Justice Minister Tomáš Borec, who got five votes. The third candidate, Zuzana Ďurišová, proposed by For an Open Judiciary (ZOJ), a group critical of Harabin, received three votes in the first round.

Jana Bajánková was backed by Ľuboš Sadovský, a government nominee; Eduárd Barány and Mária Bujňáková, both the president’s nominees; and Ján Vanko and Milan Ďurica, both nominated by judges. Bystrianska voted against and the rest abstained from voting.

Ďurišová was backed by Čimo, Čirč and Peter Straka, nominated by judges, while all other judges abstained from voting.

Interestingly, Fulcová, a former classmate of Fico, supported Harabin in the first round but not in the second round, Sme reported.

Bajánková was backed by Sadovský, Barány, Bujňáková, Vanko and Ďurica, while the rest abstained from voting. Bajánková did not receive a single vote from members of the council who were elected by the Smer-dominated parliament, though she was a nominee of the justice minister, backed by Smer.

The media speculated prior to the election that Harabin, whose term ends on June 23, rushed to set the date for the elections for May 19 in an apparent attempt to secure re-election before Kiska takes office on June 15.

Kiska, who earlier had suggested he would never appoint Harabin if he were elected, called on May 14 on the members of the Judicial Council, who elect the next court president, to take a responsible approach, as their decision “will influence the character of the judiciary”.

Shortly before the vote, Gašparovič said he saw no reason not to appoint Harabin or any of the candidates if elected to the post of Supreme Court president. Gašparovič has also said that if the president refuses to appoint Harabin, if elected, he could certainly turn to the European Court of Human Rights and win the case, according to SITA.

Via Iuris, a judicial ethics watchdog, has been saying that Gašparovič, whose term elapses on June 15, cannot make the appointment but will have to leave it up to Kiska, as the post becomes vacant under Kiska’s official term. Via Iuris based its claim, which also pertains to the appointment of the judges of the Constitutional Court, on an analysis signed by a number of legal experts.

“If Ivan Gašparovič appoints them anyway, he would disrespect the Constitution of Slovakia,” Via Iuris stated.

Gašparovič responded on May 26 that the outgoing president will follow Slovakia’s constitution and not what Via Iuris says.

“I know the constitution and I am still in the position of president,” Gašparovič said, as quoted by TASR.

However, the numbers suggest that Gašparovič will not be able to appoint the next court president: the new election must be held no later than 120 days after the failed round, held on May 19, while the head of the Judicial Council must announce the date of the new election 45 days before it is to be held. Thus, the election must be announced between July 3 and September 16, while Kiska will be sworn in as president on June 15.

Fico said he expects Borec to come up with a proposal for a candidate as he did in the case of Bajánková.

Fico refused to comment on the course of the two rounds of voting at the Judicial Council, yet he said that politicians and non-governmental organisations cannot do what they have been doing.

The Judicial Council session, held in Sobrance’s local House of Culture, was open to the public and a number of activists showed up with posters and t-shirts featuring slogans opposing Harabin.

According to Sme, representatives of the embassies of the Netherlands and the United States also travelled east to personally observe the vote, which is particularly crucial for the future of the country’s judiciary.

The head of the Fair-Play Alliance (AFP), Zuzana Wienk, suggested in her blog that the outcome on May 19 would never have happened without the diligent work of activists, diplomats and media and the gradual revolt of the public against the conditions within Slovakia’s judiciary.

“Harabin’s defeat is clear news that politicians and the judges have become aware that Harabin’s style is dragging them to the bottom,” Wienk wrote.

Wienk also sees a danger in what is happening now: the power centre in the judiciary is moving towards Smer, which is now amending the make-up of the judiciary. She suggested that it is important that the public keeps an eye on who will be nominated to the posts so that "vulgar sucessors of Mečiar" are not replaced by "cynical businessmen" who will pull the same strings.