THE Ukraine crisis highlights how Europe has failed to develop a strong common foreign policy. Such challenges may provide an opportunity for the European Union, according to Dutch MEP Marietje Schaake, who spoke at the GLOBSEC international security conference held in Bratislava from May 14 to 16. Schaake focuses on a variety of issues at the European level and The Slovak Spectator spoke to her EU approach towards Ukraine as well as privacy and copyright protection in EU. 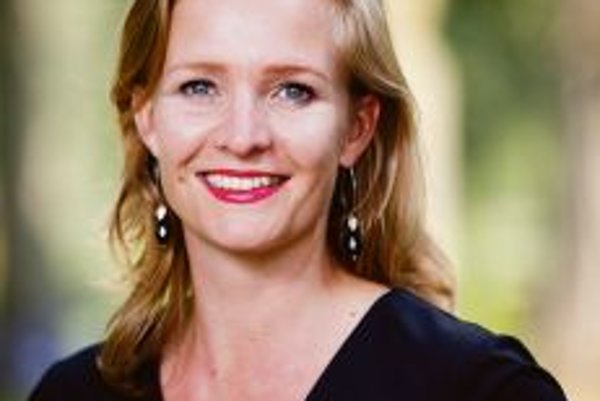 THE Ukraine crisis highlights how Europe has failed to develop a strong common foreign policy. Such challenges may provide an opportunity for the European Union, according to Dutch MEP Marietje Schaake, who spoke at the GLOBSEC international security conference held in Bratislava from May 14 to 16. Schaake focuses on a variety of issues at the European level and The Slovak Spectator spoke to her EU approach towards Ukraine as well as privacy and copyright protection in EU.

The Slovak Spectator (TSS): Elections to the European Parliament are being held in all EU member states. Conventional wisdom suggests that Europeans are not that interested in the work of EU institutions. Slovakia traditionally has the lowest turnout in these elections. How can the member states improve this situation?
Marietje Schaake (MS): I cannot speak to why Slovak people don’t go to polls but I think they should because we deal with economic development, and a lot of investment in this country comes from other European countries. There are ties with other member states and European cooperation making the internal market stronger, securing more exports and trade so we can develop economic growth, but also creating opportunities for young people through education or ending youth unemployment. Also, keep in mind issues such as the environment or fighting organised crime. There are lots of topics that are only solved when countries work together.

If people have doubts they should keep in mind that if they don’t decide who represents them, politics will decide for them. We have a democracy and a quality of life that we cherish. And it requires daily work and it also requires citizens to go vote once every five years and I hope that’s not too much to ask.

TSS: Do you expect a low turnout in this year’s elections? What campaign issues are resonating the most in the Netherlands?
MS: We hope to get high turnouts and I am very focused on it. I’m sharing a lot of my work in social media, I’ve been very active in going to universities and gatherings of people in cafes and political discussions and going on television, radio and the internet to talk about what we do and to also answer questions from people.

The EU is sometimes a big unknown for people and it’s not so much about Europe, but it’s about concrete topics like jobs, creating a digital single market or ensuring that we can defend ourselves with the appropriate capacity. Every member state is cutting budgets and we aren’t buying military supplies smartly together, and we aren’t training people smartly together, while we have had a very serious wake up call from the crisis in Russia to realise that hard power, sadly, still matters. Europe is the champion in soft power, diplomacy and development, but we can do so much more if we bundle our political voices and if we make sure we also have sufficient and adequate defence when needed.

TSS: In the Foreign Affairs Committee you are focusing on strengthening Europe as a global player. How do you assess the steps the EU has taken so far regarding the crisis in Ukraine?
MS: We need a stronger Europe on the global stage and the crisis in Ukraine has only reminded us of how urgent we need to make sure that we have a strong common foreign and security policy. Sadly, we haven’t proactively been able to make that happen and it has been too slow. It’s probably because of the debt crisis. The economic crisis has really taken a lot of our attention, and rightfully so because we need to make sure that we are economically healthy, but the rest of the world is not waiting until Europe gets its act together; we have to do that ourselves.

However, if there is one thing we have learned over the past years it’s that when we are presented with difficult situations, everything becomes fluid and everything can change. So hopefully we will seize this moment and the member states will also understand that it is not about egos or individual roles, but this is really about sustaining our quality of life, interest and values like human rights. Different voices are fine, different languages are fine, but one strong political agenda in a very rapidly changing world that presents Europe – from Russia to North Africa and the Middle East - with very serious challenges.

TSS: You are part of the GLOBSEC discussion on balancing security and privacy. What are the main challenges in this matter?
MS: The EU, also when it comes to the digital economy or digital freedoms, should show more leadership in the world. The US has a serious credibility problem and the suggestion that security and freedom are zero sum, so that security is sometimes used as an argument to restrict people’s freedoms, is a very dangerous development which is enabled by the availability of technologies that allow mass surveillance. We have not done enough to assure the proper democratic oversight. So what we need are democratic principles, such as oversight, innocent until proven guilty principles, or guaranteeing privacy, access to information, freedom of expression and competition on the internet.

Europe should seek a leadership role, not only at home but also in internet governance through international cooperation with other global players to make sure that in this globalised and hyper-connected environment people using the internet anywhere can count on European leadership to protect them and the public interest. Now it’s mainly companies dominating the internet and the internet sector; we also need to save part of the public interest and democratic values.

TSS: Has the PRISM scandal affected the EU’s approach to the issue?
MS: It has certainly created a lot more awareness, particularly awareness of how technologies are changing our lives. The opportunities we know, but the threats are what more and more people are now aware of. Now it’s a more important political priority and sadly it’s not really leading to trust-building with the United States. We have not heard concrete measures from the US to regain the trust of the European population and European politicians alike. We need that trust because we are negotiating the Transatlantic Trade and Investment Partnership.

I’m doing that whole topic on behalf of a liberal group in the European Parliament. We do that to make trade easier, which is very important for economic growth, but we need public support to see the treaty ratified, and this NSA scandal has really caused damage to trust in the transatlantic alliance. It’s time for a fundamental discussion about what democratic principles mean in times of hyper-connectivity.

TSS: Europe’s Digital Agenda is another one of your priorities including the copyright dossier. EU is currently dealing with online piracy. For example the European Court of Justice banned downloading of copyrighted material from unlawful source. How should ordinary people illegally downloading music or movies be punished?
MS: The whole thinking about enforcement of prohibiting individual downloading from illegal sources is the wrong direction of the discussion. The court even says that it’s almost impossible to enforce a law banning downloading. They acknowledged that is difficult to enforce it, especially without looking at what people do on the internet anyway, and that is something we don’t want. We want people to be able to surf without the internet service provider or the government looking at what they are doing.

Instead of focusing on enforcement we should focus on reform. At this moment we have 28 different copyright systems for each EU country. It really hampers the development of a digital single market, [and] it hampers new services and start ups which could offer legal content and create more competition and lower prices. That’s where our attention should be.

I worked a lot on pushing copyright reform in the EU for the past five years but some of the member states have really not been helpful. Therefore, what I hope, and this is another reason why young people should vote, is if they want the internet to remain open and if they want to have access to interesting content and to do what they want online instead of the government or internet providers deciding for you, go vote. And choose someone who represents you to make sure that we invest in the economy of the future and not enforce outdated rules on the internet.