THE PUSH to create a common European Union market for energy is on, as Polish Prime Minister Donald Tusk touts a so-called energy union as part of efforts to weaken Russia’s ability to use natural gas supply as a political tool. 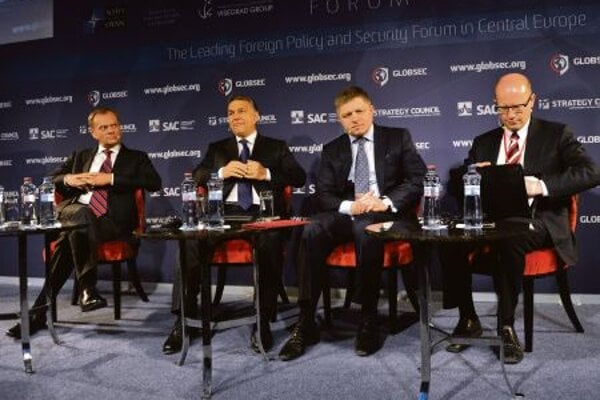 THE PUSH to create a common European Union market for energy is on, as Polish Prime Minister Donald Tusk touts a so-called energy union as part of efforts to weaken Russia’s ability to use natural gas supply as a political tool.

The issue was perhaps the central topic of discussion at the GLOBSEC conference on May 14-16 in Bratislava, as Tusk’s initiative drew support from his fellow Visegrad prime ministers during a joint panel discussion – as well as from leaders from further afield in Europe. There are also signs, however, of opposition from the EU’s most powerful country, Germany.

“We welcome his initiative,” Slovak Prime Minister Robert Fico said of the Tusk plan. “Part of it is a proposal for concrete measures and it corresponds with Slovak priorities.”

Others at the conference took a similar stand.

“There needs to be a single market for energy,” said Mario Monti, a former Italian prime minister and European commissioner.

Tusk’s plan seeks to break up the national pipeline and energy monopolies that dominate the European scene. Presently these companies sign individual contracts with suppliers. When it comes to natural gas this mostly means Russia’s Gazprom. Those contracts often include confidential clauses that limit whether or how that gas might later be used or resold. They are also under investigation by the European Commissioner for Competition Joaquín Almunia.

Slovakia’s contractual obligations with Gazprom complicated negotiations with Ukraine over the reverse flow of gas from Slovakia to Ukraine.

Among the key provisions in the Polish proposal are joint purchases that would allow EU members to approach Gazprom, or other suppliers, as a single customer. Tusk’s plan proposes two options for doing so, either setting up a European agency to oversee the gas purchases or forming a consortium comprised of the existing national gas companies. Doing so is likely to face opposition among groups that most benefit from the status quo, including existing national pipeline companies, but such changes would seek to lower prices through stronger bargaining power. It would also potentially weaken Russia’s ability to use gas supply and pricing as a political tool targeting individual member states.

But the same day the V4 leaders and others were offering support for the energy union, current European Commissioner for Energy Günther Oettinger issued a public rejection of the joint purchasing idea during an interview with the German daily Frankfurt Allgemeine Zeitung.

“Gas is a product, not a weapon of policy for the EU,” Oettinger said.

Oettinger’s term on the commission wraps up in October, but the interview was seen by many as a not so subtle reminder of Germany’s general position on the energy union issue, not to mention the country’s close ties to Russian gas through the Nord Stream Pipeline, which goes directly from Russia under the Baltic Sea and into northern Germany.

“The German Ministry of Foreign Affairs is less open to [Tusk’s energy union proposal] and indeed the words of Oettinger were a surprise to us,” said Marcin Zaborowski, director of the Polish Institute of International Affairs. “Their price per cubic metre is the lowest in Europe, so they perhaps have an interest in protecting that.”

The German position is also likely a reflection of a more general reticence to wade too deeply into international issues with the potential for provoking additional conflict, not to mention a larger divide in Europe about how direct a threat is presented by the Russian annexation of the Crimean peninsula and continued agitation in eastern Ukraine.

“People in Berlin feel like, ‘Oh no, we don’t want to deal with it,’” said Patrick Keller, coordinator of Foreign and Security Policy at the Konrad Adenauer Foundation, a think tank tied to the German Christian Democrats. “Especially in Poland and the Baltics, you get a reaction that says ‘We feel threatened more than before because of what happened in Ukraine.’”

“The threat analysis is different in Berlin than it is in Riga or Warsaw,” Keller added. “Geography and location determines your analysis in this conflict.”

A single European market for natural gas, never mind joint purchasing, would almost certainly mean Germany would have to surrender some of the competitive economic advantage it now enjoys as it taps into cheaper Russian gas.

“There is no solidarity for free,” Tusk said in Bratislava. “Europe needs to respond to this challenge frankly and without hypocrisy. Without that, any discussion is pointless.”