THOUGH the Environment Ministry supports mostly traditional measures to tackle floods, like building concrete flood prevention structures and dredging riverbeds, several mayors of municipalities stricken by the mid-May deluge are praising projects implemented by the previous government of Iveta Radičová. Among them are water levees created in forests that are designed to retain rainwater in the soil and thus mitigate flooding in nearby villages. 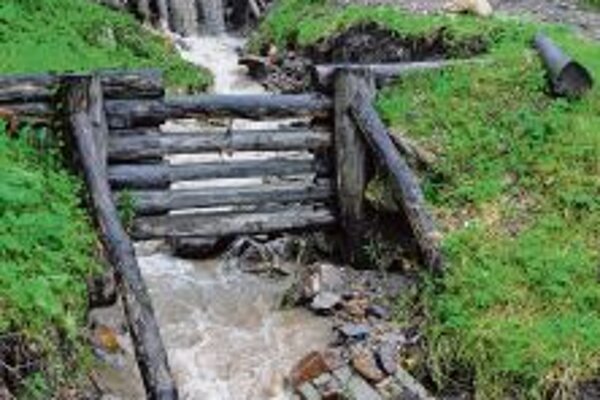 One of the water dykes. (Source: TASR)
Font size:A-|A+

THOUGH the Environment Ministry supports mostly traditional measures to tackle floods, like building concrete flood prevention structures and dredging riverbeds, several mayors of municipalities stricken by the mid-May deluge are praising projects implemented by the previous government of Iveta Radičová. Among them are water levees created in forests that are designed to retain rainwater in the soil and thus mitigate flooding in nearby villages.

“Without such measures, we would have worse problems than we actually had,” Ján Šejirman, mayor of Krivany, Sabinov district, told The Slovak Spectator.

Though Džugánová told Sme that traditional measures implemented by water managers, like deepening and paving the riverbed, also worked, without the levees retaining water in the soil these would not have been enough.

The Programme of Revitalisation of the Land and Integrated Management of River Basins in Slovakia was prepared by Martin Kováč, Radičová’s then government proxy for local administration, integrated management of river banks and land, in cooperation with Matej Michal Kravčík from the civic association Ľudia a voda (People and Water). It was based on three main principles: retaining rainwater where it falls, storing rainwater accumulated in the ground, and draining or diverting rainwater which the land cannot absorb.

A total of 488 municipalities participated in the programme, which helped to establish more than 60,000 various systems to retain water in the soil until it was halted in March 2012.

Thanks to the project, the measures were aimed at places where flooding begins, near the springs and in the country, Šejirman said. The state pays lots of money for removing the damage after floods, but not for such protective measures, he added.

“The way the levees were constructed was often unprofessional; they are often short-lived and have not withstood intensive rainfall, never mind floods,” he said.

Moreover, he noted the agreements that municipalities signed when they applied for money from the Government Office. They promised to keep the levees fully operational for 20 years. Since some of the levees are in poor condition and will not last as long, the municipalities may face problems in the future, Stano added.

The ministry introduced its own flood prevention strategy in late October 2013, based on conventional flood prevention measures like constructing dams, polders, water tanks and water pumps. The water managers should help municipalities to maintain river flows via dredging river beds and levelling river banks, according to the plan. The new measures are expected to cost €1.154 billion.

The ministry selected 559 localities that are most likely to be affected by flooding, most of which are located in eastern Slovakia. The officials plan to protect them by constructing around 600 different types of flood prevention systems. There will also be a new, effective system of early warning against flooding, Stano said.

The ministry has already reconstructed levees in Košice and Stará Ľubovňa, which helped to prevent more severe damage during the recent heavy rains, he added.

Šejirman, however, says that the state has failed to pass an effective concept of flood prevention since 1989. According to him, it is necessary to launch a process of revitalisation of the land and force farmers and foresters to do something to mitigate the negative impacts of floods and heavy rain. He also stressed the need to implement measures in small villages and not only in big towns. To solve these problems, the municipalities should be more involved in the process.