SLOVAK capital Bratislava travelled back 69 years on May 8, with military history enthusiasts re-enacting the battle to liberate the city from fascist occupation in the city centre. 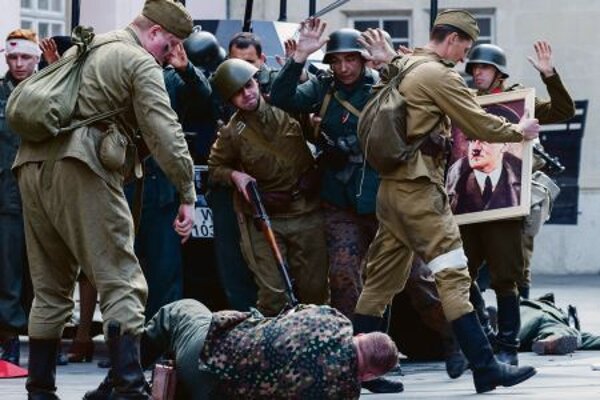 SLOVAK capital Bratislava travelled back 69 years on May 8, with military history enthusiasts re-enacting the battle to liberate the city from fascist occupation in the city centre.

The re-enactment was timed to coincide with the public holiday commemorating the victory over fascism in the Second World War.

“We’ve chosen a fragment of history in which a [Russian] reconnaissance unit enters the city and approaches the German troops,” said one of the event’s organisers, Igor Ballo, from the non-governmental organisation Sahara.

The clashes of April 1945 claimed the lives of approximately 740 Soviet and some 470 German and Hungarian servicemen, plus more than 100 civilians. The May 8 re-enactment featured nearly 60 members of several military history clubs.

Ballo told the TASR newswire that it is important to remember what happened in the past, as many people tend to idealise those days. “People can’t imagine history as real events,” he said.

“Battles were full of brutality and animosity; soldiers were dragged out [from buildings] and shot in the head. Until this battle, Bratislava hadn’t even been aware of what real warfare looked like. But these clashes were really cruel,” stressed Ballo.

The Military History Club Carpathia organised the Fights in the City 1945 event. In 2014, the battle was focused around the Primate’s Palace and the downtown capital.