SLOVAKIA has set a new record for low turnout in the elections to the European Parliament, with just 13.05 percent of Slovaks going to the polling stations on May 24, as experts cite voter fatigue from the recent presidential elections and a generally negative campaign as the main explanations. 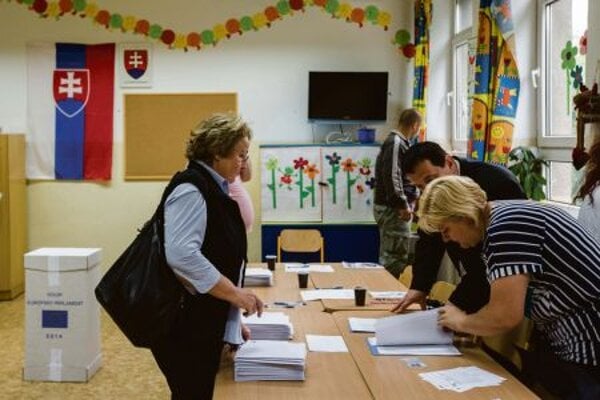 SLOVAKIA has set a new record for low turnout in the elections to the European Parliament, with just 13.05 percent of Slovaks going to the polling stations on May 24, as experts cite voter fatigue from the recent presidential elections and a generally negative campaign as the main explanations.

Observers were sceptical about any dramatic rise over the 19.64 percent turnout that Slovakia produced back in 2009, but some pundits predicted at least a moderate increase. The new low dropped below the turnout Slovakia posted in its first elections to the EP in 2004, at 16.96 percent, and came as a shock even to Slovaks themselves.

While local media reported that Smer won the EP elections with its support at 24 percent, president of the Institute for Public Affairs (IVO) Grigorij Mesežnikov suggested that the centrist and right-wing parties grouped in the European People’s Party were more successful.

The ruling Smer failed to defend its five mandates, inspiring comments that after the failure of party leader and Prime Minister Robert Fico in the presidential elections and after its candidate lost the run-off of the Banská Bystrica Region governor’s race against far-right extremist Marian Kotleba, the result is yet another signal that Smer’s dominance is weakening. Yet, Mesežnikov told The Slovak Spectator that it would be premature to say that “the elections are a sign of the decline of Smer”, pointing to the extraordinarily low turnout.

Fico nevertheless thanked the 13 percent of eligible voters who went to the polling stations, while at the same time adding that “he respects the decision of 87 percent of the citizens of Slovakia to use their right not to vote”. He added that the results suggest that the issue of the EP is not in the centre of voters’ attention in Slovakia.

The extremely low participation of voters does not allow for any political conclusions from the results of particular parties, according to Fico. The leader of the ruling Smer party, however, also blamed the media for the low turnout.

“The enduring disinterest of the media in the European agenda, which is often extraordinarily important, but is being presented in an unattractive and uninteresting way, has also underscored the record-low participation of the voters,” Fico said in the release.

All political parties in Slovakia should examine their consciences when it comes to the all-time lowest turnout in the May 24 EP elections, Maroš Šefčovič, the vice-president of the European Commission and commissioner for inter-institutional relations and administration, told the TASR newswire. Like Fico, Šefčovič also blamed the media for the low turnout, adding that “we need to explain to people that European issues concern us and have meaning for the public, and that it is not only about [prescribing the curvature of] cucumbers and bananas”.

Smer, with its 24.09 percent of the vote, will take four of Slovakia’s 13 seats in the EP. Šefčovič, as well as Monika Flašíková-Beňová, Boris Zala and Vladimír Maňka, will head to the EP.

The Christian Democratic Movement (KDH) harvested 13.21 percent of the vote, thus sending two deputies, Anna Záborská and Miroslav Mikolášik, to the EP. The Slovak Democratic and Christian Union (SDKÚ) received 7.75 percent of the vote and will have two mandates in the EP as well, with Ivan Štefanec and Eduard Kukan joining the EP.

Other parties will have one mandate each. Ordinary People and Independent Personalities (OĽaNO) received 7.46 percent and will send Branislav Škripek to the EP. The coalition of NOVA, the Conservative Democrats of Slovakia (KDS) and the Civil Conservative Party (OKS) collected 6.83 percent and its one mandate will go to Jana Žitňanská. Freedom and Solidarity (SaS) picked up 6.66 percent of the vote and Richard Sulík will take the mandate. The non-parliamentary Party of the Hungarian Community (SMK) got 6.53 percent and will send Pál Csáky to Brussels, while Most-Híd took 5.83 percent of the vote, with its mandate going to József Nagy.

Is Smer the winner?

Back in the 2009 EP election Smer won 32 percent of the vote and picked up five mandates. When introducing the slate for the EP race Fico said that he would consider it a success if the party wins five EP mandates again, a goal that the party failed to meet.

“Smer of course still remains the strongest party, but this trend, which is evolving over the long term, will develop towards the weakening of Fico’s party,” Mesežnikov told The Slovak Spectator, emphasising that turnout at just 13 percent blurs any potential conclusions.

Political scientist Miroslav Kusý agrees that the party underwent a crisis in the presidential elections when its candidate failed to win, and “this also has a great psychological impact on the voters, when in the next elections they recall this debacle”.
Slovak Academy of Sciences political scientist Juraj Marušiak would not offer any long-term prognosis based on the 13-percent election turnout.

“Smer keeps dominating opinion polls as far as parliamentary elections are concerned, even if it came out from the presidential elections weakened,” Marušiak told The Slovak Spectator.

However, according to Marušiak, it is clear that Smer could barely expect, under the current crisis, to repeat its “phenomenal success from 2012”. The problem could be that Smer was unable to offer voters any sufficiently convincing candidates, and a portion of its voter base stayed at home, he added.

“The other thing is that neither the traditional right-wing parties, such as the KDH and SDKÚ, gained more mandates than back in 2009, so one cannot talk about success from their perspective either,” Marušiak said.

The extremely low turnout benefitted parties like SaS and OĽaNO, political scientist Martin Klus told TASR, adding that in the polls these parties have lower support, but they probably managed to mobilise their electorate more effectively than other parties.

However, most of the right-wing parties see signs of encouragement in the election results. KDH chairman Ján Figeľ called the EP voting results “real encouragement for the party”, while SDKÚ chairman Pavol Frešo promptly interpreted the numbers as what he called an increasing trend of trust among the voters since the term of the new leadership of the party, according to the SITA newswire.

Pundits warn that the problem with the right-wing is its fragmentation and advise not to read too much into the EP vote results.

“I do not think that these results suggest any signs of unification of the right-wing; on the contrary, it continues to be fragmented; we have never had such a fragmented right-wing,” Kusý told The Slovak Spectator.

Moreover, the way the votes were distributed in the elections to the EP will not necessarily be repeated in the parliamentary elections, and thus the idea that seven to eight right-wing parties would make it into parliament at a 50-percent turnout is rather a risky assumption, Mesežnikov said.

According to him, however, some coalition strategies or a merger of some politically close parties will be needed.

Marušiak is also sceptical that the results of the EP vote might help unify the right wing.

“The alternative is building new democratic coalitions, because despite all the objections against Smer, one cannot turn this party into a second HZDS,” said Marušiak, referring to the Movement for a Democratic Slovakia, which pushed Slovakia to the brink of international isolation during its time in power in the mid 1990s.

Marušiak suggests that the entry of candidates from NOVA, SaS and OĽaNO into the EP means that along with fighting Smer, there is also a struggle within the right wing itself and that these parties will try to gain new voters at the expense of the KDH or the SDKÚ.

“To defeat Smer, they should try to persuade the voters that they offer a better positive alternative than organising new blocks, which will only polarise society and divide it into ‘for Fico’ and ‘against Fico’ camps, while eventually insulting the voters of Fico, ” Marušiak said.

Related articles:
Turnout hits record low
Slovak extremists out of the EP
Boosting the turnout
What is the legitimacy of MEPs elected by just a fraction of voters?