THE RESULTS of the European elections proved less interesting to Slovak voters than the scores of the ice-hockey championships in Belarus, whose semi-finals coincided with the elections on May 24. So suggests the voter turnout, which in Slovakia stood at barely over 13 percent – a historic low in a country already known for its notoriously low EP election turnout since joining the EU. 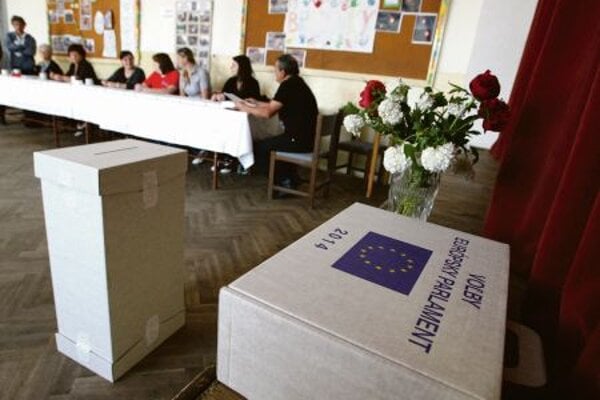 THE RESULTS of the European elections proved less interesting to Slovak voters than the scores of the ice-hockey championships in Belarus, whose semi-finals coincided with the elections on May 24. So suggests the voter turnout, which in Slovakia stood at barely over 13 percent – a historic low in a country already known for its notoriously low EP election turnout since joining the EU.

Not even Prime Minister Robert Fico, who turned up at his polling station in Bratislava just after the polls opened at 7:00, managed to help boost turnout to at least 20 percent, which some of the more optimistic observers and politicians were hoping for. Instead, Slovakia finished once again at the bottom of the list of EU countries in turnout.

Additionally, the gap between Slovakia and the Czech Republic, which this time around posted the second lowest turnout of 19.5 percent (compared to some 28 percent in previous two terms), was huge. No other country posted a turnout below 20 percent, even though the turnout was down in Poland (less than 23 percent compared to around 24 percent previously) and Hungary (less than 29 percent, down from 38 and 36 in the previous two terms).

Slovaks have become used to their position at the bottom of the turnout ranking, in 2004 with 17 percent and in 2009 with 19.6 percent.

The overall turnout around Europe remained practically unchanged compared to 2009, at 43 percent.
For the first time ever voter turnout did not drop compared to the previous elections. The so-called new EU member states (those which entered the EU after 2004) however mostly posted turnouts lower than the EU average.

For countries of central Europe this is the third-ever EP election, and that has not been enough “for the elections to become rooted in the political cultures of these countries”, Dariusz Kałan, a central Europe analyst from the Polish Institute of International Affairs, explained one of the reasons why he believes the new EU members post lower turnouts than their western counterparts.

Andrej Stuchlik from the Brussels Office of the Bertelsmann Foundation think tank noted that in central Europe the accession process was constructed and implemented “more or less as an elitist project from the very beginning”, with prime ministers and foreign ministries acting as gatekeepers.
“For instance, national parliamentarians were hardly involved at all and, at the same time, did not show too much interest in EU affairs either,” Stuchlik told The Slovak Spectator, adding that joining the EU has been politicised in some specific areas (such as exceptions in the accession treaties) but actively participating in EU decision-making has not.

“Turnout in the ‘old’ EU states, except where it is compulsory, is low and falling, but has not yet reached the level in Slovakia,” said Christopher Howarth from the London-based Open Europe think tank. “The ‘old’ EU states have more of a history of influencing the EU’s direction – something that was largely settled before Slovakia joined - and may be better able to convince their voters that they have influence.”

Pundits are blaming the low turnout on issues that are mostly not specific to Slovakia, but the country’s extremely low turnout is a problem exclusive to Slovakia. What is preventing Slovak voters from becoming more interested in the EP election?

Analyst Juraj Marušiak from the Slovak Academy of Sciences attributes this to what he calls “a peculiar expression of the Munich complex”, meaning Slovaks do not believe their country has any real chance of influencing anything in the world, “and therefore they voluntarily give up even those possibilities that they possess”.

Kałan pointed out what has become known as the Slovak paradox: citizens and politicians are generally supportive of the EU, but they display an unprecedented lack of interest in the votes.

“So, as one can say about the Czechs that they are passive eurosceptics, as they do not have a strong anti-European party whose programme would reflect the general anti-European moods of the society, Slovaks can be called passive euroenthusiasts,” Kałan told The Slovak Spectator, explaining that Slovaks are generally glad the country is part of the EU and the eurozone, but they see no reason for getting involved.

“Slovakia is a case in point, and although a majority of the citizens are still in favour of the EU (66 percent), at the same time they are not interested in EU politics as such, hence, quite logically, they do not perceive it as important to cast their vote,” Stuchlik said, admitting that the evolution of the EU as a political system and its future prospects is unfortunately debated only by experts, and these questions are not reaching a wider audience.

Howarth stressed that people in Slovakia do not lack interest or awareness about Europe, referring to EU surveys.

“The problem is that voters do not believe that their votes count,” Howarth told The Slovak Spectator. “The constituencies are large, the European Parliament is remote, and decisions are made between big political blocks that end up voting the same way on the majority of EU laws. This is why voters who wish to change and reform Europe do not see the European Parliament as the way to do it.”

The final turnout number not only took Brussels-based observers by surprise, but also exceeded the worst expectations of the pollsters, who prior to the elections estimated it at somewhere between 16 and 21 percent.

Sociologist Pavel Haulík of the MVK polling agency noted that turnout is always difficult to estimate because people tend to say they will go to vote and then change their mind on election day. He however admitted that this time around the difference between the actual turnout and the estimates was unusually high.

“It usually works where the respondent who considers going to vote expects some motivation from the parties and politicians to persuade him that the decision to vote for someone is right,” Haulík told The Slovak Spectator. “If the campaign fails to deliver such motivation, [the voter] chooses to stay at home.”

Observers of the Slovak political scene have been rather harsh in their reactions to the campaigns of the candidates and the parties running for Slovakia’s 13 seats in the EP, charging that they lacked the necessary drive to get out the vote.

Sociologist Oľga Gyarfášová from the Institute for Public Affairs think tank listed three reasons behind voters’ reluctance to vote: political parties taking the EP elections as a second order priority, the virtual invisibility of Slovakia’s MEPs until shortly before the elections, and the image of the EU as the “full larder”, which does not require the voter’s participation but rather endorses Slovaks’ attitudes as passive recipients.

“It is a whole range of reasons, a sort of vicious circle that is going to be hard to break,” Gyarfášová told The Slovak Spectator.