WE NOW know without a doubt that the renowned wooden altar of St James in the church of the same name in Levoča was made by Master Paul. The proof is in his signature, found on the statue of St John by restoration experts working on the altar. 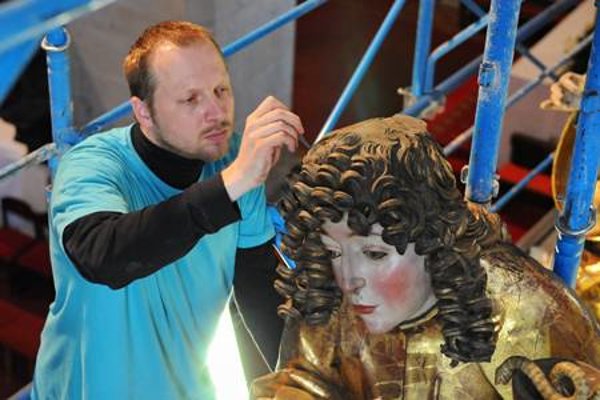 WE NOW know without a doubt that the renowned wooden altar of St James in the church of the same name in Levoča was made by Master Paul. The proof is in his signature, found on the statue of St John by restoration experts working on the altar.

“We knew already from the Koterba brothers [who restored the altar between 1952 and 1954, ed. note] that his signature is on St John’s statue – two crossed woodcarver’s markings,” Juraj Maták, a sculptor of the Regional Restoration Studio in Levoča, told the SITA newswire. “For a long time we had not been able to find it, and thanks to removing layers of dust and cleaning, we found it … on the bare wood in the back, on the right shoulder of John the Evangelist,” Maták explained.

Removing the layers of dust that had accumulated over the decades, along with detailed research, make up the second phase of the restoration work on the main altar. Last year saw the restoration of the altar’s extension, including the sculptures. The remaining restoration work will be carried out on site. Visitors can now see the statues of Virgin Mary, St John the Evangelist and St James from behind or from the side, as they have been placed on scaffolding.

Completion of the altar’s restoration was originally scheduled for Christmas 2014, but the project’s main sponsor, the German Messerschmidt Stiftung foundation, requested to extend the project until the following year.

The head of the Regional Restoration Studio in Levoča, Ivan Tkáč, said the sponsor had fears about the quality of the work done during the winter season, adding that “they also plan to publish a book about the altar and its restoration; and they would not manage to do that by Christmas.”

The German foundation is funding the second phase of the restoration, costing €123,480. The first phase, co-financed by the foundation and the Roman-Catholic Parish in Levoča, totalled €176,400.

Tkáč praised the work of their predecessors, the Koterba brothers, who “saved the altar from disintegrating, and it is also thanks to them that no bigger interventions are needed”, he said. After 60 years since the 1950s restoration, the professionals found no insects, proving how good a job they did, according to Tkáč.

Situated at the centre of the Square of Master Paul near the town hall, the St James Church is the biggest Gothic sacral building in the Spiš region and the second biggest in Slovakia. The church’s altar of St James is the tallest of its kind in the world, standing at 18.6 metres.

In 1993 the site was inscribed on the UNESCO World Heritage List as part of the complex of Levoča, the Spiš Castle and surrounding monuments.