RADOSLAV Procházka, who recently founded the Sieť party and is seen as a potential leader of a reconstituted centre-right in Slovakia, is facing allegations that the financing of his presidential campaign lacked transparency. On June 2, leader of the opposition Ordinary People and Independent Personalities (OĽaNO) party Igor Matovič claimed that Procházka attempted to purchase campaign ads from Matovič’s family-owned company, Regionpress, under the counter. 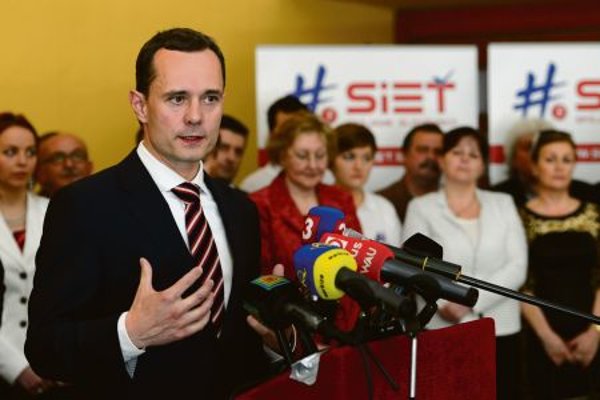 RADOSLAV Procházka, who recently founded the Sieť party and is seen as a potential leader of a reconstituted centre-right in Slovakia, is facing allegations that the financing of his presidential campaign lacked transparency. On June 2, leader of the opposition Ordinary People and Independent Personalities (OĽaNO) party Igor Matovič claimed that Procházka attempted to purchase campaign ads from Matovič’s family-owned company, Regionpress, under the counter.

Matovič alleged in front of journalists that Procházka suggested he should pay 50-90 percent of the total sum for the desired service in cash without a receipt, the TASR newswire reported. The total sum that he should have paid in line with the real price amounted to €17,200 with VAT. The ads were to be published in an advertising newspaper delivered to households around Slovakia free of charge.

“[Procházka] requested that I should participate directly in the illegal funding of his [presidential] campaign,” said Matovič, as quoted by TASR, adding that he turned the request down, and that the transaction between the two was then carried out legally.

Matovič admitted he had no witnesses to prove his allegations, as Procházka made his request in a private discussion, but he challenged Procházka to undergo a polygraph test.

“If it is proven that I have made it all up, I will leave politics for good,” said Matovič, adding that if the opposite is proved, he expects Procházka to leave instead.

This is not the first time Procházka has been put under pressure over his campaign financing. Officially, he declared his campaign cost €250,000, which political transparency watchdogs called improbable unless he received big discounts from the campaigning services, the Sme daily reported.
In response to Matovič’s allegations, Procházka claimed he would take the lie-detector test along with the head of his campaign, Martin Dubéci, but he certainly will not debate the conditions with Matovič.

“No agreements can be made with a psychopath,” he said, as quoted by TASR.

According to invoices, Procházka paid a total of €17,224, including VAT worth €2,870, for ads in the papers of the Regionpress publishing house, Dubéci told journalists, as reported by TASR.

Procházka stated at a press conference in parliament on June 3 that he sought to fund his campaign via a transparent account at all times. Nevertheless, he conceded that “a few thousands euros, or so” went astray, pointing an accusatory finger at his campaign chief Dubéci and staff member Andrej Zmeček. Procházka claims that he learned about the accusations only on June 2, after Matovič went public with them.

“I gave the guys a telling off for this,” said Procházka, as quoted by TASR, adding that he had explicitly told them to fund everything only from the transparent account.

The “guys” only wanted to help him, however, he said. He also stated that shortly before election day, Matovič sent him several short text messages for being two days late with payments for the ads. Matovič allegedly threatened to organise a press conference at which he would reveal that Procházka and his team are fraudsters.

“I feel thankful towards Andrej Zmeček and Martin Dubéci. For a while, I was angry, but this was the price for not having a rich sponsor,” he concluded. Procházka claims that all donations he received have been listed on the report for the Finance Ministry, including a gift from Zmeček.

The discrepancy in claims that he received €20,000 and the report which states €10,000 can be allegedly explained by the fact that the report for the ministry includes only items from the last 15 days before the election.

Procházka told journalists that he was only aware of €20,000 going over and above the official account. If any further illicit funds appear, the media should ask Dubéci and Zmeček, he concluded, claiming that he has not spoken to either of them recently, because his mobile phone “has broken down”, TASR reported.